Having made the move from Shakhtar Donetsk to Borussia Dortmund, Henrikh Mkhitaryan endured a mixed start under the Bundesliga side’s then manager, Jurgen Klopp. But by the end of his time at the club, with new boss Thomas Tuchel in place, he was being named the best player in the league, and also featured in the Team of the Season as voted for by his peers.

“It was a very hard period for me. The first season was OK, but the second season was a disaster, not only for me, but also for the club,” said Mkhitaryan of his time in Germany.

“Thomas Tuchel, came to Dortmund before my third season, and he changed everything for me. He came to me and said, ‘Listen, I want to get everything out of you. He looked at me very seriously, and said, ‘Micki, you are going to be great.’”

After moving from his hometown club FC Pyunik, the Armenian international spent four seasons in the Ukrainian city of Donetsk, playing for both Metalurh and Shakhtar, impressing clubs around Europe with his pacy attacking displays littered with a healthy dose of creativity. In his last season at Shakhtar he netted 29 goals in all competitions, and also contributed 12 assists.

His transfer to the Bundesliga was a step up in standard in terms of the quality of the domestic league, and despite that slow start he was able to score 23 goals and make an incredible 32 assists in all competitions during his final season, meaning he was contributing to a goal every 88 minutes.

These performances alerted the usual suspects across Europe, and though his agent, Mino Raiola, says he was very close to joining another Premier League club, it was Manchester United who got the deal done.

“We had almost agreed with another Premier League club,” said Raiola. “But Dortmund wouldn’t let him go, then United pushed it over the line.”

“I am delighted he has chosen to sign for United,” said his new manager José Mourinho.

“I believe he will make an impact on the team very quickly as his style of play is suited to the Premier League. We are all looking forward to working with him.”

But the attacking midfielder struggled, as he had in his second season at Dortmund, and found himself on the fringes of the squad.

Having started the season on the bench, he made his first start against Manchester City but was substituted at half time in a 2-1 defeat at Old Trafford.

In his first term at the club he showed glimpses of the player he can be, especially in a number of outings in the EFL Cup and Europa League, but overall it was a disappointing start to life in the Premier League, as he finished the season with just four goals and a solitary assist in the league.

He was mostly utilised on the wing, on the left or the right such is his versatility, and occasionally as an attacking midfielder. But at the start of the 2017/18 season he finally seems to have found his feet, and his role.

He’s started every Premier League game so far this season, and in the four games he’s played as an attacking midfielder, just behind United’s new striker Romelu Lukaku, he’s supplied five assists and scored one goal.

It’s a complete turnaround for the Armenian who is now given a creative role as United use Lukaku, Marcus Rashford, and Anthony Martial to get the goals while Mkhitaryan uses his pace and vision to scheme in midfield off the front three.

His creative stats are already far ahead of last years in terms of total key passes, and as the graphic shows his productivity per 90 minutes is also at a high level in terms of making chances for his team-mates. 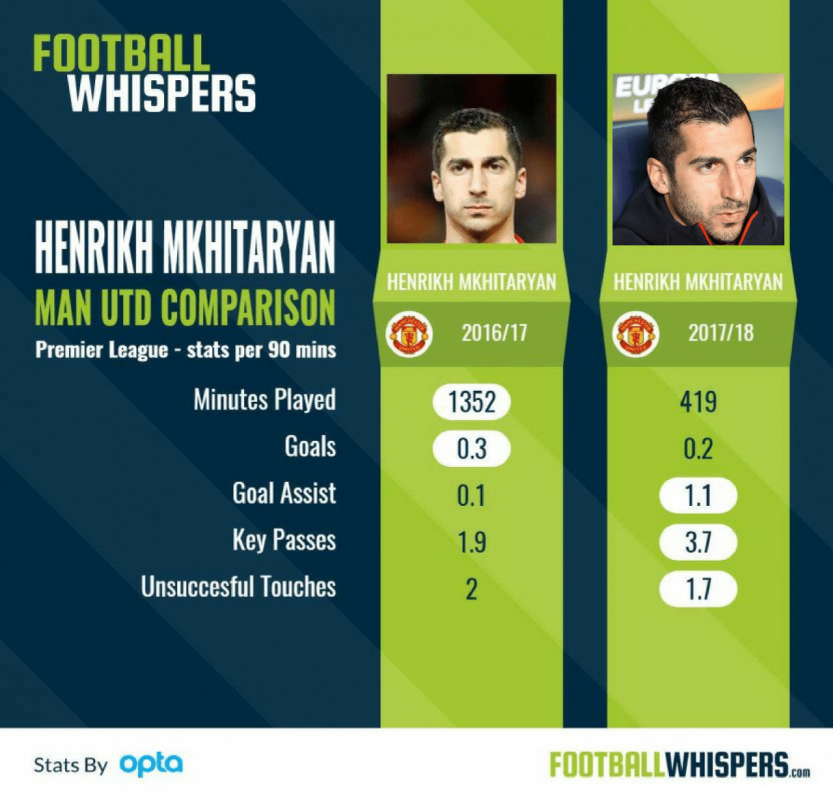 Even if he doesn’t increase his goal tally as the season progresses, which seems unlikely, he’ll still play a vital part in any success those in front of him are to have, especially Lukaku. He’s assisted two goals for the Belgian already as the pair look to strike an attacking partnership.

“You have to stay positive, you have to stay strong and work very hard because in one click everything can change and that's what happened,” the 28-year-old told ESPN recently.

“I am ready to play wherever they want me to play. I don't have a preference in a position. I like to play and if I'm playing I will try my best if I'm in the middle, on the wing, on the side or up front. It doesn't matter.”

It’s a familiar turnaround in the career of a player who’s had the occasional slump but has always come through the other side with flying colours.

If Mourinho’s side are to go on and win the trophies the team and their fans crave this season, then Mkhitaryan will be a big part of any success they have in this new era for the club.