Jordan Henderson is well into his ninth season as a Liverpool player. Yet for seven of those years, fans debated whether or not he was good enough to start for the Merseysiders.

The Reds used to have many divisive players within their ranks but the skipper seemed to dominate the where can the team be upgraded conversation.

That was until recently.

Towards the business end of the 2018/19 season, the Liverpool No.14 stepped up. Fabinho’s dominance in the middle third unshackled Henderson and he showed glimpses of the 2013/14 version of himself. He was relishing the chaotic moments in the final third, linking up well with Trent Alexander-Arnold and Mohamed Salah and, perhaps most importantly, there was a clear purpose to his game. 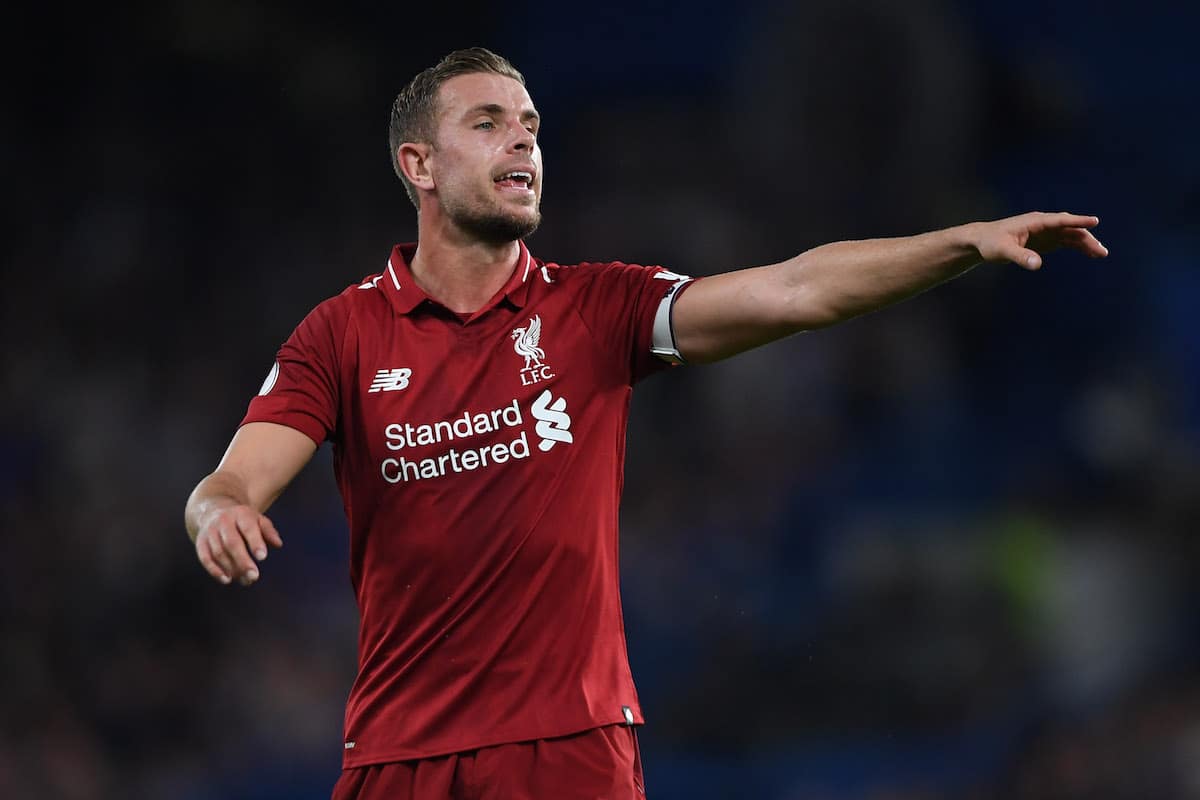 In the box-to-box role, Henderson was thriving. His output was still a talking point for some but, generally, he was influencing play. This carried over into the new campaign. Freed from the number six role, the Liverpool captain appeared to have a new lease of life marauding down the right flank for the Reds. At one stage during the clash against Manchester United, he was being used as a right-winger, just as he was during his debut season at Anfield.

But that quickly changed. The Brazilian destroyer suffered ankle ligament damage against Napoli and fans braced themselves for a dip in form. While Henderson did an admirable job as the midfield general for a number of years, he was, by comparison, fairly limited and often extremely passive. While Fabinho would try to play that incisive ball over the top, the captain would instead look to retain possession.

At times frustrating, there was a feeling that with Henderson as the deepest midfielder, the Reds lacked a bit of tempo. But in Fabinho’s absence, the league leaders have been at their dominant best and the England international is rightly being lauded for his performances.

People won’t like to admit it but the 29-year-old hadn’t had many standout moments as Liverpool skipper. Always professional, Henderson could never be accused of not giving his all. What was missing was a captain’s performance.

But his showing against Barcelona in the historic Champions League victory changed that. On the night, he was everywhere and the hug he received from Jürgen Klopp after collapsing into his arms at full-time was the very least he deserved.

The challenge was for him to do that again. And again.

Very few, however, expected him to string together the run of performances he’s managed since replacing Fabinho in that No.6 position. He’s been utterly dominant for more than a month now.

Henderson finally looks like a Liverpool leader on the pitch. The confidence gained from lifting the Champions League trophy, followed by the Super Cup and, finally, the Club World Cup seems to have lifted a weight off of his shoulders.

Overnight he went from being the man who replaced the legendary Steven Gerrard as Liverpool skipper to being a European Cup-winning captain. There’s now a self-belief to his game that he’d previously been lacking.

There's now a swagger to his game.

Klopp once said that for Sadio Mané to be a world-class player he needed to get used to the fact he’s world-class. The same logic could be applied to Henderson. For the majority of his Liverpool career, he’s been in Gerrard's shadow. Now out of it, he looks the real deal. And for those thinking the Reds would suffer without Fabinho sitting in front of the defence, the form being shown by the Sunderland-born midfielder is ominous.

What he's done, to completely change his game, is nothing short of remarkable. It is the sort of thing Gini Wijnaldum and Roberto Firmino are often praised for. 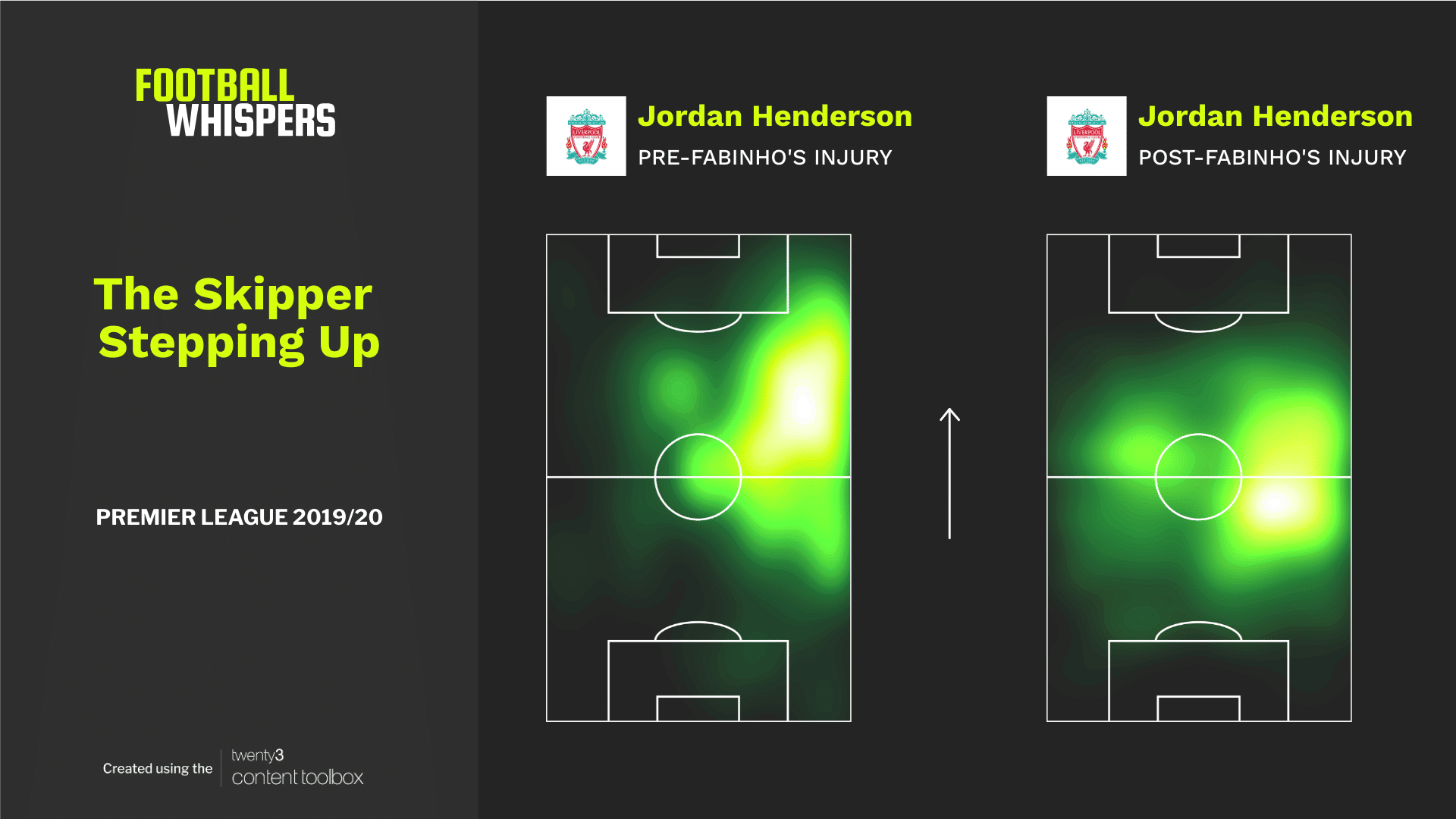 Henderson went from averaging 72 touches when Fabinho was starting to surpassing the 100 mark on a per 90 basis. He's now averaging 98 passes, well up on the 55 he was attempting prior to the Brazilian's injury.

The Liverpool skipper has dramatically improved his passing accuracy, too, finding a team-mate with 90 per cent of his attempted passes. Previously, when he was being deployed in a more advanced role, his average was down at 77 per cent. Despite his change in role, Henderson is braver than this time last year. Dribbles are up, forward passes have risen, long pass accuracy is 40 per cent better off and final-third entries have tripled.

This is a new Henderson. He was named as the Man-of-the-Match in Liverpool's 2-0 win over Sheffield United and Klopp heaped praised on him afterwards.

“Gini (Wijnaldum) and Hendo, especially, because they have had to play the biggest number of games this season,” the German said.

“What they do is just incredible – absolutely incredible. I do not take that for granted for one second. If anybody who is with us still doesn't see the quality of Jordan Henderson, then I cannot help them.”

From pundits to fans to the manager, everyone is noticing Henderson's performances. To stand out in a team containing Virgil van Dijk, Alexander-Arnold, Salah and Mané takes some doing. Yet Liverpool's No.14 is doing just that. For the first time in a long time, the captain looks at ease in his environment, and the world champions look better for it.