Going into this weekend’s huge fixture against Manchester City at the Emirates, Arsenal need to find a way to expose Pep Guardiola’s defence in order to push them back into the top four race.

All eyes will be on Alexis Sanchez and whatever combination of forwards Arsène Wenger picks from the start, but elsewhere, there are battles that the Gunners can win.

The midfield selection will be interesting. City have struggled defensively in the middle of the park, and the home side could dominate there, which could create some space down the flanks.

“I think it's not only the period that matters – it is a decisive period – but also what is at stake for us is how we respond mentally to a disappointing period and how much we can focus and stick together now,” Arsène Wenger admitted during Thursday’s pre-match press conference.

“We come out of a difficult period and we play at home in a very big game. It's a good opportunity for us to bounce back. I think it's two teams who, when you look at the numbers, have the best numbers of the final third in the league.”

“That promises to be a very positive, attacking game. Both teams will attack – they go for it, we go for it, so it should be a promising game.”

Exposed by Monaco in Europe 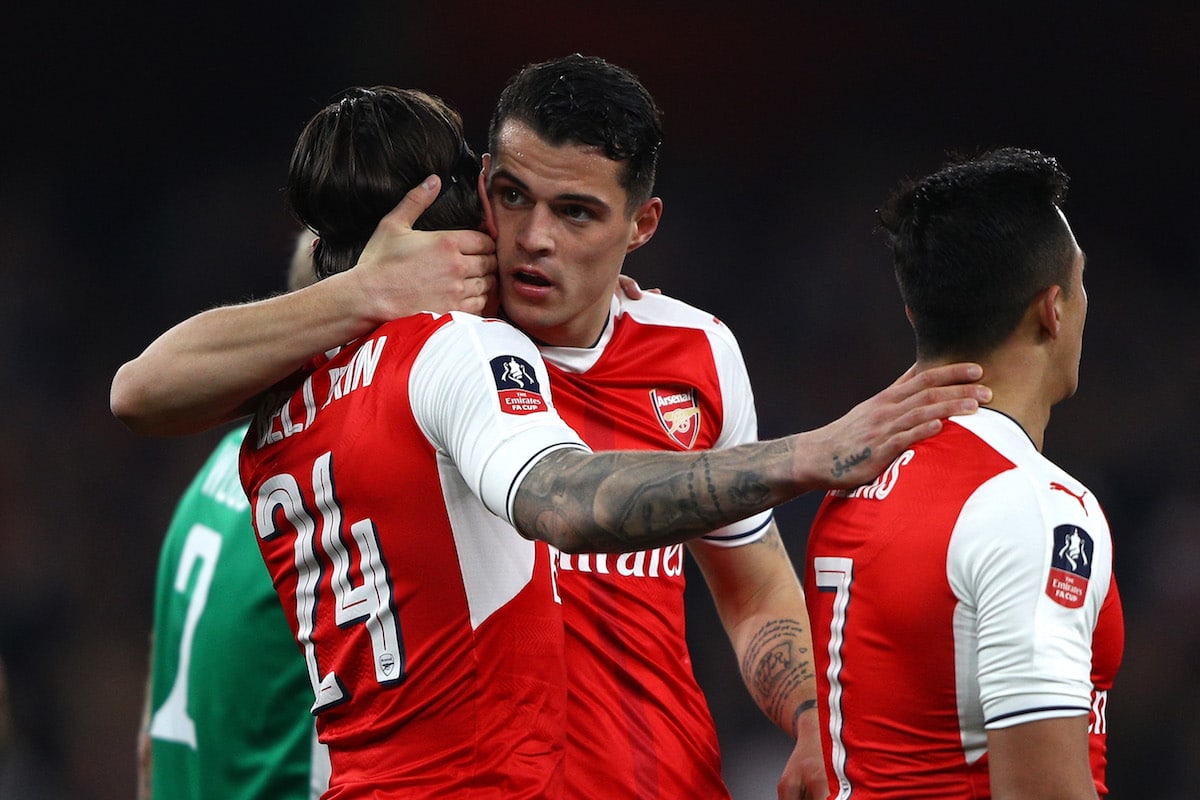 In the 6-6 UEFA Champions League defeat to Monaco, the French side were very successful in breaking down the flanks. Both Benjamin Mendy at left-back and Djibril Sidibé on the opposite side were constant threats.

While Nacho Monreal has struggled this term, the 31-year-old is slowing up and isn’t the attack force he used to be, the threat will come on the right-hand side.

Héctor Bellerín, just 12 months ago, was rated as one of the best right-backs in Europe, yet the truth is, his numbers and consistency has dropped over the past two seasons.

The Spanish full-back has been one of the biggest victims of Wenger’s slump this term, although it hasn’t stopped him being linked with a move to Barcelona and summer target for Manchester City.

“Any player in the world would be very excited to know that Barça are interested, it is very nice to get recognised by Barcelona,” the defender told Cadena SER.

“My departure from Barca was a bit bittersweet because of the treatment from some people.

“I was not treated the way I would have liked to but it is clear that if Barcelona are interested it would be difficult to say no.”

Bellerín’s Drop in Form and Numbers 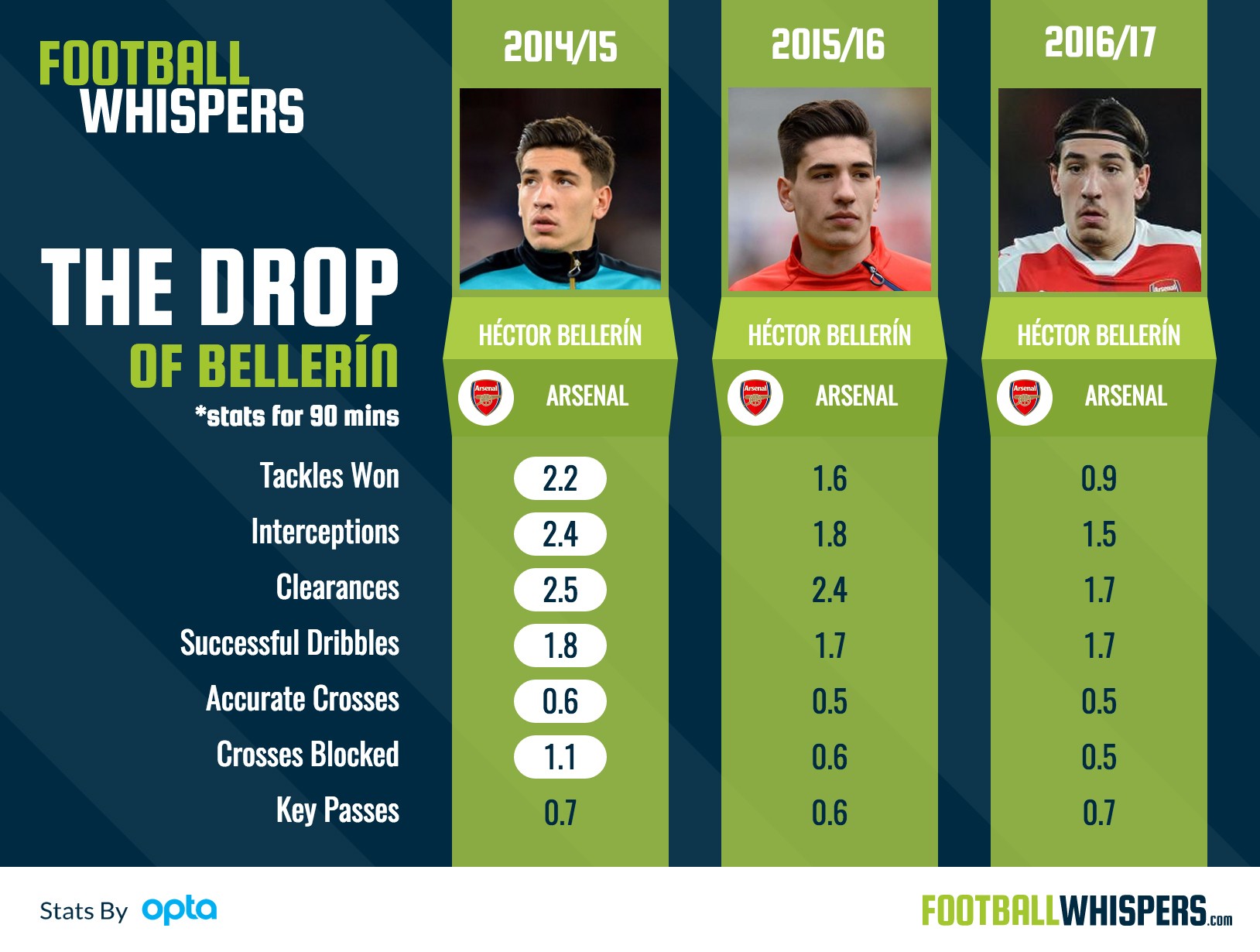 Since 2014, Bellerín’s numbers have dropped. Going from 2.2 tackles per 90 minutes to 1.6 and 0.9 this term. Interceptions and clearances have also fallen.

His completed dribbles have stayed around this same level in 1.8 and 1.7 per 90 minutes. Bellerín is also blocking fewer crosses. The only two areas that have stayed very similar are in attack.

The Spanish Under-21 international makes 0.5 accurate crosses per game and 0.7 key passes, making sure he is still a danger in the final third.

And that is where Arsenal need him more. Defensive mistakes will come and go, plus, playing against City’s sensational attack, you must accept that they will create chances regardless. To get the better of the Manchester side, you need to hit on the break and force spaces in between the full backs and centre-backs.

Where can Bellerín trouble City?

Playing against Stoke City earlier in the season, the way Arsenal keep the ball central, using lots of short passes, draws the defence inside. While they are trying to track the four forward players, Bellerín (red), is able to advance down the right.

Free to pick a pass out right, the Spaniard is able to play a great ball into the middle and Arsenal score.

Bellerín was able to get in behind the back four, the same way that Monaco did to City. That’s where they were weakest and it’s an area that Arsenal could take advantage of, but to do that, they need the former Barcelona defender to regain the form that made him a wanted man.

Too often now in modern football, full-backs are praised for their attacking football and deficiencies around their defensive work are ignored. Yet, for Arsenal to have a chance of threatening the Manchester City back-line on Sunday, they need Bellerín’s attacking qualities to shine through more than what he does at the back.

Whether it’s 4-3-3 or 4-2-3-1, the Gunners midfield will need to work extra hard to cover the space in behind, allowing Bellerín more space to get down the flank.

Do that, and they might have a chance to reduce their gap to City to four points with a game in hand.

Things we learned from Arsenal's 3-1 defeat to West Brom