There are only a handful of clubs in the current transfer market who are untouchable. Finishing fifth in the Premier League, Arsenal are not one of them.

Vultures are continuing to swirl around the Emirates, looking to pounce when Alexis Sánchez or Mesut Özil decide to continue their career away from North London. Another is Barcelona transfer target Héctor Bellerín, with the Spanish full-back attracting admiring glances from both the Catalan giants and Manchester City.

Spanish newspaper Sport decided on their front page on Monday that the English club couldn’t afford the €50million asking price for the 22-year-old, no mention of them preferring to sigh Kyle Walker for Tottenham Hotspur.

Then on Wednesday, according to Spanish outlet RAC1, conditions between the right-back and the Spanish club had been agreed, with only a fee with Arsenal remaining to seal the deal.

Barcelona are in the market for a right-back and because he was first formed through their academy…and Spanish, he is the perfect option for the Blaugrana.

Should Arsenal listen to Bellerín offers?

On one hand, Arsenal should hold firm. During the 2015/16 campaign, Bellerín was undoubtedly one of the best players in his position, if not the most impressive. Regardless of price, if you want to compete against the best teams and qualify once again for the UEFA Champions League, you must grow your squad, not be picked apart.

However, this season, the Spaniard’s performances were nowhere near the same level. Gaps in his defensive positioning began to show and it wasn’t until the switch to 3-4-3, where he still had to battle with Alex Oxlade-Chamberlain for minutes, when he looked a lot more comfortable.

Shouldn’t Arsenal listen to offers if they are somewhere near what Sport are reporting, it would be rude not to listen.

Bellerín himself is not ruling out a move back to the Catalan club, speaking in a lengthy interview with El Mundo this week:

“It’s nice to know of the interest of a club like Barcelona, the club I grew up at from a young age,” he said.  “At the moment I don’t know anything, I’m an Arsenal player and we’ll see what happens.”

He’s not throwing himself at the Spanish giants, but in the same way he’s not flying the Gunners flag from the mast.

“It’s not something you think about when you leave, because you never know how things are going to go,” he continued. “I had the luck to bet on Arsenal, it’s gone well for me, and now to receive this kind of news about Barcelona is something that makes me happy, but it doesn’t just depend on me.”

For context, this is a Barcelona born player who is constantly asked about a return when he comes to play for the national team. There are only so many ways you can politely answer the question. He doesn’t want to limit his options only to look silly when what you were quoted against goes on to happen.

Is Bellerín Worth Fighting For? 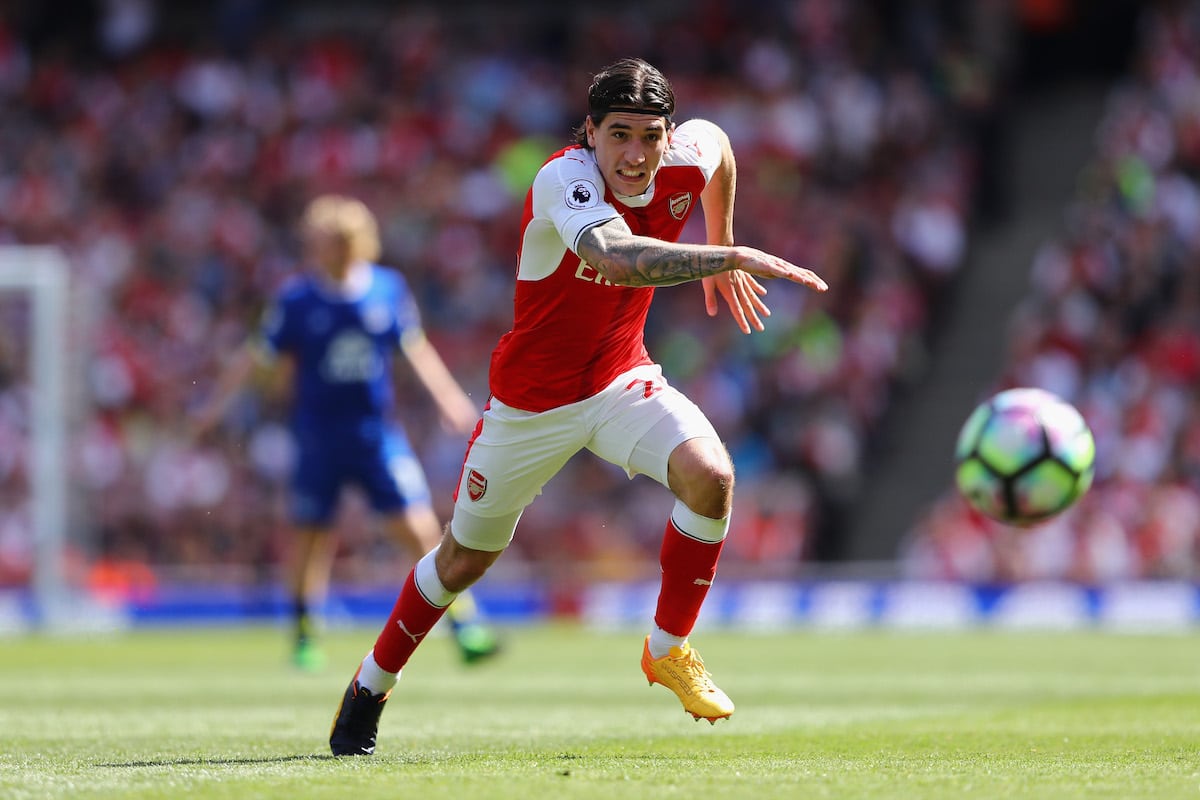 In November last year, the 22-year-old put pen to paper on a new six-year-deal, that runs until 2023. It would take a huge offer to get Arsenal to do business, which is where the €50million value will likely come from.

Given that level of profit on the youngster, it would be ridiculous for Arsenal not to listen. They could easily replace the Spaniard with several options. Monaco’s Djibril Sidibé, Ricardo Pereira of Porto and Benfica’s Nelson Semedo would all be available for no more than half of what they could receive for Bellerín.

“There was a change of system, I spoke with the boss and he explained to me that with this new system he preferred to play with different kinds of players,” the defender answered when asked why he lost his place this season.

“As a footballer you have to accept that and work hard to change his mind. After injuries and other factors, I took advantage of the opportunity to come back into the team, and I could finish the season as I wanted.”

Arsenal are also on the verge of signing Oxlade-Chamberlain on a new deal, and it was the Englishman who Wenger preferred in the role once the French boss changed to 3-4-3. Bellerín seems a perfect fit for that role, giving him more space to get forward and protection behind him, but that’s obviously not the case in the coach’s mind. 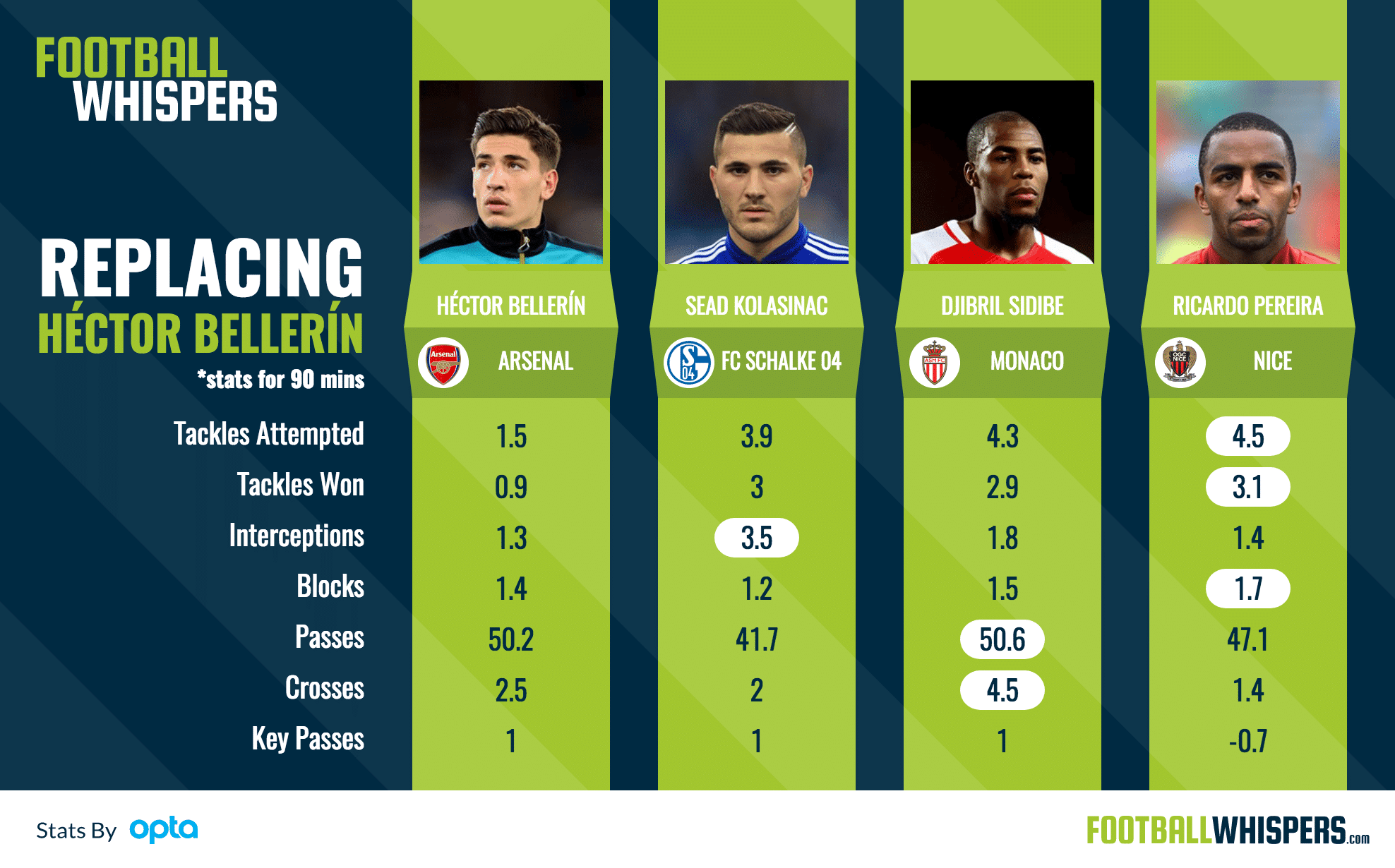 Read More: Spotted in Nice – Who is Wenger Targeting for Arsenal

When you compare Bellerín’s stats to, not just the potential replacements, but Sead Kolasinac, signed by Arsenal on a five-year deal to play on the opposite flank, the Spanish right-back fails in almost every category.

Ricardo and Sidibé attempt and win more tackles, and they just edge the Arsenal man in terms of interceptions and blocks – be it shots, passes, or crosses.

The Portuguese right-back, who spent the season on loan at Nice makes the most key passes, but is beaten by the Monaco man in terms to attempting crosses.

With Wenger’s new signing, you are getting a defender who can play in a back four and as a wing-back, just like Bellerín, but his numbers in terms of defensive actions are more than double what the Spaniard offers.

The current Arsenal defender doesn’t offer any more than any of the other full-backs can. That doesn’t make him a bad player, far from it, however, it means he far from irreplaceable.

If new Barcelona boss Ernesto Valverde decides that the Spain Under-21 international is the man for his team, and they are willing to pay something between €40-50million, then Arsenal should willingly accept. There are other right-backs out there and they offer just as much as Bellerín.