Hebei take on Shanghai Port in the Chinese Super League on Saturday, June 11th. Both teams are still searching for their first point of the new campaign. Read our free predictions and find the latest odds for the fixture below in our detailed match preview.

Can Shanghai Port bounce back from their derby day defeat with a better performance at Hebei on Saturday? Read our top three predictions for this weekend’s fixture below.

Both Hebei and Shanghai Port suffered defeats in each of their two opening fixtures of the new campaign, though the visitor’s latest setback would have put a major dent in their confidence ahead of Saturday’s game. Port were beaten by city rivals Shanghai Shenhua in a disappointing derby and with the self-belief weakened, they could be worth opposing at Hebei this weekend.

Hebei and Shanghai Port have shared problems in defence in the early throes of the new Super League season and both backlines are still searching for a first clean sheet. Indeed, the ropy rearguard have shipped nine goals between them across four games and neither unit should be expected to record a shut out on Saturday. With that considered, a stake on both teams to score appeals at the prices on offer.

Top Betting Odds and Stats for Hebei vs Shanghai Port

View our rundown of the best stats for Saturday’s match below alongside a tool to help you choose the best odds.

You can find all of the most up to date team news and injury updates for Saturday’s Chinese Super League tussle between Hebei and Shanghai Port below.

A last-minute goal from Felicio Brown Forbes denied Hebei a share of the spoils at Wuhan Yangtze on Tuesday evening, though there were enough positives on show to suggest that better results could be around the corner. Manager Kim Jong-Boo only made one sub in midweek, which suggests he is happy with is XI.

Shanghai Port's derby defeat to city rivals Shenhua in midweek is likely to have consequences for a number of the players who started. Four players including Brazilian Paulinho were introduced off the bench on Wednesday and that quartet could all be in from the off on Saturday. 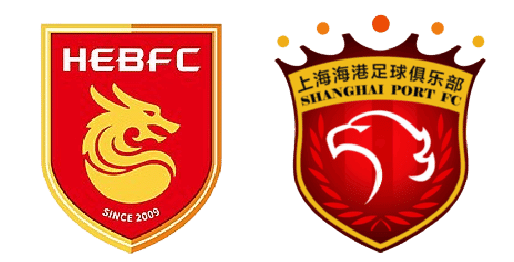 Kim Jong-Boo is currently in charge at Hebei having joined the club in March last year.