Hearts are on a terrific run of form at the moment. Can they keep it up as Inverness CT come to town? Find out with our Hearts vs Inverness CT match preview with free tips, predictions and odds mentioned along the way.

Hearts vs Inverness CT: Our picks

Another game unbeaten for Hearts

Hearts currently top group A having won all of their games so far. Their form in all competitions has been fantastic too; they've won five games on the spin and are unbeaten in eight having recorded two draws and another win on top of the last five; one of those six victories came against Inverness CT. It forms just a small part of a tremendous head to head run as well; Inverness CT haven't beaten Hearts since back in 2015 – they've met 12 times since. With Inverness having lost to Cove Rangers last time out, it's hard to see them bouncing back against a serious bogey team.

On top of the unbeaten run we mentioned in our first prediction, Hearts are also on a streak of clean sheets. They've not conceded in any of their last eight matches. That does include a 3-0 win over Inverness CT but we have a feeling the hosts' shutout streak is about to end. As we say, Inverness CT blanked against Hearts last time out but haven't failed to score in seven games since. They've also found the net in six of the last 10 head to head meetings. Hearts' run has been seriously impressive but all good things come to an end. The silver lining is that the home side will still win the match.

A bucket full of goals

With the prediction made that Hearts beat Inverness CT not to nil tells you we think there will be at least three goals. What it doesn't do is explain why. Hearts have seen a total of 14 goals in their past five matches, which is a game average of 2.8. As for Inverness CT, their last five matches have served up a total of 13; that's an average of 2.6 per match. Six of the last 10 h2h meetings have gone over 2.5 too.

Check out the recent form ahead of Hearts vs Inverness CT

At this moment in time, every time Hearts walk out on the pitch they are expecting to win; that is what consistently getting results does for confidence of a squad. With three wins from three in the league cup the orders will be for more of the same. If the same pattern unfolds as in the last few games then Liam Boyce will be amongst the goals; he's scored in every game so far. Inverness CT, however, will be looking to stop Hearts in their tracks. Their own form had been alright until their disheartening defeat last time out against Cove Rangers. They need to bounce back; can Kirk Broadfoot and co provide a solid base for which Inverness CT can build? 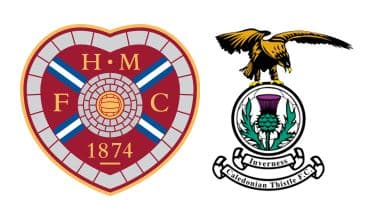