Whilst megastars like Cristiano Ronaldo and Romelu Lukaku light up the European Championships spare a thought for the likes of HB and Inter Club d'Escaldes who kick their seasons off in late June. Who will record a historic win? Find out with our HB vs Inter Club d'Escaldes match preview with free tips, predictions and odds mentioned along the way.

HB to progress to the next round

HB have never progressed deeper than the second qualifying round of the Champions League and we expect them to at least equal that this year. Under the UEFA coefficient ratings, the league they ply their trade in is better than that of Inter Club d'Escaldes and, more crucially, they arrive in better form than Inter Club d'Escaldes. Inter Club d'Escaldes aren't in woeful form having suffered just two defeats in 10 but they've had four draws in that time too. HB meanwhile have lost just one and drawn another; that means they've won eight.

We expect it to be a tight one

We might be making the prediction that HB win the match but, for the exception of their fans, it's unlikely to be a memorable match. We just don't think the two sides will serve up much in the way of goals. HB have served up a total of 11 goals across their last five – an average of 2.2 – but even then six of those goals came in one match; three of their last five have come in under 2.5. Inter Club d'Escaldes have seen slightly more goal action with 13 goals in their last five but, again, only two matches have seen three or more goals.

Our final prediction could be seen as a fairly bold one as we're tipping Inter Club d'Escaldes to blank in the match; they've scored in seven of their last 10 matches. The flip side of that is that they've only scored more than one goal in three of 10, which means they're far from prolific in front of goal. Then you have HB to consider; they have the second best defensive record in the Effodeildin, have kept seven clean sheets in 10 and conceded just five goals in that time.

HB vs Inter Club d'Escaldes: Where can you find the best odds?

The best odds will show here when available

HB come into this match off the back of a strong run of form and will see Inter Club d'Escaldes as a side they can unquestionably beat – albeit they won't just roll over with their own form far from poor. One of the biggest assets is a solid defence; remarkably, the average age of their first choice backline is just 23. Daniel Johansen, who operates at left back, is perhaps the main one to watch. At the top end of the pitch, Danish forward Mikkel Dahl carries the biggest goal threat after hitting 12 in 12 so far this season. For Inter Club d'Escaldes, their talisman will be up against Johansen; that battle could prove key with experienced Spaniard Genis Soldevila having scored 14 goals and provided five assists from the right wing last season. 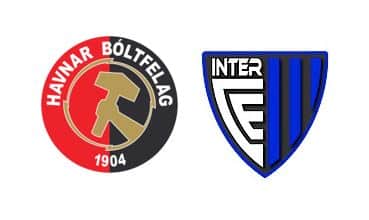