One of the great sights in the Premier League era has been watching Eden Hazard making a fool of defenders.

The Belgian is a joy to watch. His masterful, jinking runs have become a staple of Chelsea's attacking blueprint over the past six years, leading opponents on a merry chase before going for the jugular.

Hazard with the ball at his feet, cutting in menacingly from the left flank, feigning this way and that before pulling the trigger: it's a nightmarish sequence for most defenders. It's often difficult to know what way those hips are going to swing and if even if they guess correctly, it's equally as difficult stopping him.

But much has been made of how Hazard has evolved under Maurizio Sarri. The Italian, whose influence at Stamford Bridge has been swift and significant, views Chelsea's star man as an out-and-out goalscorer, someone, he thinks, is capable of scoring 40 times in a season.

And while it remains to be seen whether or not the 27-year-old can dethrone Liverpool‘s Mohamed Salah as the Premier League's leading marksman, it is true that Hazard has altered his game slightly, adapting his game to the unique demands of playing in Sarri's system.

For a start, Hazard has had more joy finding the back of the net. With seven strikes this term, his goals per 90 ratio is 0.8, a vast improvement on last season's 0.44. At this rate, the former Lille winger is well on course to surpass his 12-goal haul during Antonio Conte's final year in charge.

Of course, that was perhaps to be expected with how Sarri's teams tend to dominate possession (this season, the Blues have increased their average duration in possession from 13.55 to 17.08 seconds). What is surprising, though, is how Sarri's arrival has impacted Hazard's dribbling.

Last season, he completed more take-ons in total and per 90 – 165 and 6.1 respectively – than any other player in his position. Such numbers have taken a mighty hit under Sarri though. His per 90 average is down to 3.33.

Has that adversely impacted Hazard's output? Not at all. In fact, with Hazard being instructed by Sarri to focus more on goalscoring, he is attempting more shots and touching the ball more times in the opponent's box each game.

He remains the same devastating player. Sarri has deployed him on the left, but with more emphasis on building attacks through passing as opposed to dribbling. Hazard is one of the most intelligent movers off the ball, too, so it has brought out the best in his natural inclination to find space in behind the back-line.

While he retains the ability to fly past defenders at ease, leaving them in a bamboozled daze, Hazard has been focused on scoring. Look at his heat map for last season compared to this. 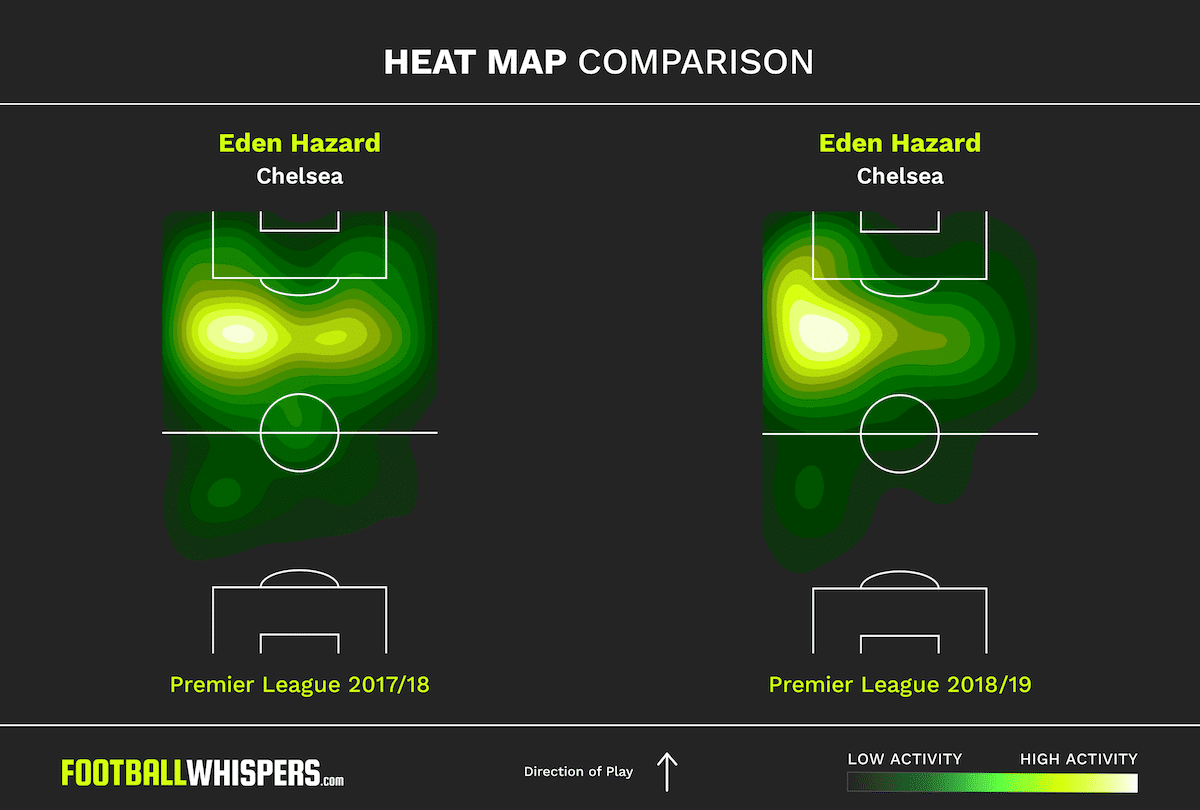 While they are not drastically different, his actions under Sarri have been much more focused and consistent in the final third whereas under Conte he was, at times, being pulled into defensive actions.

He remains as dangerous as ever. With Sarri having breathed new life into Chelsea, the Belgian – like many of his teammates – is thriving. Hazard has never reached 20 goals in a season for Chelsea. This season, he looks dead-set on smashing that particular ceiling.