Major League Soccer took to Andrea Pirlo as quickly as the rest of world soccer. There’s just something about the Italian that appeals to all. Maybe it’s the way everything seems so effortless to him, or the way he can manipulate a soccer pitch with the slightest movement. Whatever it is, the 37-year-old is a rare universal figure of adoration. No Pirlo, no party, as they say.

However, the party hasn’t been so wild recently. Pirlo was dropped by New York City FC head coach Patrick Vieira for the games against the Columbus Crew, Atlanta United and FC Dallas with the Bronx side picking up an impressive two wins and a draw. NYC FC look a more stable team, particularly from a defensive perspective, without Pirlo. 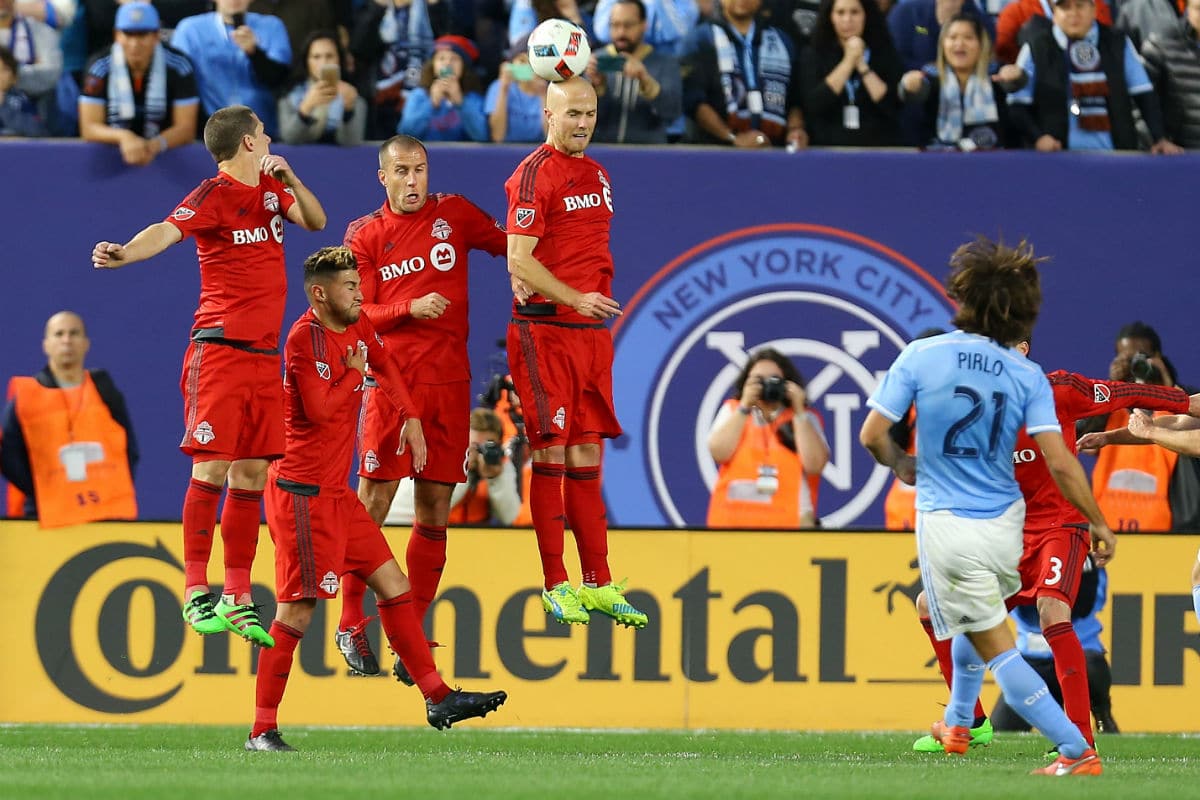 Yangel Herrera came into the side and gave Vieira what he was looking for. “I know what I can get from Yangel and I know what I can get from Andrea regarding the game, and that’s the reason why I made the change,” he said following the 3-2 win over Columbus. “The next game we’ll have to look at it again and make a decision. This time it’s Andrea, maybe in another game it will be someone else.”

“When you want to be a little more solid defensively, that’s why I chose Yangel. When we have a time when we’re going to have more possession, where we want players to create and build from the back, I would go with Andrea. I would want maybe to go with Maxi, Yangel and Tommy [McNamara].”

Indeed, Pirlo returned to the starting lineup for Wednesday night's defeat to Real Salt Lake with Herrera unavailable due to his international responsibilities. The Italian had a point to prove with some questioning whether his career is now on the wind down. He was one of the best players on the pitch. But with NYC FC losing his case was somewhat dulled.

There’s a case to be made that New York City FC have moved on without Pirlo. Vieira had two objectives heading into thew 2017 season, one of which was to make his squad younger. He did that by allowing Frank Lampard to leave the club, bringing in a number of young players to add more exuberance to his side. The other was to make NYC FC more defensively solid. That’s where Pirlo may no longer have a place. 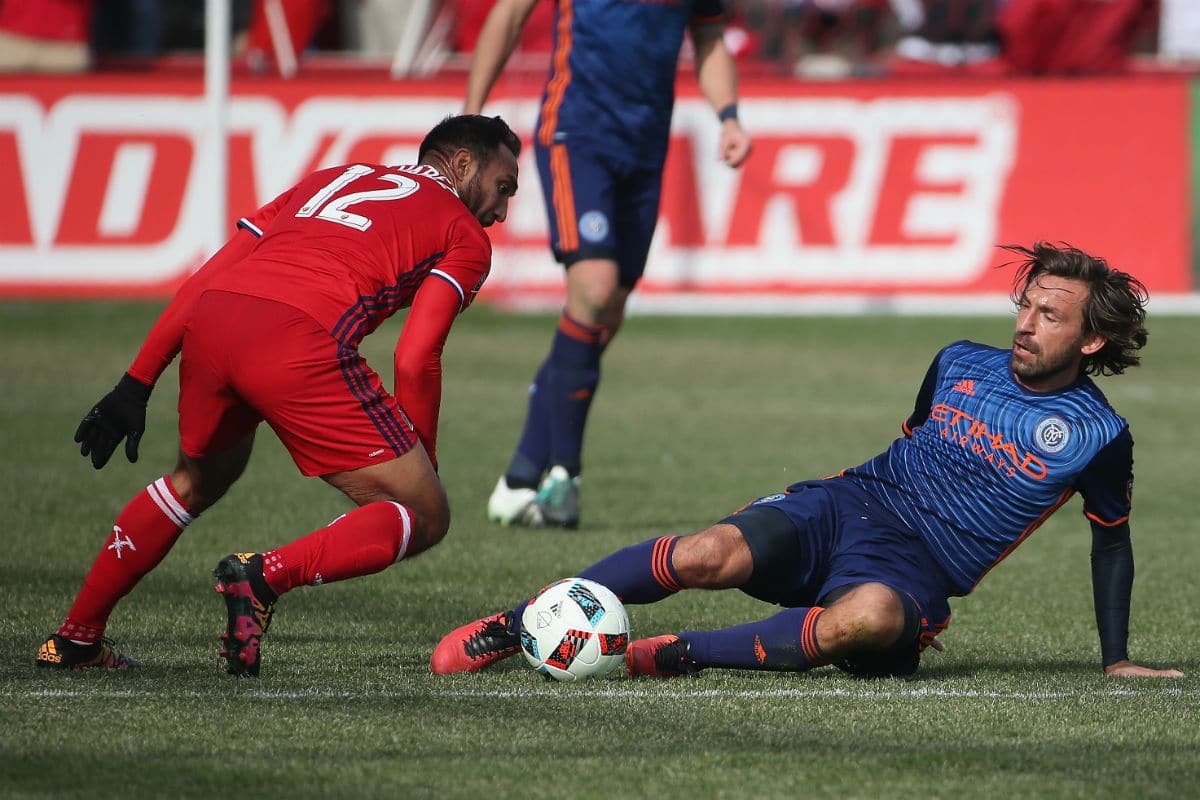 Read more: WHAT SHOULD NEW YORK CITY FC DO NOW THAT FRANK LAMPARD HAS LEFT?

The image of Pirlo standing, hand against the post from a corner kick as the opposing side scored, went viral in the Italian’s first season in MLS, with the internet laughing at his sheer levels of languidness. For all that the picture was undeniably amusing, it also illustrated Pirlo’s attitude towards defending.

It’s not a job for him. It’s never been a job for him and that shouldn’t be held against him. Pirlo is the pass-master, the man charged with getting people in rather than keeping people out. But in NYC FC’s three-man midfield, playing Pirlo comes with too many consequences for the back four. His passing ability isn’t enough to get him by as he edges closer to his 40th birthday.

New signing Maxi Morales has enjoyed a profound impact at the club since arriving at Yankee Stadium ahead of the 2017 season. But as an inherently adventurous and attacking player with two goals and three assists to his name from just ten appearances, he leaves space in behind for opposition sides to exploit. But his creativity is key to the way Vieira wants his team to play.

Alexander Ring is another who joined the Bronx club in the off-season. The Finnish midfielder has made NYC FC tougher to break down and averages more tackles per game than any of his teammates. And so with Ring the defensive anchor and Morales the playmaker, there is only one free spot in the centre of the NYC FC midfield. 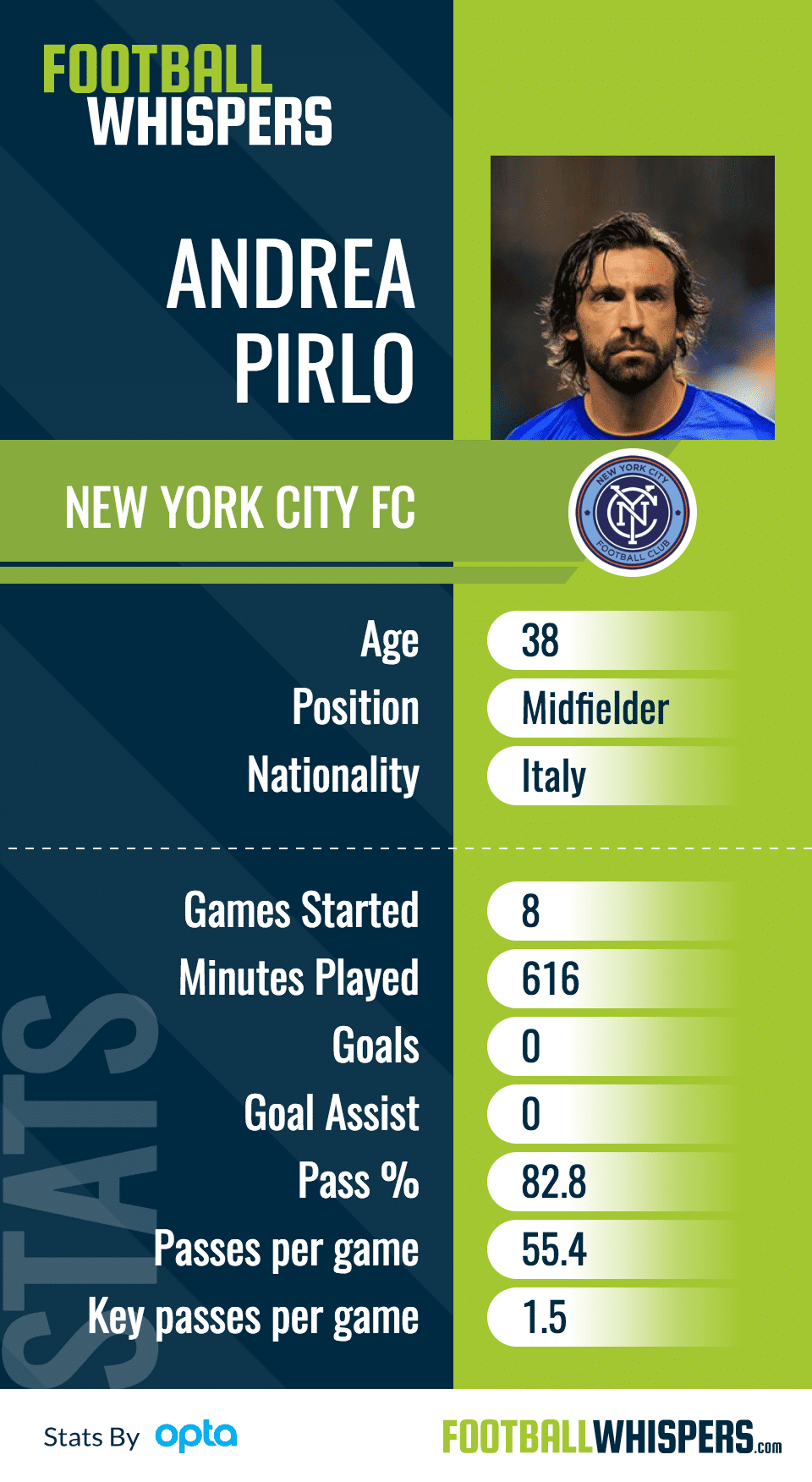 In Pirlo and Herrera, Vieira has two very different options to choose from to fill that spot. The former is one to exercise control while the latter gives NYC FC more mobility and provides a sturdier platform. In an effort to establish some consistency, Vieira has opted for the latter of late.

Of course, at 37 it’s possible that all this is just a consequence of the natural effect of ageing. MLS is a strenuous league and so Pirlo might be finding it tougher to compete physically, particularly in the middle of the pitch where things tend to get most physical.

Pirlo was an outstanding signing for NYC FC to make as an expansion club but it is a mark of their progress that they may have moved past him.