While it may have taken longer than expected for Leicester City to break Sunderland’s resolve on Tuesday night, the Foxes eventually secured a fifth consecutive league victory at the King Power Stadium.

The win ensured that Craig Shakespeare’s record in management remains without flaw, with the Premier League champions seemingly unrecognisable from a matter of months ago. It also ensured that the club took their place in the top half of the table for the first time since August, with the former assistant manager understandably taking his fair share of the credit.

Yet, at the same time his role in Leicester’s revival has been downplayed, by Shakespeare himself even, amid claims that the team has merely reverted to what made them so successful under his predecessor. Indeed, if it were really that simple then surely Claudio Ranieri would have done the same?

However, there was one glaringly obvious difference from the Leicester of last season to the one that so underwhelmed under the Italian this time around. There was, after all, no N’Golo Kanté and consequently no driving force or ball-winner to make the Foxes' quick transitions possible. The Frenchman was and has continued to be such a revelation due to the fact that he not only excels individually but brings the best out of those around him, affording them the freedom to play their natural game.

Without Kanté alongside him Danny Drinkwater was unable to find the space to pick the passes that so often found Jamie Vardy in the channels, instead having to take on more defensive responsibility himself. Leicester needed a player that could at least come close to replicating their former pocket rocket’s energy and tenacity in the middle ground.

The fans will now no doubt have wished they’d identified that man as Wilfred Ndidi in the summer rather than after the transfer window had shut. The scouting team at the club again deserve credit for doing their research, which does take time after all, but as it was the Nigerian arrived at an unenviable time with an even more unenviable task.

He would need to have an immediate impact to help Leicester revert to type, but it was clear by then that the situation behind the scenes had come too far to accept anything but the inevitable demise of Ranieri. Now with those around him enjoying a new lease of life (rightly or wrongly) and having had time to adjust to the league — the jump from Belgium to England is stark — Ndidi is proving just how shrewd an acquisition he was.

There’s no secret behind Leicester’s utilisation of statistics in their player search and in that sense Ndidi’s identification was something of a no-brainer, even if he was far from a household name. The midfielder had averaged a frankly remarkable 7 tackles and 4.8 interceptions per game over six Europa League group stage appearances for Genk to lead the way in both categories.

The drop off in the Foxes intensity off the ball was clear to see, having fallen from the second most tackles per game in their title winning campaign (22.9) to 13th prior to Ndidi’s arrival. They may not be back at the same level as last season just yet, but their tackles per game figure has risen from 16.5 per game without the January signing to 18.1 with him, which is enough to rank sixth in that time. 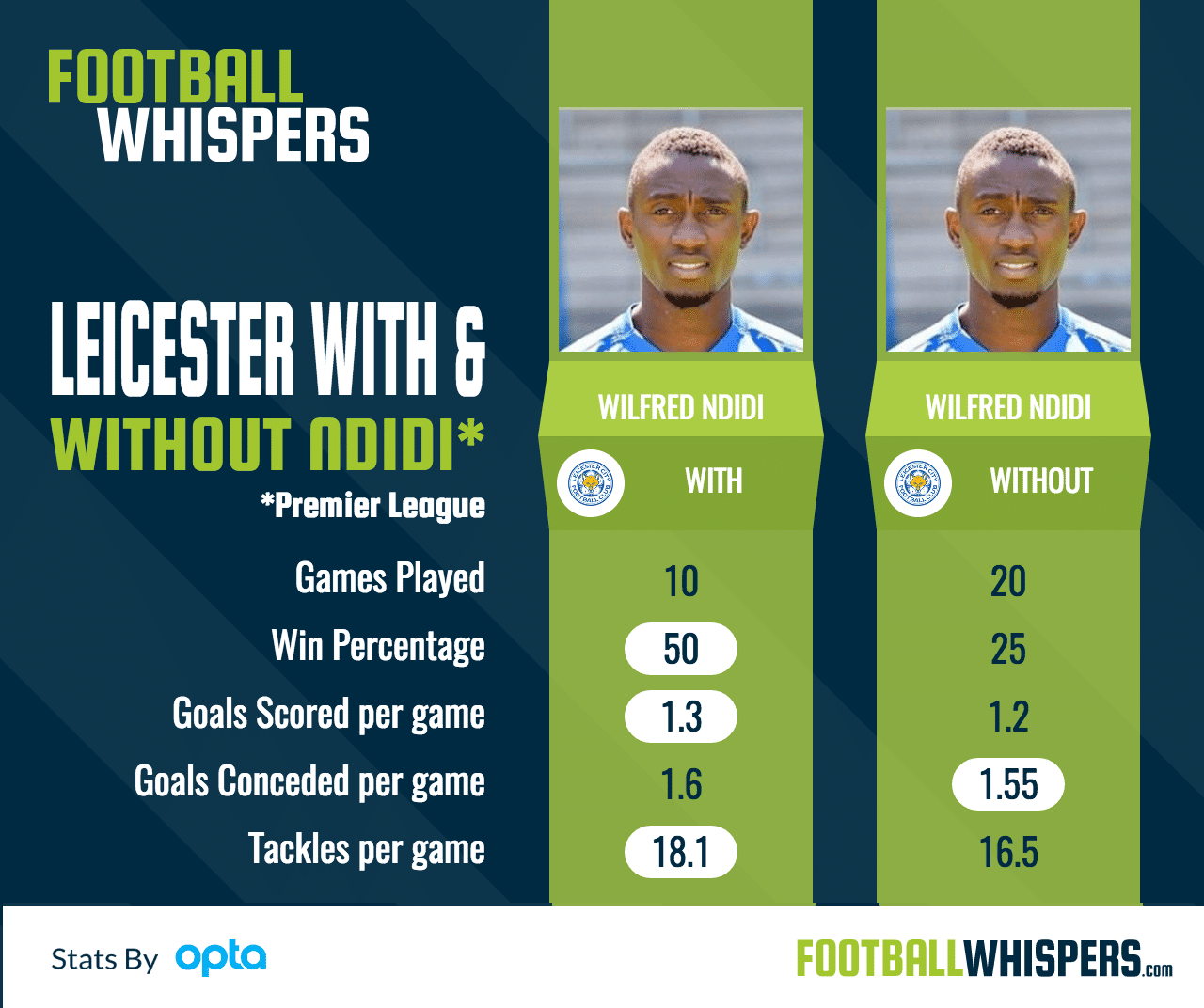 Ndidi has been almost solely responsible for that rise, with an average of 4.2 tackles per game well ahead of his new teammates — Danny Drinkwater is second on 3 — and not far short of the 4.7 Kanté averaged in the previous campaign. Nevertheless, to suggest that the former Leicester man and his heir-apparent are comparable across the board would be wayward. There are areas that Ndidi cannot match the Chelsea man but also a number of areas in which he actually surpasses what Kanté can offer.

His composure in possession isn’t of the same level, with a pass accuracy of 73.2% perhaps most clearly in need of work, but the most obvious upgrade on Kanté’s output is his ability to win duels in the air as well as on the ground. Leicester’s diminutive former destroyer was never going to be able to compete with far taller players in that regard, although he certainly doesn’t shirk an aerial duel like someone of his height would. Ndidi, who stands at 6’2” by comparison, has unsurprisingly won four times as many aerial duels per game (4).

He also has the ability to net the sort of screamer that opened the scoring against Stoke, having proven as much against Derby in the FA Cup and on numerous occasions for Genk. He’s far more willing to chance his arm than Kanté, who can’t pack the same power into his efforts at goal.

There is of course another clear gap between the two, and it’s a pertinent one that in all the comparisons of their skills on the pitch has been somewhat overlooked. Kanté, now 26, was a late bloomer while Ndidi is just 20. It’s a fact that many may not realise, but there have only been five players to have scored this season that are younger than the Nigeria international.

It brings the enormity of his potential into focus and while Ndidi may not be the like-for-like replacement for Kanté that many suggested, he’s certainly enabling the fans to forget about their former favourite. Ndidi is the future after all and they will need to cherish him while they can.