A disappointing hangover season after a Premier League title win is nothing new for Chelsea, and it once again highlighted Eden Hazard’s role within the team.

Over the past year the Belgian has been accused of going missing in games, failing to use his talent to its full effect for the entire 90 minutes.

Yet the vicious circle of a team’s performances being tied to those of its star man make it difficult separate how much the Belgian is at fault and how much is his team’s.

As investigated by an episode of Three Minute Myths earlier in the season, Hazard’s production has been consistent in both 2016/17 and 2017/18.

To update the stats from the video, Hazard’s expected goal contribution is actually higher this season than last. His xG90 has increased to 0.25 from 0.21 and his xG90 assisted is now 0.29 compared to 0.22 during the title-winning campaign.

Despite having started matches in slightly different positions to 2016/17, his output – what he actually does – is extraordinarily similar stylistically.

This is interesting in itself – it suggests that Hazard has gravitated towards the same parts of the pitch regardless of what position the team-sheet says he’s playing.

Our Persona models also shows the Chelsea No.10 has been performing a similar role throughout the stuttering 2017/18 season. This is despite being shifted from his usual position, wide left, to a striker or a more central attacking midfielder.

However, between the two halves of the season, something interesting happened.

Despite Hazard producing a similar Persona radar, he started becoming the focal point of Chelsea’s attack to a much greater extent.

After the New Year, this shot up. Driven mainly by an increase in his xG assisted, he was contributing nearly 43 per cent of Chelsea’s xG90 from January onwards.

Because of this increase in xG assisted – it almost doubled – Hazard’s personal emphasis also changed. 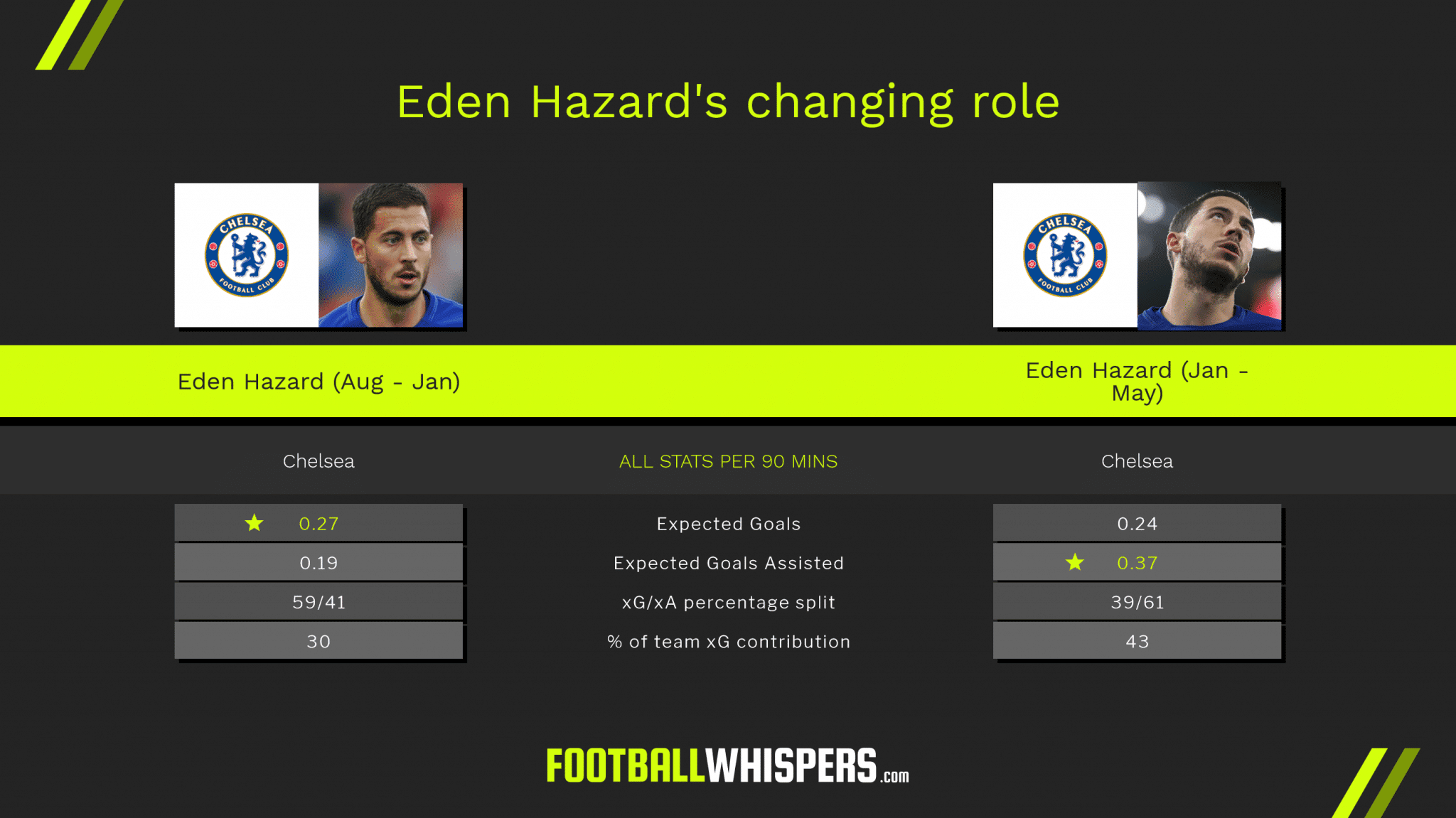 This change didn’t appear to help Chelsea, whose first half of the year was better than their second.

The Blues had a tremendous run of form – both in terms of results and the underlying statistics – that narrowly overlapped with the turn of the year, ending with the draw against Arsenal in early January.

Antonio Conte’s men never really matched that for the rest of the campaign, and it means that the split between 2017 (plus the Arsenal clash on January 3) saw them pick up 2.09 points per game with an xG difference per match of plus 0.7.

From there until the end of the season, their points per game rate was down to just 1.5 and xG difference per match was a narrowly above water, plus 0.21.

Too much on Eden a Hazard?

Forty-three per cent of a team’s xG output is an awful lot for one single player to be contributing. It plays into the perception that an opposing side only needs to stop Hazard in order to stop Chelsea.

While this doesn’t seem like a healthy position for a club to be in, perhaps it is just a symbol of Hazard’s quality. Lionel Messi’s xG+xA90 of 1.04 is 48 percent of Barcelona’s 2.16 xG90. Cristiano Ronaldo’s share for Real Madrid is an amazing 54 percent.

The difference with those teams are they have an array of other attacking talents who consistently produce the goods, which doesn’t seem to be the case at Chelsea.

With the Blues seemingly not entirely convinced with either of their primary centre-forward options in Olivier Giroud and Álvaro Morata, it would be no surprise to see Chelsea spend big money on elite attackers this summer to lessen the load on Hazard.