It may have only been a Carabao Cup tie but Harvey Elliott did more than enough to justify the hype. The 16-year-old made the switch to Liverpool from Fulham in the summer and arrived on Merseyside with a bit of a reputation.

Many youngsters have made the move and a handful of those have been tipped as the next big thing. But the majority are then crushed under the weight of expectation before they’ve even kicked a ball for the Reds.

Elliott is different, though.

He has a natural confidence that translates to his performances on the pitch. He was part of a youthful Liverpool side that faced MK Dons on Wednesday night but along with fellow teenager Curtis Jones, Elliott outshone the seasoned pros on display.

Even Joe Gomez was a little out of sorts in what was his first start since the opening fixture of the Premier League campaign. James Milner finished with a goal and an assist from his position at left-back and his performance, as expected, could best be described as effectively functional.

The match was, however, an opportunity for the youngsters to catch the eye.

It’s no easy feat. Coming into an untried and untested XI is something the very best struggle to adapt to. There’s no rhythm and there are no patterns of play. If you aren’t careful, the game can pass you by in an instant. And instead of playing your natural game, you look to avoid making mistakes.

The 16-year-old was reportedly courted by Real Madrid and Barcelona in the summer while Spurs had an interest in the midfield maestro. But as a boyhood fan, there was only ever going to be one winner when Liverpool entered the conversation. 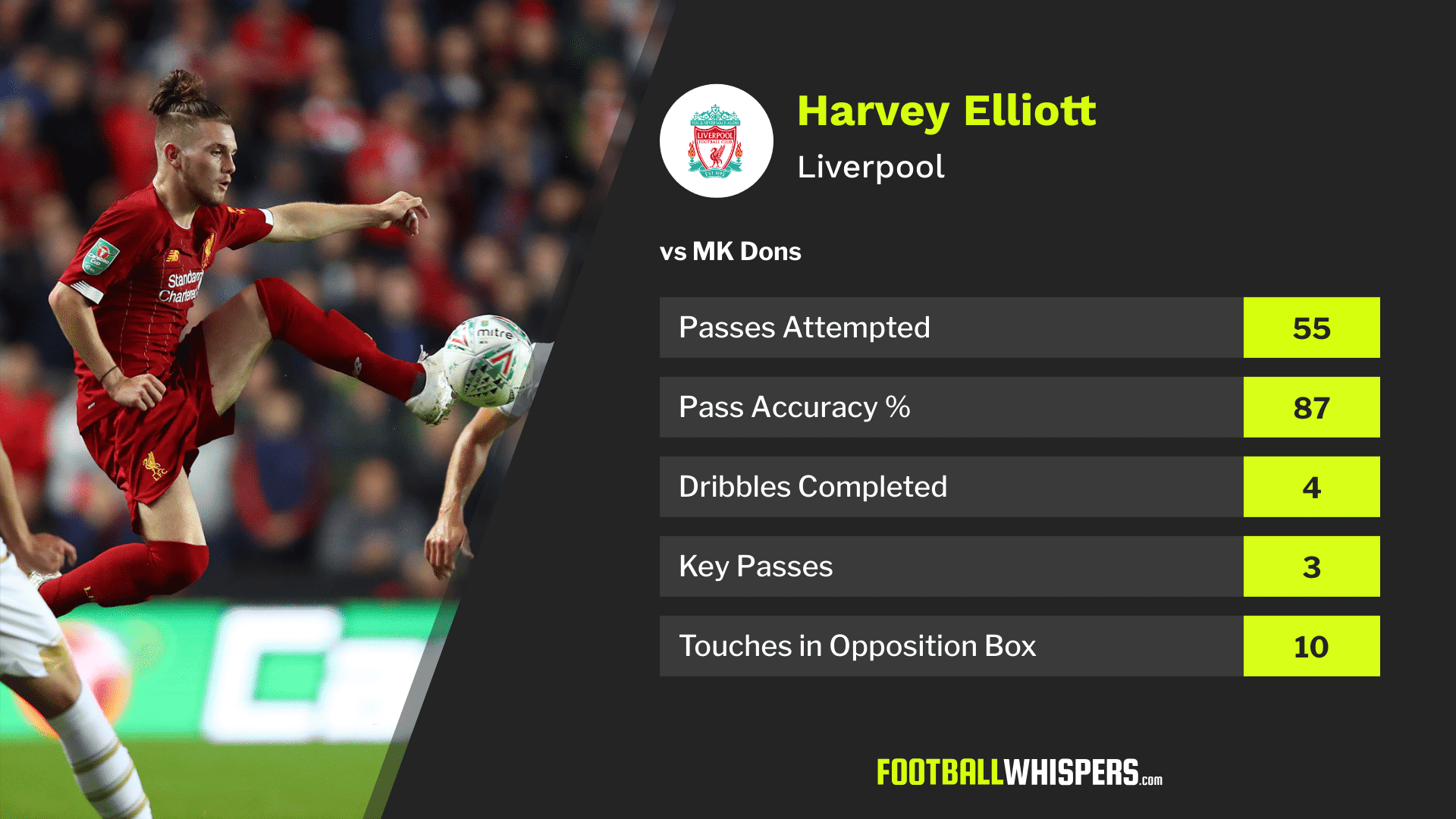 In his first start for the Reds, Elliott looked at home playing for the champions of Europe. Jones received the man-of-the-match award but the No.67 was a close second.

Starting on the right side of the attack, the teenager linked well with Oxlade-Chamberlain and was the most creative player on the pitch. His three key passes couldn't be bettered and his pass accuracy was close to 90 per cent. That highlights Elliot's talent and use of the ball given the majority of his passes were probing, risky ones. He also completed four of the five dribbles he attempted.

The youngster finished the game with ten touches in the penalty area, an extraordinary amount. For context, Mohamed Salah usually averages around the nine mark while Sadio Mané comes in at seven.

He was unfortunate not to score, with two efforts striking the woodwork, and on another day he comes away with an assist after picking out Milner with a perfectly weighted pass.

Jürgen Klopp was happy with the teen's performance, too, praising him in the post-match press conference. “Sixteen years old still and this kind of footballer, it is good for us. He is a brilliant boy, takes the situation really well, wants to learn and he will always be a special player in moments but his overall game is really, really good.”

Assistant coach Pep Lijnders also spoke positively about Elliott in the build-up to the Carabao Cup tie: “Some players, they play as if they already, say, 28 or 29, he’s a player who sees so much around him before things happen. He is a talented boy. I don’t want to put him under more pressure, but we’re really happy he is with us.”

That is what makes Elliott such a special talent. When teenagers burst onto the scene they're usually explosively quick or they're a physical specimen and this is what allows them to compete at a higher level from a young age.

But the Liverpool wonderkid, he's different.

He's tiny and though he's no slouch he's not a player who is going to leave full-backs in his wake. His talent is his speed of thought and his quick feet. It gives him an advantage as he's not relying on skills the opposition can nullify.

For example, a quick full-back can smother a quick wide forward. A powerhouse midfielder can bulldoze a physical attacker. In academy football, they can get by on these talents but at the top level, they can't.

But for Elliott's skill set, there's no obvious equaliser. His close control allows him to salmon his way out of tricky situations. Stand off him and he can thread passes into feet and loft them over the opposition when it doesn't seem possible.

He cut it in the Carabao Cup against MK Dons. It'll be interesting to see how he does if he's given an opportunity alongside the regular Liverpool attack. It could be fun to watch. If the Reds nurture him properly, they'll have a genuine talent on their hands.