Manchester United aren’t having the best of transfer windows. They’ve identified targets but clubs are seemingly reluctant to negotiate.

The Red Devils had to part with £50million to secure the signing of Aaron Wan-Bissaka, and despite reportedly being in talks with Sporting over Bruno Fernandes for well over a month, the fee to sign the Portuguese midfielder remains at £60million.

A top target for Ole Gunnar Solskjær, the fee to sign the England international from Leicester City appears to be increasing by the day. It is now being reported it will take a world-record bid for a defender to convince the Foxes to part with their powerhouse centre-back.

United only turned their attention to the former Sheffield United man after being priced out of a move for Kalidou Koulibaly. However, with Maguire now expected to cost in excess of £80million, perhaps the Red Devils should be looking at alternatives.

Of course, Maguire’s Premier League experience works in his favour but it also adds a premium to his value. If United looked abroad they could find a defender who does what the Leicester No.15 does but at a fraction of the price.

Using the Football Whispers' exclusive data-lab, we’re able to find players who compare not just stylistically to Maguire but statistically as well. Here, we look at three potential alternatives.

RB Leipzig have a number of centre-backs who are regularly linked with moves away. Perhaps the biggest name is Dayot Upamecano. The 21-year-old Frenchman has been linked with Barcelona, Manchester City and United in the past but it's his team-mate, Orban, who might actually be the better fit for the Red Devils right now. 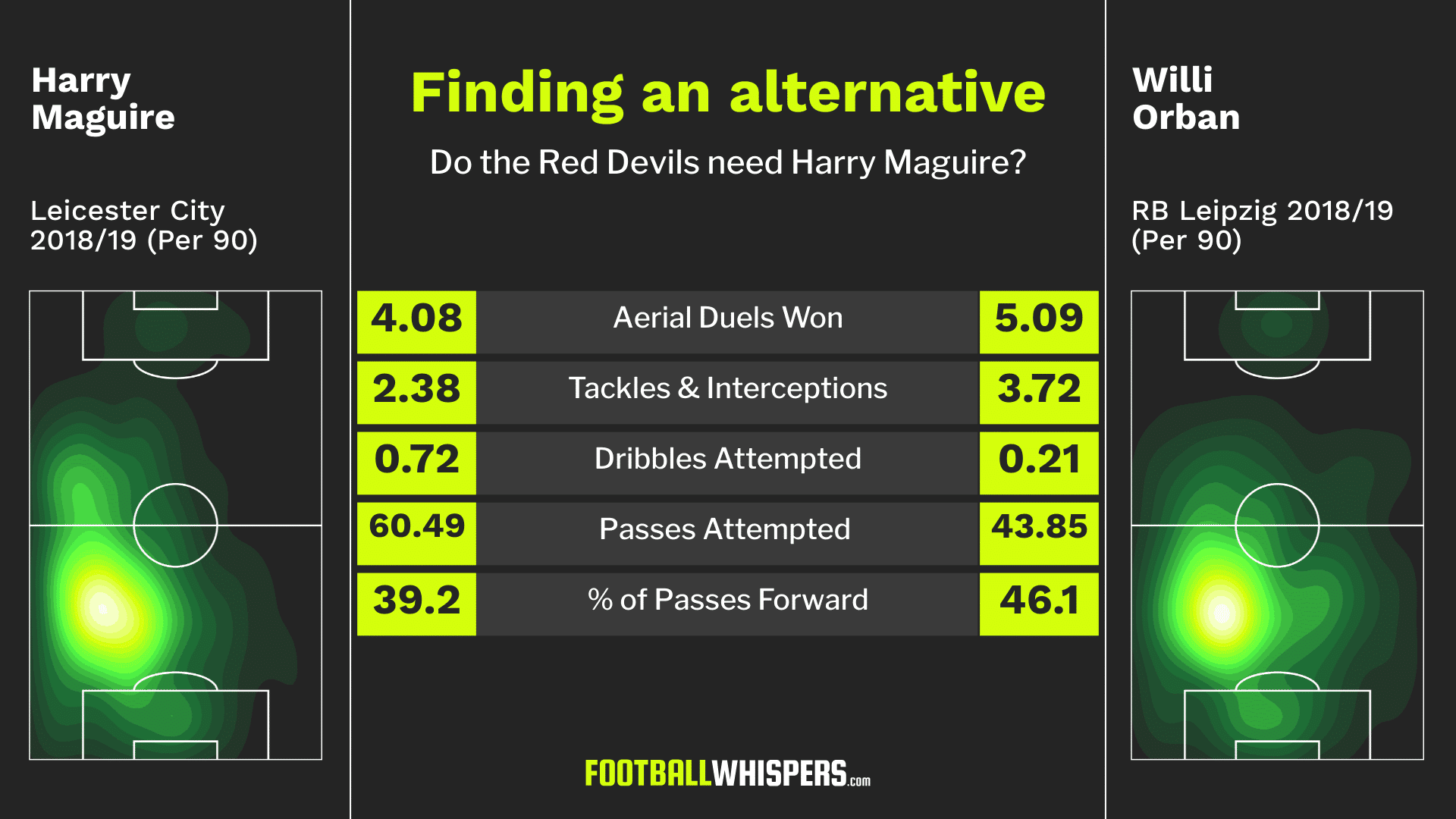 One of the few constants in this RB Leipzig side over recent seasons, the 26-year-old doesn't come across as anything special. But that is down to his quality. Orban makes everything look easy. He does the simple parts well and there's very rarely any heart in the mouth moments when he's involved.

A dominant, no-nonsense defender, he lacks Maguire's flair, averaging fewer dribbles, but that isn't necessarily a huge problem. He's aggressive in the air; competing for and winning more aerial duels per 90. Orban is busier, involving himself in more tackles and interceptions, but he doesn't see as much of the ball as Maguire.

But this is down to the style of the team. Leicester play football whereas the Bundesliga outfit like to hit sides on the break. It means their players don't see as much of the ball.

One thing to take from these stats is the fact Orban is just as progressive as Maguire.

He might not dribble as often but he's incisive with his passes, playing close to 50 per cent of them forward. Being used to this sort of style may see him better suited to playing the way Solskjær wants his team to.

The wildcard on the list. Kempf made the move to VfB Stuttgart last summer on a free transfer. The club had a season to forget and it culminated in defeat in the relegation play-off.

Yet there's something about the 24-year-old that makes you think there's a rough diamond there just waiting to be polished.

Only Orban won more aerial duels last season than Kempf last season in the Bundesliga. He's a proactive, confident defender who reads the game well, averaging 2.11 interceptions per 90 and five possession regains in the defensive and middle thirds.

He averaged 45 passes on a per 90 basis and played 42 per cent of them forward. Kempf also averaged 0.4 dribbles. He's not Maguire levels but he's a bit more expressive than Orban.

Arguably his biggest selling point is his vision. At times he can act as a quarterback, pinging passes out from deep areas into the attacking players. He's fairly accurate, too, completing 55 per cent of his long passes.

He isn't a star name and he's not likely a signing who would excite fans, but he's a functional fit and he improves the side. United need that sort of reliability right now.

Upamecano's injury woes during the 2018/19 season opened the door for Konaté. The 20-year-old Frenchman joined the German club in June 2017 from Sochaux. He was used sporadically during his debut season with the club, appearing in 1,227 minutes in the German top flight.

Despite this, he managed to impress enough to get the nod for RB Leipzig in the heart of the defence when Upamecano wasn’t available.

He didn’t look out of place in what turned out to be the Bundesliga’s sternest defence.

Standing at 6ft 4ins, he’s physically imposing and incredibly dominant, both in the air and on the ground. He wins over 3.5 aerial duels and regains possession on seven occasions per 90.

He’s also obnoxiously calm, whether that be when faced by one of the most potent strikers in Europe in Robert Lewandowski or simply looking to take the ball out from the defensive third.