Harry Maguire has come a long day from his time at Sheffield United. From helping Hull City jump from the Championship to the Premier League, he then earned a move to Leicester City.

His reputation has grown after stellar performances against some of the best teams in the division, showing a tough tackling mean streak, but composure and style while in possession.

Now an England international with three caps, his stock continues to rise and our unique performance index ranks him as the 77th best player in the league this season, a few places above Phil Jones at Manchester United.

Before finally opting to join the Foxes in the summer, he reportedly held talks with Tottenham and was on Liverpool’s radar too, now, according to The Mirror, both Manchester City and United are preparing to bid for the 24-year-old in the summer.

“There were a number of clubs interested,” said Maguire. “But when I met the manager here, he pretty much swayed it into the direction of this club. Leicester are on the up and it looks very promising for the future.

“It’s obviously a very exciting time for myself. Once I had my eyes on this club, I always wanted to join. Thankfully I’m here so I can’t wait to kick on.”

The centre-back has certainly done just that, playing 26 times in the league for the former champions and providing Claude Puel with a imposing brick wall in front of Kasper Schmeichel. Although the Sheffield-born defender has popped up with two goals and provided four assists this season. 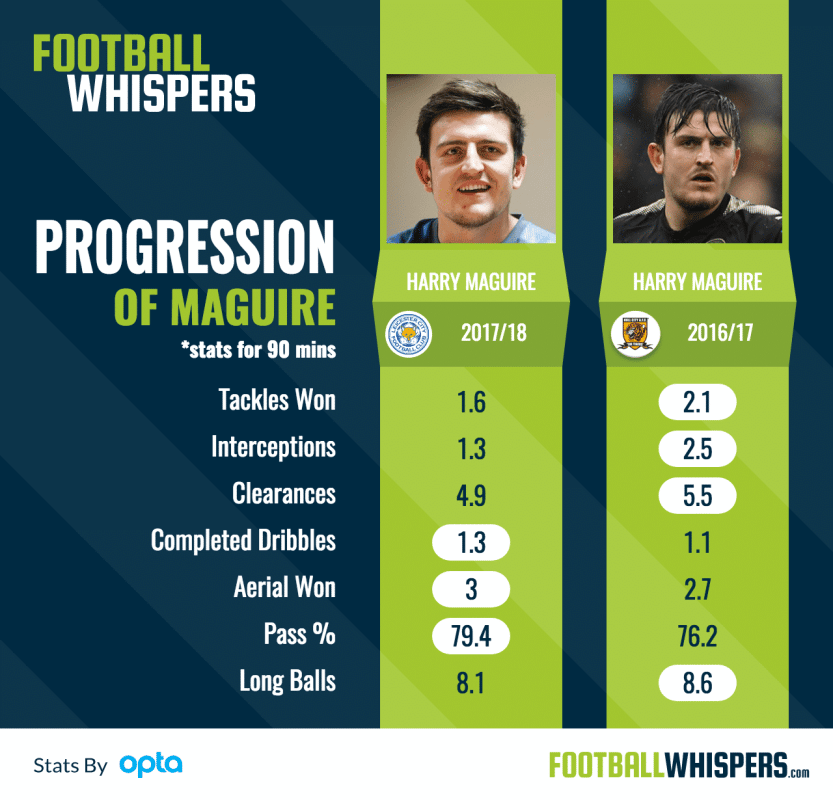 No surprise to see he’s made fewer tackles, interceptions and clearances this term, but the Tigers were bombarded most weeks and Maguire had to be up to the challenge.

Where he has increased his numbers is on the ball: he’s making more of his passes and is more successful bringing the ball out from the back.

With the signing of Aymeric Laporte, Pep Guardiola might not have another centre-back on the top of his wanted list, with John Stones and Nicolas Otamendi, plus Vincent Kompany all in the squad, however, Manchester United could benefit greatly from a ball-playing defender to patrol in front of David de Gea.

Leicester believe Maguire has tripled his value since joining for £17million in the summer, and if City’s new French defender is worth similar, with new France caps to his name, it’s hard to argue a case against the Englishman’s price-tag.