Just, for a moment, suspend belief. Pretend football doesn't operate in a bubble; that clubs don't trade players like commodities. Imagine a world in which they operate just like the majority of businesses, that hires have to be made, roles filled.

How would that go? Well, let's use Tottenham Hotspur as an example. They have a problem position, second-choice striker. Previous incumbents of the role haven't worked out. Roberto Soldado and Vincent Janssen failed and Fernando Llorente is serving a rather lengthy notice period.

So it's time for Spurs to advertise…

Tottenham Hotspur are one of the leading clubs in the Premier League. Our new spacious new London office has just opened – to rave reviews – and we're looking to expand our frontline with an exciting and ambitious striker. We have a young, vibrant team who all report to our Argentine manager, who has been with the company since 2014. See below for job specification.

It isn't exactly enticing, is it? In the business world, the nine-to-five grind, few would be keen on the job, even if a large salary was offered. And even in the warped reality that is top-level football, Spurs will find it difficult to find a quality back-up for their No.9.

It is, however, not impossible and we have identified five realistic candidates that could be the ideal deputy for Harry Kane.

Tottenham have always favoured an out-and-out striker when searching for an alternative to Kane. Yet it would be wise to sign a frontman who is also capable of functioning out wide. Pléa ticks that particular box.

The French international joined Borussia Mönchengladbach last summer and started off being used through the middle. Pléa's impact was immediate and he struck four goals in his first six Bundesliga games and netted a hat-trick in the DFB-Pokal win over lowly BSC Hastedt.

He has predominantly been used out wide since, however with Lars Stindl occupying the central role. His goal output has dropped as a result while Gladbach's wretched form in 2019 has also affected the 26-year-old.

His return of 14 goals and three assists in all competitions is encouraging, though. As is the fact that stylistically he is similar to Kane, as the Football Whispers Player Persona tool highlights below.

The big stumbling block were Spurs to move for Pléa would be the price tag on his head – Gladbach rejected an offer worth €50million for the forward in January from Chinese Super League side Dalian Yifang.

At the time, the club's sporting director, Max Eberl, stated it was because the club didn't want to jeopardize their push for the Champions League. Gladbach are not out of the race but if they fail to secure their spot at Europe's top table for next season they may be willing to cash in on the Frenchman.

The Celta Vigo striker has been linked with a move to the Premier League for some time. West Ham United have supposedly been long-term admirers while Spurs' interest was reported this week.

Maxi Gómez, who arrived in Spain in the summer of 2017 from his native Uruguay, and proven a reliable goalscorer. He scored 17 times in his first La Liga campaign and has netted eleven times this term despite the Galicians struggles – they sit just one point above the drop zone with six games to play.

The 22-year-old is a strong presence up front, one who can hold the ball up and link play but can also find the net from difficult positions and is very dangerous in the air. 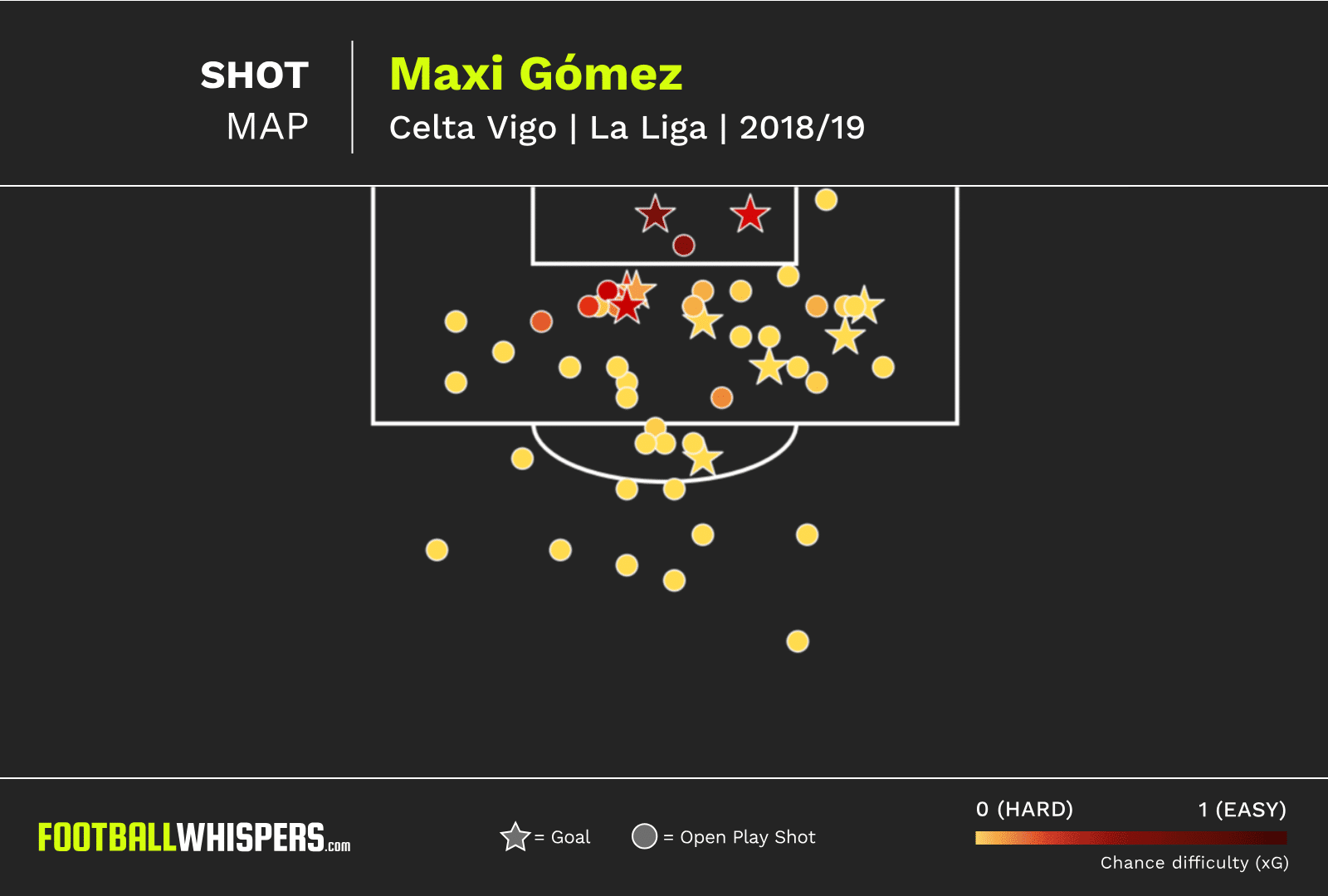 In this respect, Gómez is a different option to Kane. A battering ram as opposed to a polished top-level striker. And that could be attractive to Mauricio Pochettino, who was instrumental in the signing of Llorente.

Gómez could prove an affordable option, too. He has a buyout clause of £43million but if Celta are relegated the club will likely attempt to raise funds through player sales.

Club icon and talisman Iago Aspas is their biggest asset but he has signed a new contract until 2023. Gómez then is their cash cow and a fee of £30million could be enough to bring him to north London.

There has been plenty of attention on Eintracht Frankfurt's attack this season. Much of it has been on Luka Jović, the 21-year-old striker who is being courted by several of Europe's biggest sides, including Real Madrid, Barcelona and Chelsea.

But Haller deserves plenty of recognition, too. He isn't as prolific as the Serbia international but has bagged 13 goals in all competitions and has been the perfect foil Jović.

At 6ft 3ins, the 23-year-old is an imposing presence but combines that with excellent technique and great subtly, which is why he has claimed seven assists this term. He is also capable of the spectacular, as the below video showcases.

Haller was linked with Tottenham earlier in the campaign in the German press and a potential fee of around £26million was mooted.

That figure is likely to have increased over the course of the season and, if Jović is sold for big money, Eintracht would be loathed to lose another key member of their attack, especially if they have qualified for the Champions League.

The Mali international's career is a story of perseverance. He spent his formative years in the game playing in the lower echelons of French football – at the age of 21 years old, he had never played higher than the sixth tier.

His big break in European football came, however, when he joined Marítimo in January 2015. He made the step up to top-flight football appear easy and struck eight goals in 16 matches. He followed that up with seven in 18 games during the first half of the 2015/16 season before he signed with Porto in January 2016.

Marega has gone from strength to strength since and has proven himself a consistent top-level goalscorer during his two seasons in the Porto first team. He has netted 18 times this term and, most impressively, a third of those have come in the Champions League. 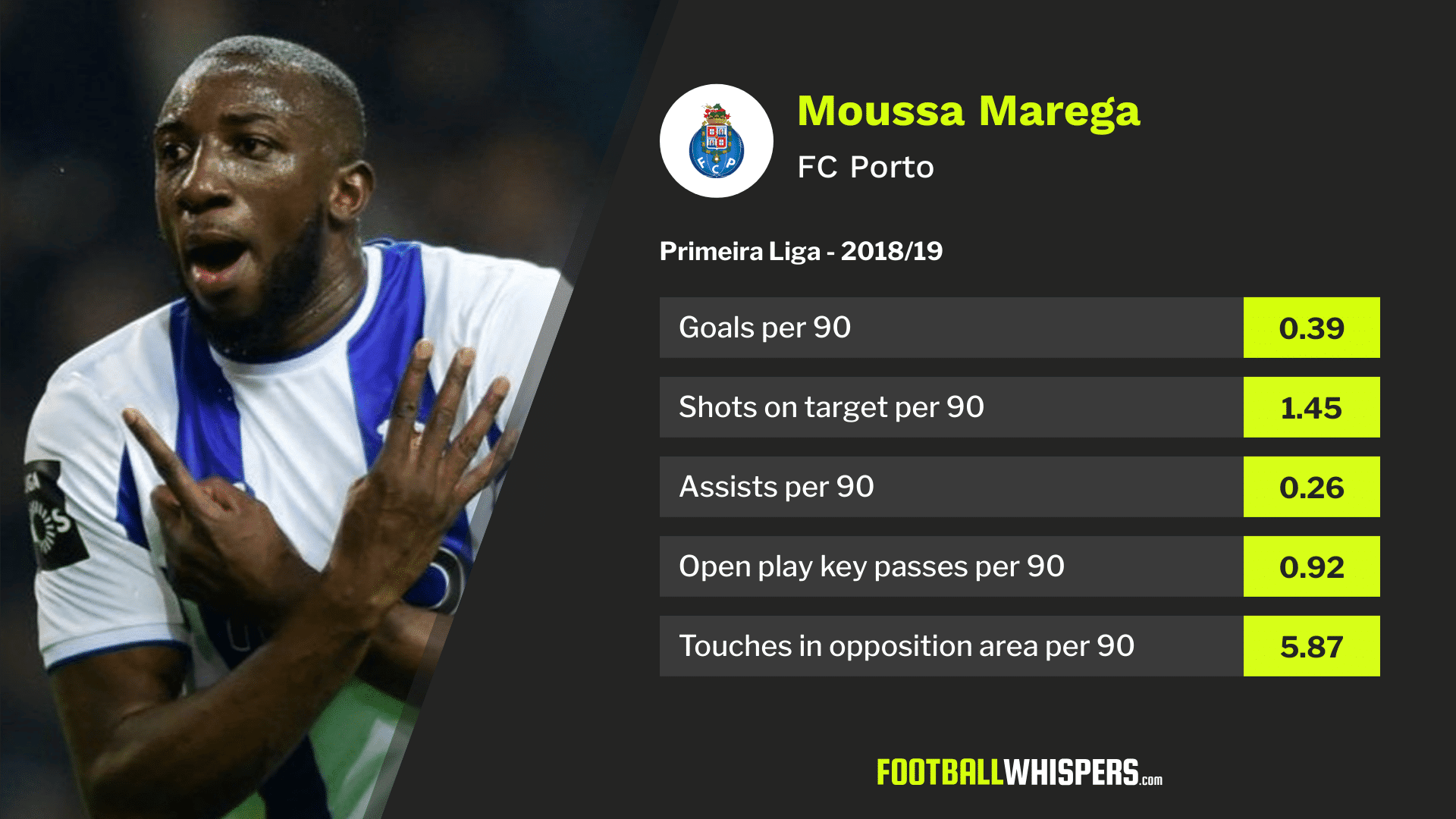 Nicknamed ‘The Terminator', Marega is a powerful, quick and, most importantly, smart runner. He knows how to exploit space behind defences but is also an adept finisher in the penalty area. He is a creative presence, too, with eleven assists in all competitions.

It's this ability to fashion chances as well as take them that would appeal to Tottenham and Pochettino. Marega could be utilised out wide when Kane is fit and then moved centrally when the England captain requires a break or is injured.

The 28-year-old has a £34million buyout clause in his contract, which wouldn't put off Spurs, who have previously been linked with the forward.

Undoubtedly the most left-field selection on this list yet one with plenty of logic behind it. This summer the Belgium international will turn 32 years old and Napoli are, according to reports, willing to allow Mertens to depart.

That is partly because his contract expires in the summer of 2020. The Serie A side haven't engaged in talks to extend the forward's deal and would rather receive a fee at the end of the current campaign than lose him for nothing in a little over 12 months time.

Under Maurizio Sarri, Mertens blossomed into one of the most fearsome forwards in Europe. He struck 66 goals in two seasons and was linked with the likes of Real Madrid and Barcelona.

This term he hasn't been as consistent, nor has he been as important. Carlo Ancelotti has preferred to use Arkadiusz Milik as his first-choice No.9 and Mertens has started 19 Serie A games.

He has, though, netted 14 goals and claimed 12 assists. So his impact when on the pitch is clear. His ability to play out wide is also an additional bonus, one which Pochettino could take advantage of.

While Mertens wouldn't be a long-term solution to Spurs' second-choice striker conundrum, he certainly would add quality to the club's attacking options. For the right price, he would be a shrewd acquisition.