Tottenham Hotspur find themselves in a tricky situation heading into their Champions League final clash against Liverpool.

The return of talisman Harry Kane is a positive. The Spurs captain has been missing since he limped off during the quarter-final victory over Manchester City in April.

Heung-min Son, Lucas Moura and Fernando Llorente all filled in for Kane and the trio all played a part in Spurs reaching their first European Cup final.

All three could make an argument to start in Madrid but with the No.10's return, two of them could well have to settle for a place on the bench.

It may seem harsh but it was expected. Kane is the main man for Pochettino's team. When he's fit, he plays. Usually, it'd be a no brainer. But with this being a final and the outcome potentially having severe repercussions for a number of people linked with Spurs, should the Argentine tactician take a step back and look at the bigger picture?

We've seen it before. Players have been rushed back from injuries and they've not been anywhere near fully fit despite their claims. They've not been at their best and the team have suffered because of it.

Kane may believe he's ready but the chance to play in a Champions League final would make you ignore the odd twinge or ache.

Kane himself isn't ever at his sharpest after returning from injury. He's always a bit rusty and he fails to hit his averages.

The graphic above shows how Kane has performed in the two games following on from his last two injuries. The stats for April 2018 are after he returned from 20 days out with an ankle injury. The February 2019 numbers are after he was back in Pochettino's starting XI after missing 40 days with a torn ankle ligament.

In isolation, these stats don't look back. He's averaging a healthy amount of shots, he's getting touches inside the penalty area and he's getting more than 30 per cent of his shots on target.

His expected goals numbers are around the 0.3 mark, an average plenty of forwards would be happy with.

But when you compare these numbers to his averages over a two-season period, it becomes apparent that there is quite a clear drop-off in some metrics. For example, he doesn't get close to his 4.67 shots per 90. He doesn't get anywhere near the 6.28 touches he averages in the opposition's box either. 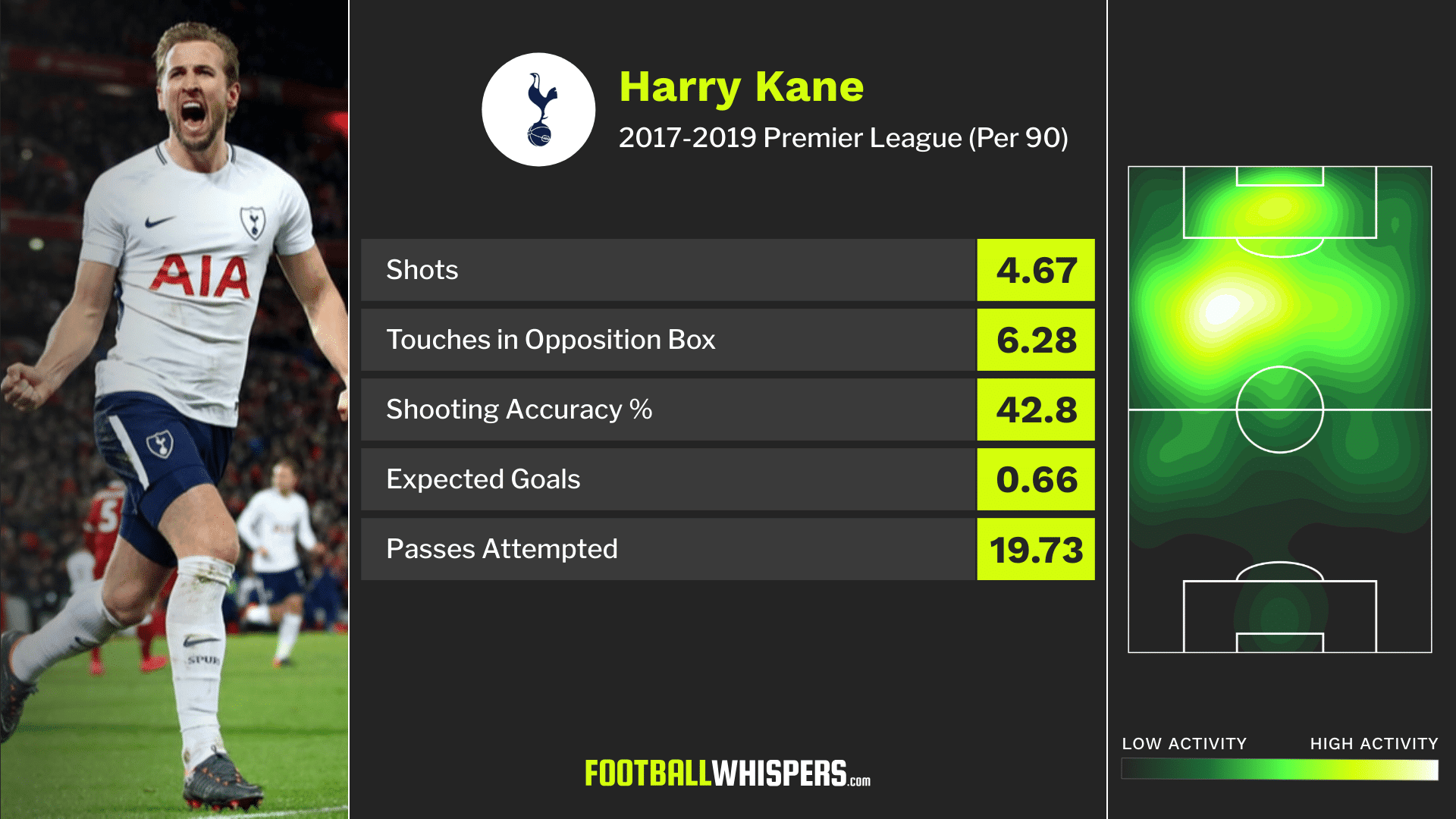 His shooting accuracy remains fairly similar but his expected goals average is dramatically different. Simply put, he isn't as dangerous. His chances aren't high-quality, perhaps due to the fact he's eager to make an impact. Eager to get amongst the goals again.

Granted the sample size for the stats looking at his return is small, 180 minutes or fewer, but there's no point looking at how he performs over a ten-game period after an injury when there's just one match of the season remaining.

A further fact to consider is Spurs lost three of the five matches Kane was involved in after he returned in February. They fell to defeats to Burnley, Chelsea and Southampton while picking up a solidarity win against BVB.

On one hand, goals win you games and despite looking rusty Kane manages to find the back of the net almost immediately after an injury. But you could argue his goals come at the expense of team-mates scoring and Spurs winning.

If Pochettino decides to start Kane on the bench then his decision is justified looking at those stats. If he starts his captain, the England forward needs to deliver.