When you imagine an archetypal Brazilian footballer, you probably conjure up visions of Pele, Ronaldo, and Ronaldinho bamboozling opponents with the type of magical skill that could only be associated with the Samba style. What you do not picture, however, is a player in the mould of Gilberto Aparecido da Silva.

The 6ft 1in defensive midfielder, who turns 40 today, was almost a direct invert of what is expected of a Selecao international. While the stereotypical South American beat was still transparent, as Silva displayed on several occasions, his game revolved around a distinguished sense of discipline.

Like so many of the great defensive minded players, Gilberto’s qualities were most noticeable during his absence. In Brazil, those abilities to sniff out attacking danger before it materialised saw him affectionately dubbed the Invisible Wall; in England, he would become Invincible. While he was never destined to grab the headlines, his importance to two of the most iconic teams of the 21st century cannot be ignored.

For Phil Scolari and Arsene Wenger respectively, the Minas Gerais-born midfielder stopper was the glue that held the foundations for more naturally gifted superstars to thrive. Amazingly, though, the largely unsung hero very nearly missed out on both of those crowning achievements.

Gilberto didn’t earn his first international call-up until nine months before the World Cup and, despite a string of impressive performances, wasn’t even expected to make Scolari’s 23-man party. His shock inclusion signalled a major achievement, but most anticipated that the then-Atletico Mineiro man would spend the next month sitting exclusively in the dugout. After all, the Selecao already had their midfield enforcer in the form of Emerson.

However, after dislocating his shoulder during a bizarre training ground incident, Scolari’s preferred central midfielder was ruled out on the eve of the tournament. Against the odds, Gilberto was selected – ahead of Kleberson, Vampeta, and Juninho – to fill the void.

On June 3rd 2002, the relatively unknown Atletico Mineiro midfielder started Brazil’s first World Cup group game against Turkey. It completed a truly meteoric rise for a player who had turned his back on professional football as a child and had been working in a sweet shop just a few years earlier.

Gilberto was far from a passenger in Scolari’s XI, however. On the contrary, the disciplined tactical genius was the engine that powered Brazil through Group C before beating Belgium, England, and Turkey (again) to book a place in the Yokohama final. Two goals from Ronaldo claimed the headlines, Golden Boot, and victory over Germany. Meanwhile, starring performances from Rivaldo, Ronaldinho and Roberto Carlos completed a Brazilian foursome in FIFA’s official All-Star selection. Despite being overlooked for that personal recognition, Gilberto’s influence had not been ignored by fans or pundits alike. By the time Cafu lofted the famous trophy aloft for the fifth time in Brazil’s history, the previously relatively unknown Invisible Wall had been cast into the global spotlight to be labelled one of the greatest central midfielders on the planet. 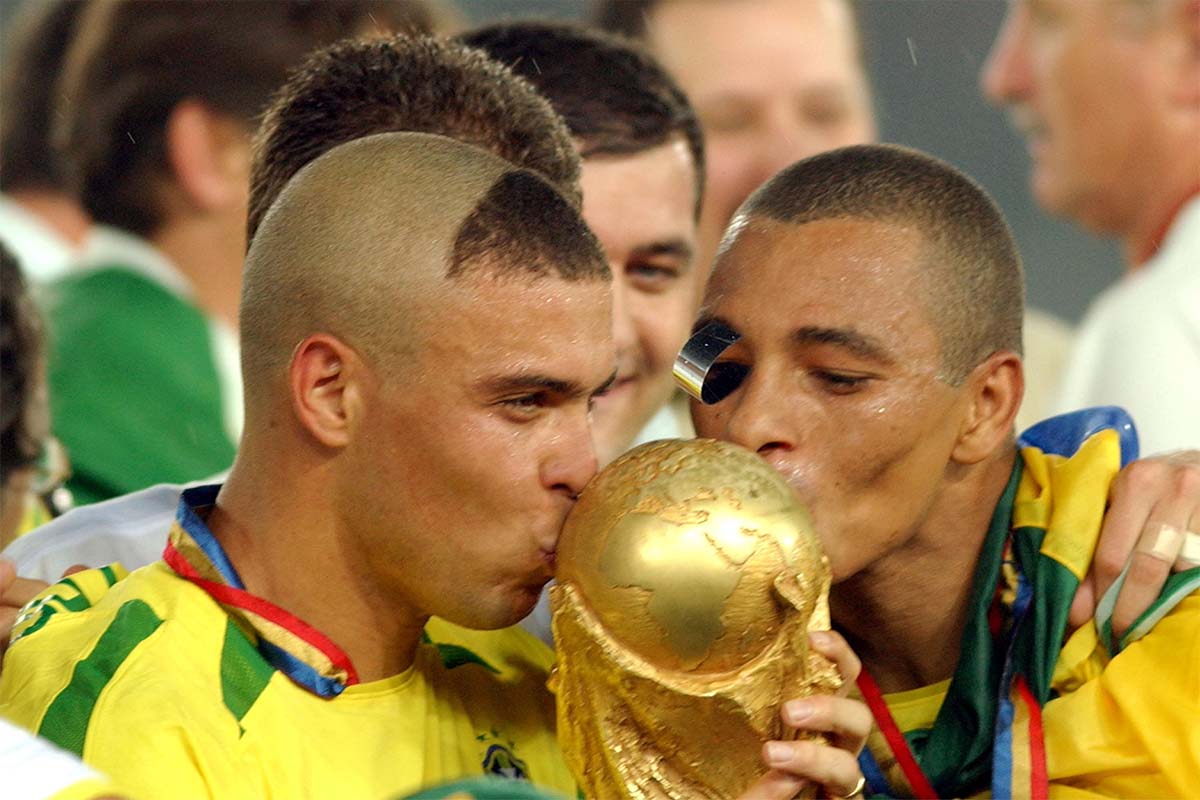 On the international stage, Gilberto’s dreams had already been accomplished. The defensive midfield star would also captain his country to Copa America glory in 2007, but he would need to leave his homeland in order to fulfil his ambitions in the club game.

World Cup heroics had seen Gilberto’s stock rise, and a host of clubs displayed interest in signing the Brazilian. When Arsene Wenger came knocking, the midfielder’s mind had already been made. The Invisible Wall would go on to enjoy a phenomenal six-year stay in London, but the Gunners were made to sweat during a prolonged transfer saga that nearly collapsed due to a combination of Mineiro’s transfer embargo and the player’s struggle to obtain the necessary clearances to play in England. Eventually, just 10 days before the new Premier League kick-off, the 25-year-old officially arrived for a fee of around £4.5m. Not only would the deal prove to be one of Wenger’s shrewdest; it would prove to be one of his most important too.

The Highbury faithful were naturally enthused about their new signing on the basis of those performances at the World Cup, and it wouldn’t take the midfielder long to endear himself to his new cub. Just four days after officially signing, Gilberto came off the bench to score the only goal of the 2002 Community Shield win over Liverpool at the Millennium Stadium. Gilberto and Arsenal would return to Cardiff at the end of the season to beat Southampton via the same scoreline to retain the FA Cup.

Despite finishing second in the league, surrendering the title to Manchester United, Gilberto’s first season in England had been a major success. A central midfield pairing with the colossal Patrick Vieira was blossoming into something remarkable while the Brazilian had also scored the then-fastest goal in Champions League goal by scoring after just 20 seconds against PSV in the group phase. Arsenal’s objective for the following season was clear: to reclaim the Premier League title. They didn’t just accomplish that goal, they did it with a level of class and style that may never be seen again.

Arsenal had stunned the nation in 1997-98 as Wenger’s dynasty started with a bang. They’d arguably been even better in the final season prior to Gilberto’s arrival, winning another league and cup double as Thierry Henry, Robert Pires and Freddie Ljunberg cranked up the attacking flair to 11. By the start of 2003-04, though, the Gunners were blessed with a greater balance and efficiency than ever. As they embarked on their mission of creating football history, Gilberto was easily one of the most integral pieces of the puzzle.

As had been the case with Brazil, Gilberto’s heroics may not have grabbed the headlines. Those were reserved largely for Henry, Pires, and the majestic Dennis Bergkamp. The almost anti-cliched Brazilian never showed any desire to disrupt the harmony, instead focusing solely on completing the dogged work that largely goes unnoticed by the television cameras. Make no mistake, though, the Invisible Wall was an integral ingredient as the Gunners found the recipe for defensive solidarity. Over the course of 38 games, Arsenal conceded just 26.

Gilberto didn’t boast the athleticism of his central midfield parter, but his discipline and reading of the game was faultless. The Brazilian regularly put out fires before they even started and, despite his position, picked up just five bookings throughout the entire campaign. In many ways, his attributes would lay the foundations for a role that would later be perfected by Chelsea’s Claude Makelele. Unlike the Frenchman, though, Gilberto had attacking qualities too.

The midfielder was under no illusions, and played to his strengths superbly. He didn’t boast the silky skills of his contemporaries, nor did he possess an array of passing weapons. Accepting those limitations, Gilberto kept things simple, which allowed him to maintain such high pass percentage ratios without stifling Arsenal’s creativity. Moreover, the Brazilian found the net four times in 32 appearances that season too. Later in his career, he’d underline those attacking qualities by hitting double figures in his penultimate year in London – albeit some of them were penalties.

Very few would pinpoint Gilberto as the most crucial member of the Invincibles team, and nobody would label him the most exciting. However, his performances were a godsend to central defenders Sol Campbell and Kolo Toure while he also helped Vieira control the play also. Arsenal’s success was largely built on the fluid counter attacking play. Gilberto was the final piece to keep those transitional phases smooth, and his league winners’ medal was as deserved as any of those headline makers.

It’s no coincidence that the Brazilian was out injured when the Gunners finally saw their 49-match unbeaten streak come to an end at Old Trafford during the following campaign. Once again, absence had highlighted his often undervalued qualities with greater authority than the vast majority of his individual performances.

Gilberto won a second FA Cup in 2005, coincidentally seeing off Manchester United in the final in what was Vieira’s final game. Following the Frenchman’s departure, the Brazilian stepped up and played a vital role in helping the Gunners reach the Champions League final. Weeks later, he would score Arsenal’s first goal at the Emirates Stadium.

Following his departure from London, Gilberto enjoyed three years at Panathinaikos, winning the Greek Super League and League Cup during the 2009-10 season before finishing his career in Brazil with the modest approach that served him perfectly throughout.

Gilberto was never a player to willingly command attention, and that only added to his attraction. Even in retirement, he has stated that personal belief is the key to accomplishing dreams both on and off the pitch.

After completing the journey from sweet seller to World Cup-winning Invincible in the space of roughly seven years, he is the embodiment of those preachings.