Hansa Rostock face a tricky home fixture in their first match back in the second tier of Germany football as they take on a Karlsruher side that had challenged for promotion last season but eventually ended up in 6th place.

Karlsruher have only lost one of their last nine matches against Hansa Rostock and head into Saturday's clash with the stronger of the two squads. The visitors obviously spent last season in this division while Rostock were playing in Liga 3 and we believe that Karlsruher could be one of the teams pushing for promotion once again this season. Hansa lost their last friendly game against Eintracht Braunschweig and there remain question marks over their ability to in this division.

We're not expecting this game to be filled with goals, in fact, we're backing a both teams to score -no bet with the idea being that Karlsruher are likely to keep a clean sheet and win the game. Both teams have scored in just two of the last six meetings between these two clubs and Karlsruher have kept three clean sheets in their last five fixtures.

Under 2.5 goals have been scored in four of the last five encounters between Hansa Rostock and Karlsruher and we're expecting another tight and tense 90-minutes between the pair this weekend. We've mentioned above that we believe that the visitors have the best chance of winning this game and in terms of a final scoreline, 1-0 to Karlsruher looks to be the best bet. Three of Karlsruher's last five matches have produced under 2.5 goals and they haven't lost any of those games and even kept clean sheets in each of them.

All you need to know ahead of Hansa Rostock vs Karlsruher

Hansa Rostock finished second in Liga 3 last season and earned automatic promotion back to the 2. Bundesliga. The hosts aren't a team with money to splash around, in fact, the only money they have spent went on Ridge Munsy and the rest of their signings have all been via free transfers. Behrens and Rizzuto both bring with them some 2. Bundesliga experience, which could prove crucial to Hansa staying in this division.

Karlsruher finished 6th in the 2. Bundesliga last season and while they challenged for promotion, that bid slipped away and they ended up 10pts off third-placed Holstein Kiel. Much like their hoss this weekend, Karlsruher haven't spent any money so far this transfer window but they have managed to bring in some quality at left-back in the form of Norwich City's Philip Heise who signed as a free transfer.

Hansa Rostock vs Karlsruher – Your Questions 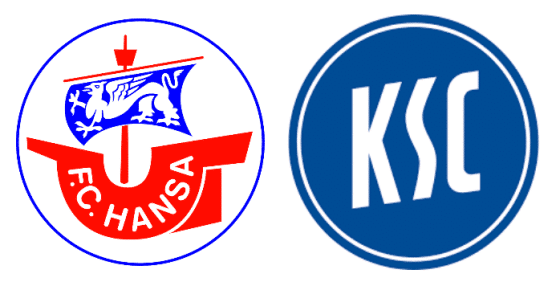