Throughout January, Napoli midfielder Allan was linked with Paris Saint-Germain.

However, despite incessant speculation, the Brazilian remained with the Italians. For Napoli boss, Carlo Ancelotti, the window's deadline on Thursday night relieved him of a headache that would have come with losing one of his key players halfway through the season.

However, having kept Allan, the club look set to bid farewell to a figure with whom the fans share a much closer affinity; Marek Hamšík.

The Slovakian, so long a constant creative presence in Napoli's midfield, seems destined for China, with Ancelotti confirming the player was in talks over a move following the 3-0 win over Sampdoria on Saturday, during which Hamšík exited the field at the Stadio San Paolo to a standing ovation.

For Napoli fans, not since Diego Maradona have they adored a player so greatly. But in football, eras can often be short and the Partenopei faithful can be glad they got to see Hamšík don the famous blue jersey for almost 12 years.

It's been quite a ride. He joined the club in 2007, when they had just secured promotion back to Serie A. From there, thanks to the financial backing of chairman Aurelio De Laurentiis, Napoli banished memories of second-tier obscurity and the cusp of bankruptcy to become one of European football's most entertaining sides.

Those who watched Serie A on a weekly basis knew of the exceptional talent in the club's ranks back then but, to many, the 2011/12 season, when they reached the Champions League's knockout rounds, shone the light back on one of Italy's great clubs. 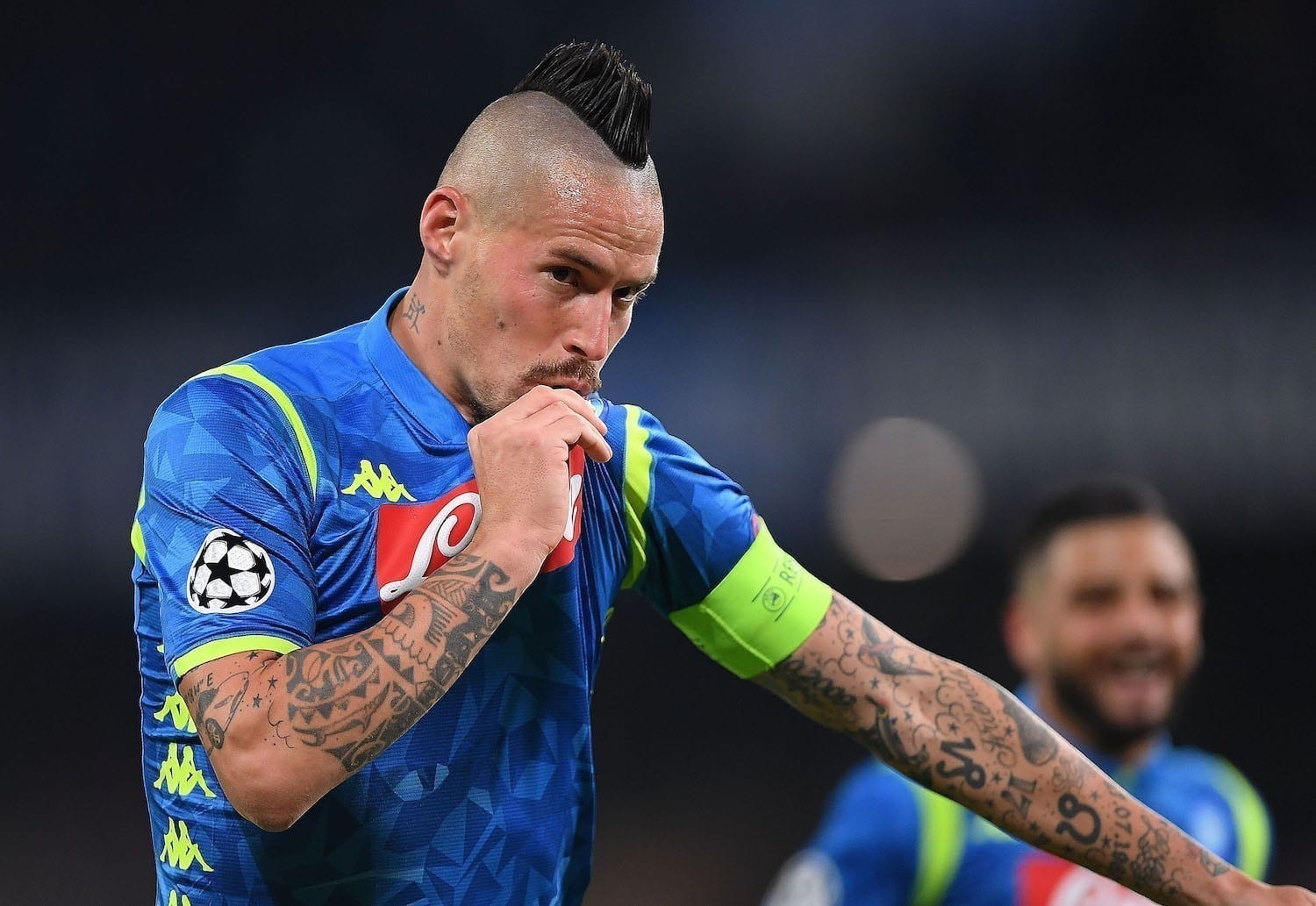 And they were a hugely exciting team. They had the industry of Gökhan Inler and Walter Gargano in midfield, the enterprise of full-backs Christian Maggio and Andrea Dossena and the leadership of Paolo Cannavaro at the back.

But up front, they boasted a real show-stopping trio comprised of Edinson Cavani, Ezequiel Lavezzi and Hamšík, who together terrorised the defences of Serie A.

A devastating mix of pace, creativity and clinical finishing, the Cavani-Lavezzi-Hamšík connect fuelled Napoli's revival as they earned admirers throughout Europe and won the 2012 Coppa Italia.

Their partnership was brutally cut short, however, shattered by the irresistible riches of Paris Saint-Germain, who signed Lavezzi in 2012 and Cavani a year later.

But despite their departures and interest in his own services from other clubs, Hamšík remained loyal to Napoli, becoming the team's leader, talisman and creative heartbeat. 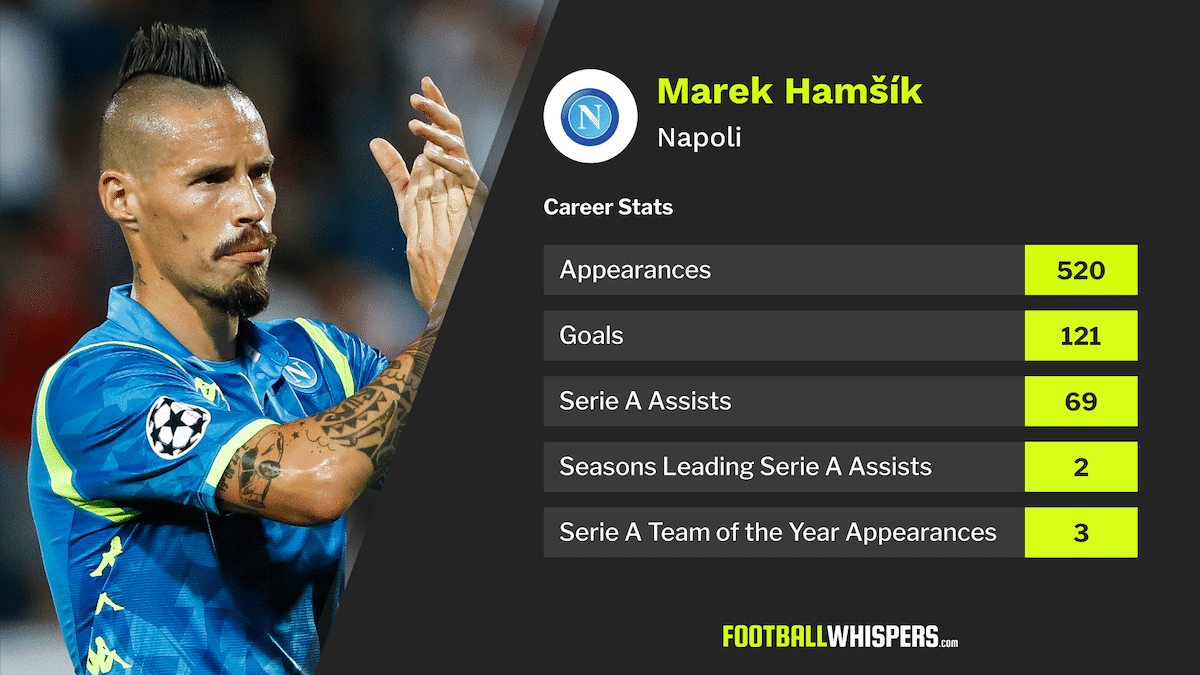 Now, though, having worn the captain's armband since 2014, surpassed Diego Maradona as the club's all-time leading scorer and racked up well over 500 appearances (also a record), the unmistakable Slovakian has decided it's time for a new challenge.

Players that seek moves to China are often accused of favouring financial gain over a more prestigious career in one of Europe's top leagues but nobody can ever doubt Hamšík's passion, commitment or loyalty over such a long period of time.

He impressed from the outset at the Stadio San Paolo but despite his form over the first two years, the club still only finished 8th and 12th in the table. In 2009, though, the winds of change came as De Laurentiis dismissed director Pierpaolo Marino and head coach Roberto Donadoni in the space of a few weeks.

In came Walter Mazzarri, who had impressed De Laurentiis by reaching the Coppa Italia final with Sampdoria. Under him, Napoli became a wonderfully slick counterattacking unit, Mazzarri devised a system that brought out the best in Hamšík and Lavezzi before Cavani arrived from Palermo as a replacement for Juve-bound Fabio Quagliarella.

The Uruguayan proved an instant hit, scoring 33 goals in all competitions in his first season and 26 in the league as Napoli finished third. It earned him a place in the Serie A team of the year alongside Hamšík.

Cavani soon had a calzone named after him but Hamšík's contributions may elevate him above pizza, perhaps something closer to the famous Maradona mural that depicts the Argentine dribbling the ball in Naples' Spanish Quarter.

Of course, while Hamšík's legacy at Napoli is beyond question, it's the absence of a Scudetto in his trophy cabinet that will haunt him.

While Maradona inspired Napoli to two championships, in 1987 and 1990, the Slovakian has dreamt of, flirted with, but never touched the famous trophy.

And, for all his brilliance in midfield, it is a sore spot. Hamšík has always said winning a Scudetto for the people of Naples was his biggest dream. Now, if they Ancelotti's side are to challenge the supremacy of Max Allegri's Juve, the 31-year-old looks as though he won't be a key actor but an interested onlooker, 5,000 miles east of his stomping ground.

But make no mistake, while he may not have been able to deliver a league title for Napoli, he has given the fans countless memories over the last 12 years.

After Cavani and Lavezzi left Naples, Hamsik said he wanted to emulate the loyalty of Francesco Totti and Alessandro Del Piero at Roma and Juventus respectively. Two loyal lieutenants to their clubs, Totti and Del Piero, of course, experienced the unbridled joy of capturing a Scudetto.

For Hamšík, three-times a Serie A runner-up, he'll most likely never know that feeling. What he does know, however, is that his legacy at Napoli remains unblemished. Hamšík shared a deep connection with the club's fans because he recognised that, to them, football is a religion. It was to him, too. While he may be leaving now, he can never be accused of letting the Stadio San Paolo congregation down.