West Ham United’s search for a big-money striker had become something of an annual event.

You couldn’t knock the Irons' ambition but for whatever reason, they just couldn’t get deals over the line. But that came to an end this summer when the Hammers broke their transfer record to land Eintracht Frankfurt’s Sébastien Haller.

The 25-year-old arrived in a deal worth £45million.

Some forwards take time to adjust to the rigours of the English top-flight but the Frenchman is already bullying opposition defenders. In his three outings for Manuel Pellegrini’s men, Haller has netted three times.

He scored twice in the 3-1 victory over Watford and followed them up with the opener against Norwich City as West Ham headed into the international break with seven points from a possible 12.

They sit in seventh position and are one of four clubs just a single point off of third-placed Leicester City.

It may be early doors but Pellegrini’s men have started the campaign well. It’s a season of potential upsets too with many of the traditional top six currently in transition. What is usually a bolted door is now ajar and the Hammers are one of the teams primed to take advantage of this opportunity.

But a lot hinges on whether they can keep Haller well serviced. So far, West Ham are holding up their end of the bargain. 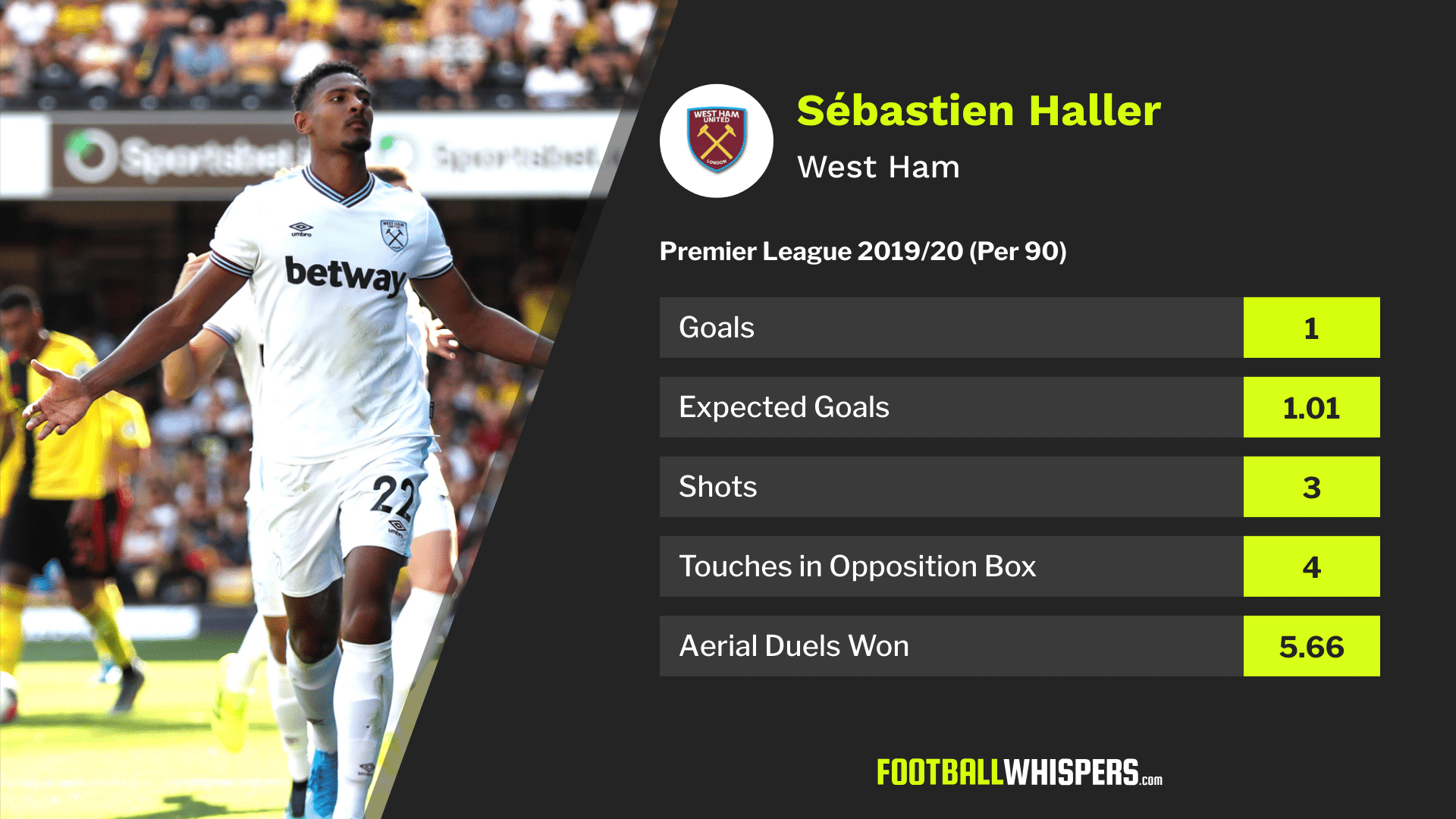 The 25-year-old has managed to transfer his Bundesliga form and has hit the ground running.

It may be a small sample size but Haller is averaging the same numbers as he posted during his final season in Germany. He’s winning over five aerial duels, averaging over 0.50 big chances scored, four or more touches in the opposition’s box and one or more completed dribbles per 90.

These numbers might not seem overly impressive but very few players manage to adapt to life at a new club, in a different league, with such ease.

If you’re a West Ham fan, all of this should be encouraging. The more familiar Haller becomes with his team-mates and the opposition, the more of an impact he’ll have. An intriguing thought given how impactful he’s already been.

His goal output will likely decrease as an expected goals average of 1.01 isn’t sustainable for a player not part of Pep Guardiola’s attack. He’s landing 66 per cent of his efforts on target which is ridiculously high but the striker managed to get 48 per cent of his shots on target during the 2018/19 Bundesliga campaign. He’s frugal with his chances and tends to make the keeper work.

Last season, Haller had an expected goals average of 0.57 and slightly outperformed it (0.61). A similar performance for the Hammers could be enough to fire them into Europe.

If he manages to take his game up why couldn’t the top four be a possibility?

What makes the Frenchman so effective is how simple he makes the game. He’s good at linking play outside of the area but as soon as the ball is worked wide he’s looking to get into the penalty box.