This is a preview of the battle for the play-off places between Halifax and Chesterfield at the Shay Stadium.

Halifax took the battle for the top seven places to the final day after beating Maidenhead United 2-1 at the York Road Stadium. Chesterfield remained in the top seven after a 2-1 comeback win over Dagenham and Redbridge. The best tips for this match would be:

Chesterfield have been quite consistent over the last few weeks and the comeback victory over Dagenham showed the kind of spirit within the team. Halifax have had a poor run at home with three defeats in the last four. Meanwhile, Chesterfield have just one defeat in the last eight trips. Even though Halifax were able to narrowly edge the reverse fixture, the pressure to finish in the top seven will ultimately fall upon Halifax – a team which has struggled at home.

Halifax have only managed six goals in as many home games coming into this encounter, while they have shipped almost twice the tally. The poor defending has been a strong contributor to the team falling out of the top seven in the last few weeks. Meanwhile, Chesterfield are quite the opposite on the road with 10 goals scored in just six conceded in the last six games.

Halifax will be determined to finish in the play-offs with a win in the final regular season game. The motivation is likely to help the team push players forward and the odds are likely to favour the home team – at least in the first half. Chesterfield might not be happy to counter-attack alone and they will have plenty of gaps to exploit.

Halifax vs Chesterfield: Preview of the Battle for the Top Seven

It is remarkable that Halifax Town can still end up in sixth place and match last season’s finish under Pete Wild. The club need a lot of other results to go their way while they complete the job against Chesterfield. This is likely to be quite difficult with Halifax struggling for form – especially in home matches. In such a scenario, there will be added pressure on the players which could prove detrimental to their hopes of a top-seven finish.

After having spent almost the second half of the campaign in the top seven, Chesterfield will not be keen to let the seventh position slip away in the final game of the campaign. A draw may not be sufficient for James Rowe’s team, as the other results will also have a say.

Questions about Halifax vs Chesterfield 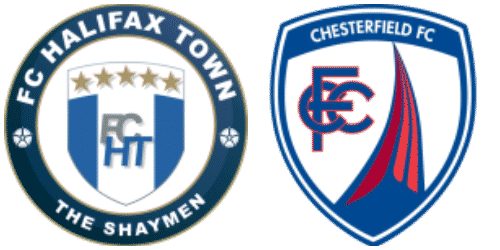 Where is the match scheduled? – The Shay Stadium

Which team is the favourite to win? Chesterfield