Despite fears upon his initial appointment in the summer of 2016 that José Mourinho would neglect Manchester United's proud tradition of nurturing homegrown academy products into first-teams stars, several of the club's youngsters have featured regularly under the Portuguese boss.

England international Marcus Rashford appeared in 35 of United's 38 Premier League games last term; Scott McTominay was, at one point, given the nod in midfield ahead of the £89million Paul Pogba; and 17-year-old Angel Gomes has made two first-team cameos to give fans a tantalising glimpse into the future.

But the best may yet be to come. Dutch winger Tahith Chong, signed from Feyenoord's youth ranks two years ago, is shining within the club's under-age set-up and looks to have all the tools to make an impact at Old Trafford in the not-too-distant future.

The Netherlands youth international suffered a serious cruciate knee-ligament injury last year, forcing him out of action for ten months. Since his return Chong has looked stronger and better than ever, putting in a string of highly impressive performances.

With seven goals and seven assists in 20 outings in the Under-18 Premier League last season, Chong's form so impressed that he was rewarded with a debut for the under-23s in a January fixture against Tottenham Hotspur under the bright Old Trafford lights.

Taking the promotion in stride, the 18-year-old, not content to simply make up the numbers among his more experienced team-mates, stood out in every possible way.

Aside from his vast technical attributes, it is Chong's braveness and maturity that will have most impressed Mourinho; with fellow teenage prodigy Gomes having already featured for the first team, a senior debut for Chong can't be too far away.

Despite a disappointing 3-1 defeat on the night, Chong looked head and shoulders above every other player on the pitch, marking the occasion with a well-taken goal in the first half.

Below, we see how Chong's alertness and anticipation led to his goal against Tottenham. As the Spurs player in possession looks to play the ball back across the face of his own penalty area, the United No.7 spots the chance to intercept. 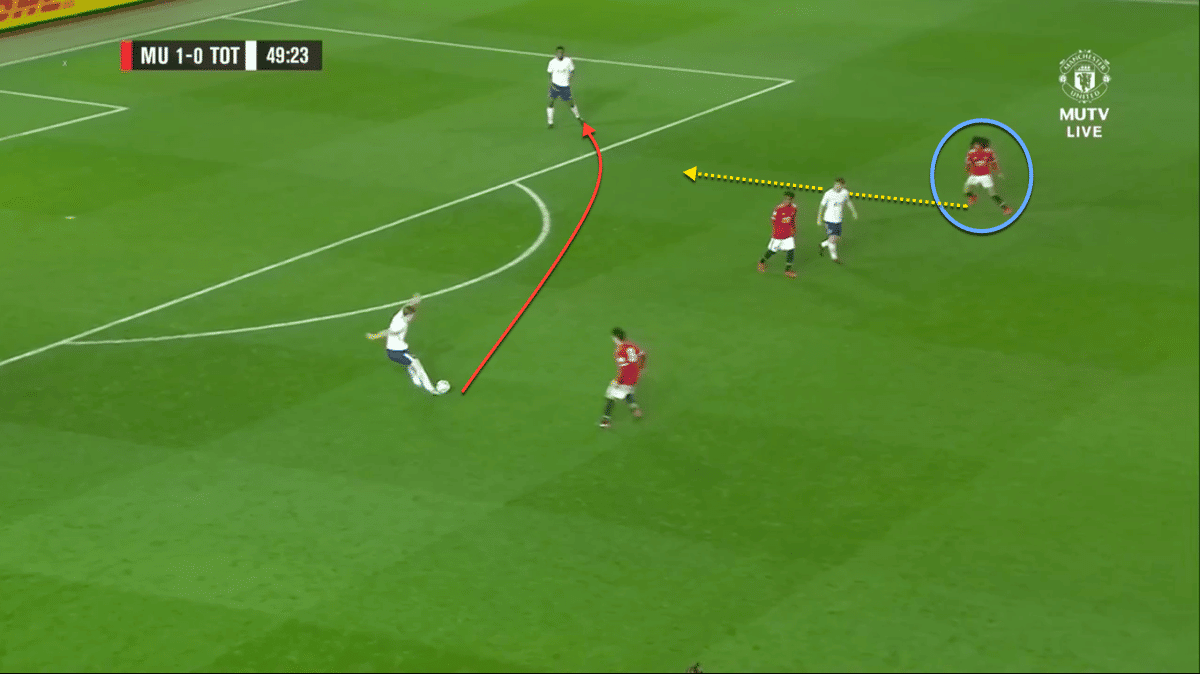 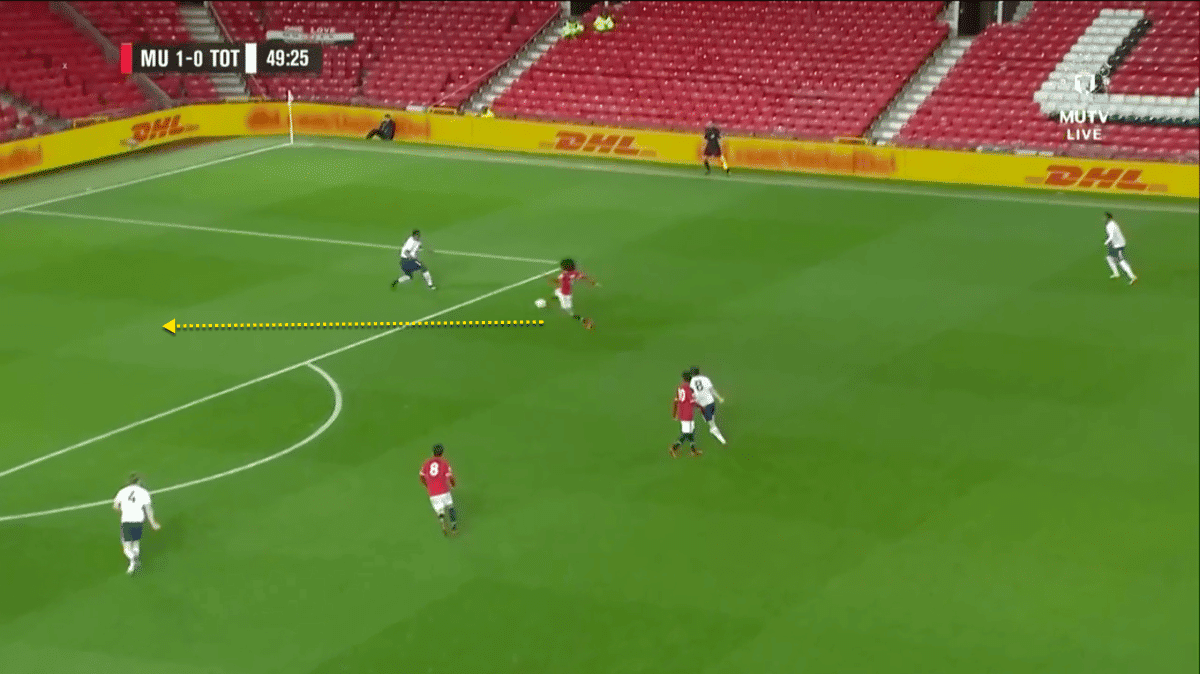 Having read the play perfectly to steal the ball, Chong then makes a beeline for goal, powering past the deepest Tottenham defender with electric pace and immaculate close control. 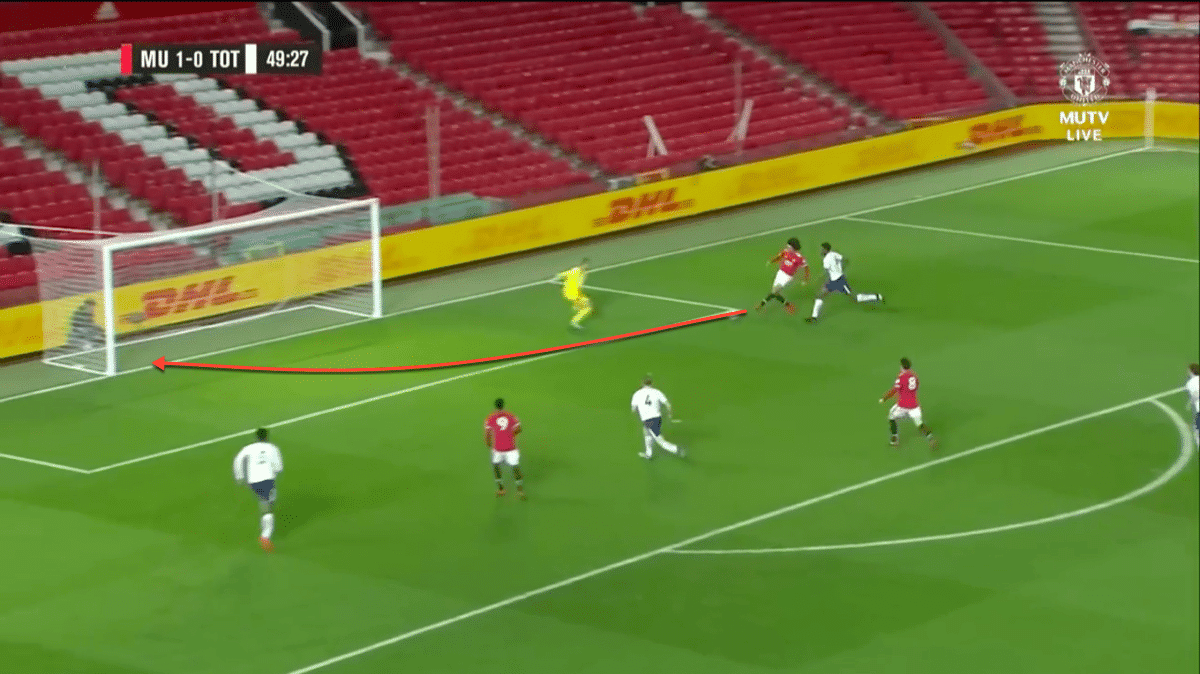 When through on goal, Chong is coolness personified, gently caressing the ball beyond the helpless goalkeeper, nestling into the far corner.

Chong's most striking attribute is unquestionably his dribbling. But when combined with his commendable workrate and willingness to track back and defend, the Dutchman's ability to ghost past opponents becomes a powerful weapon when transitioning from defence into attack.

We see this in perfect evidence here, where Chong has tracked back deep into his own half and won possession with a clean yet firm challenge.

His first thought then is immediately to drive his team forward, bursting into the opposition half at breakneck speed; even when carrying the ball, Chong is too fast for opponents to keep up with in a straight race.

Taking the ball deep into opposition territory, Chong draws the attention of four defenders on the edge of the penalty area before sliding a pass through for striker Josh Bohui to shoot for goal.

This time, we see how Chong's raw speed and ability to progress the ball helps alleviate pressure in defensive situations. Picking up a loose ball inside his own penalty area, once again, he is off and running, carrying possession clear of the danger zone, but doing so in a controlled manner, protecting the ball rather than lumping it clear and gifting in straight back to Spurs.

As he approaches the halfway line, it looks as though Chong's progress has been halted as he is closed down by a Tottenham midfielder, but an improvised, Cruyff-esque turn inside into space allows him to keep travelling forward.

Finally, Chong is stopped, but by illegal means, winning a free-kick for his side a full 45 yards from where he first collected the ball, taking United further up the field and maintaining control of possession throughout.

Chong is capable of playing on either wing, but he tends to start most regularly on the right side, drifting around the pitch as he sees fit and cutting inside on to his favoured left foot. 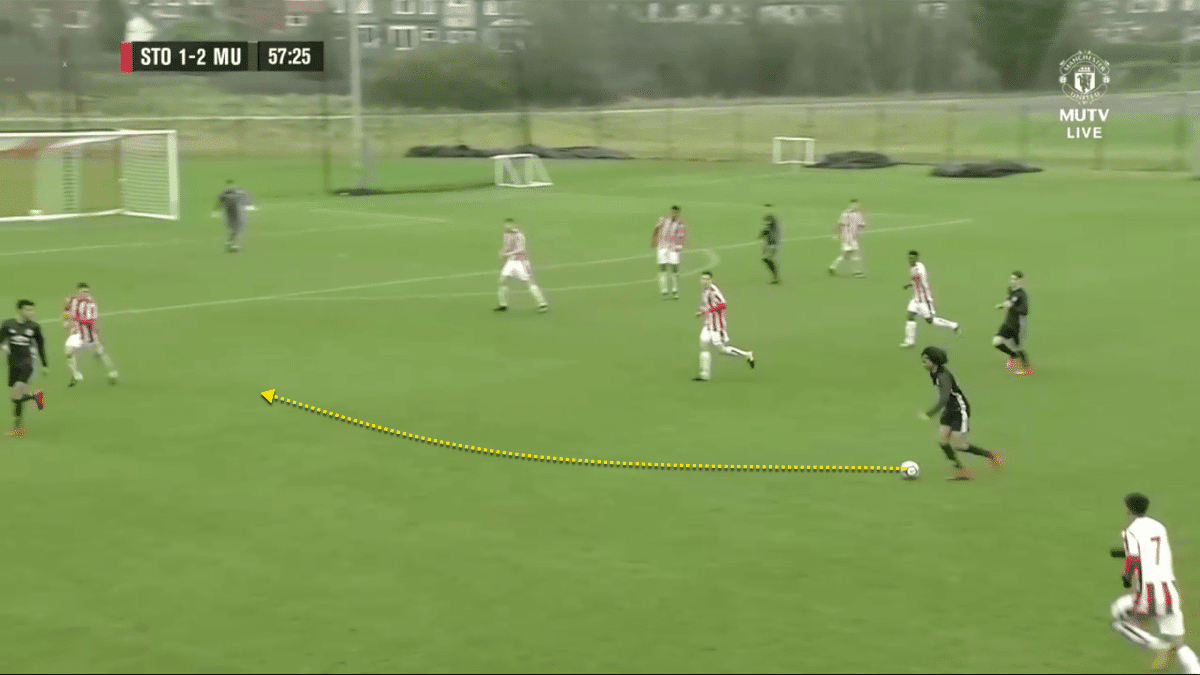 An expert at identifying and exploiting space ahead of him, Chong is near-impossible for opposing sides to man-mark. As the above image shows, from an under-18s game against Stoke City, the former Feyenoord teenager will drift right the way across the pitch in order to poke holes in the opposition's backline. 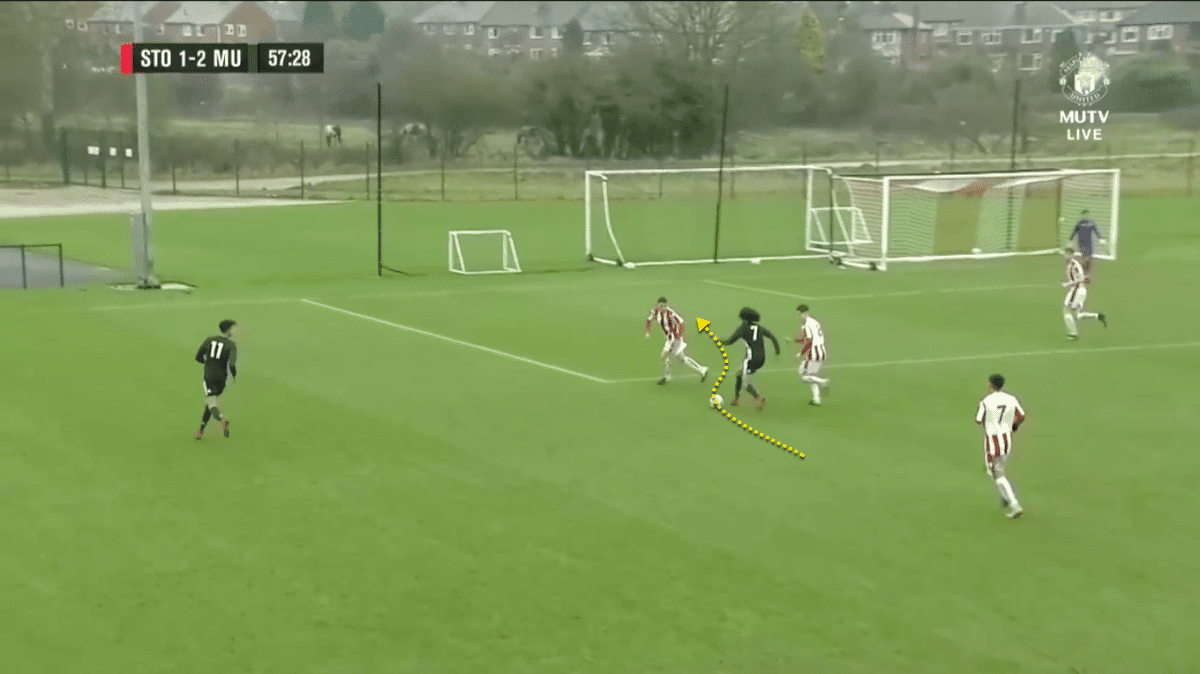 As he drives forward towards the penalty area, Chong intelligently uses the unmarked winger to his left as a decoy, fooling the two attending Stoke defenders into thinking a simple square pass is on the cards before skilfully running between them into the box. 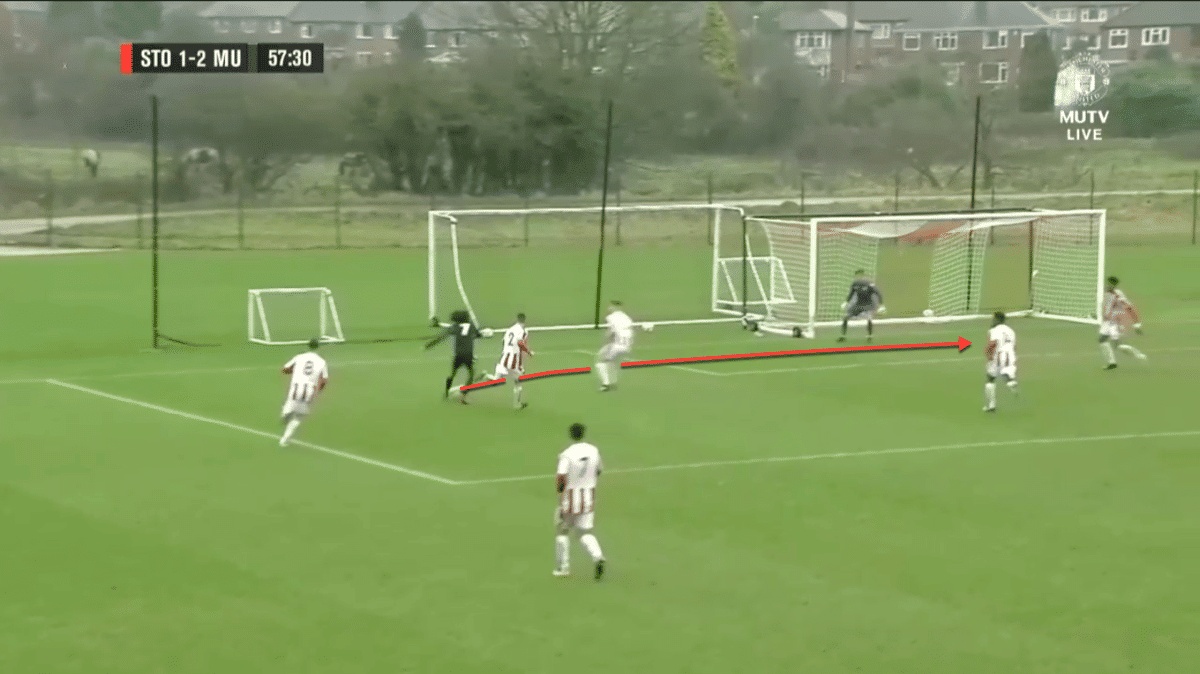 As he approaches the byline, now on his stronger left side, Chong produces a dangerous, low, whipped cross which flashes across the six-yard box, begging to be dispatched by an on-rushing striker.

With his pace, control, balance and work ethic, Chong's brand of wingplay is a throwback to the days when Ryan Giggs and Andrei Kanchelskis would fly down the flanks at Old Trafford. And with a fan base which holds both dynamic wide men and academy graduates is high esteem, Chong is a sure to be a hit at United.