Hosts Hacken sit joint-top of the Allsvenskan table alongside Hammarby and AIK with Hammarby top on goal difference. This weekend, 28th May, Hacken take on a Sirius side that sit 6pts and seven places below them in the table but the visitors did secure a 3-0 win the last time the two sides locked horns.

Hacken have started the new season really brightly and look like they will contend for the Allsvenskan title this season. The hosts have won three of their four home games in the campaign so far while Sirius have only managed to win one of their five away trips so far, so you can see just why we're going with a home win on Saturday.

Both teams have found the back of the net in four of the last five league meetings between these two clubs, and we're predicting that neither side will keep their clean sheet intact on Saturday. Each of Hacken's last six league games have ended with both teams getting on the scoreboard, while both teams scored in Sirius' last match away at AIK which ended in a 2-2 draw.

All you need to know about Hacken vs Sirius

Hacken will move top of the table if they avoid defeat

On Sunday afternoon, Hacken made the trip to the Eleda Stadion to face Malmo. The first half between the pair ended goalless but Hacken did take the lead through Jeremejeff just 7-minutes into the second forty-five. The next goal was always going to prove crucial to the end result and it was Berggren of Hacken that got it, putting the visitors 2-0 up with under half-an-hour left to play. Malmo did manage to pull a goal back 13-minutes from time to set up a nervy end to the game but the visitors held on to secure the away win.

Sirius faced a tricky away trip at AIK on Saturday but did manage to get two goals in front throughKouakou and Karlsson Lagemyr, only for Larsson to pull a goal back for the hosts in the 43rd-minute and to then see Otieno make it 2-2 in first-half stoppage-time. The second forty-fail didn't live up to the standards of the first with neither side able to care out another goal, so the scoreline ended 2-2.

IK Sirius: Ahlin, Ssewankambo and Nwadike could both miss the trip to Goteborg through injury.

Hacken vs Sirius: Your Questions 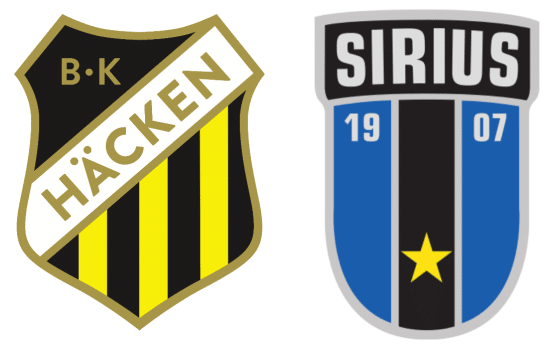