Ligue 1 has been very kind to the Premier League in recent years.

Tottenham Hotspur signed Hugo Lloris from Lyon. Manchester United and Liverpool raided Monaco to bring Anthony Martial and Fabinho to the Premier League. And Arsenal spent a then club-record fee to convince Lyon to part with Alexandre Lacazette.

Countless other players have trodden the same path and it doesn’t look like it’ll come to an end anytime soon. According to reports, Metz forward Habib Diallo is a transfer target for a number of Premier League clubs.

The 24-year-old has caught the eye this season having netted eight times in just 13 Ligue 1 outings. Only Wissam Ben Yedder and Moussa Dembélé have more goals than the one-cap Senegal international this term in what is his first season in the French top-flight.

He scored 26 goals for Metz last season as they clinched promotion with a first-place finish in the second division. The big question heading into the new campaign was whether or not he could make the step up.

Chelsea, Tottenham and Leicester City are among the teams keeping an eye on the £10million-rated forward. Such a fee is a drop in the ocean for Premier League sides but for Metz that would be a huge windfall, one they simply couldn’t risk turning down.

But is Diallo ready for a move to England? The answer to that hinges on whether or not his current form is sustainable.

If it is, then a £10million deal doesn’t even register as a gamble. If, however, he’s just running hot, clubs battling for a top-four finish shouldn’t waste their time. 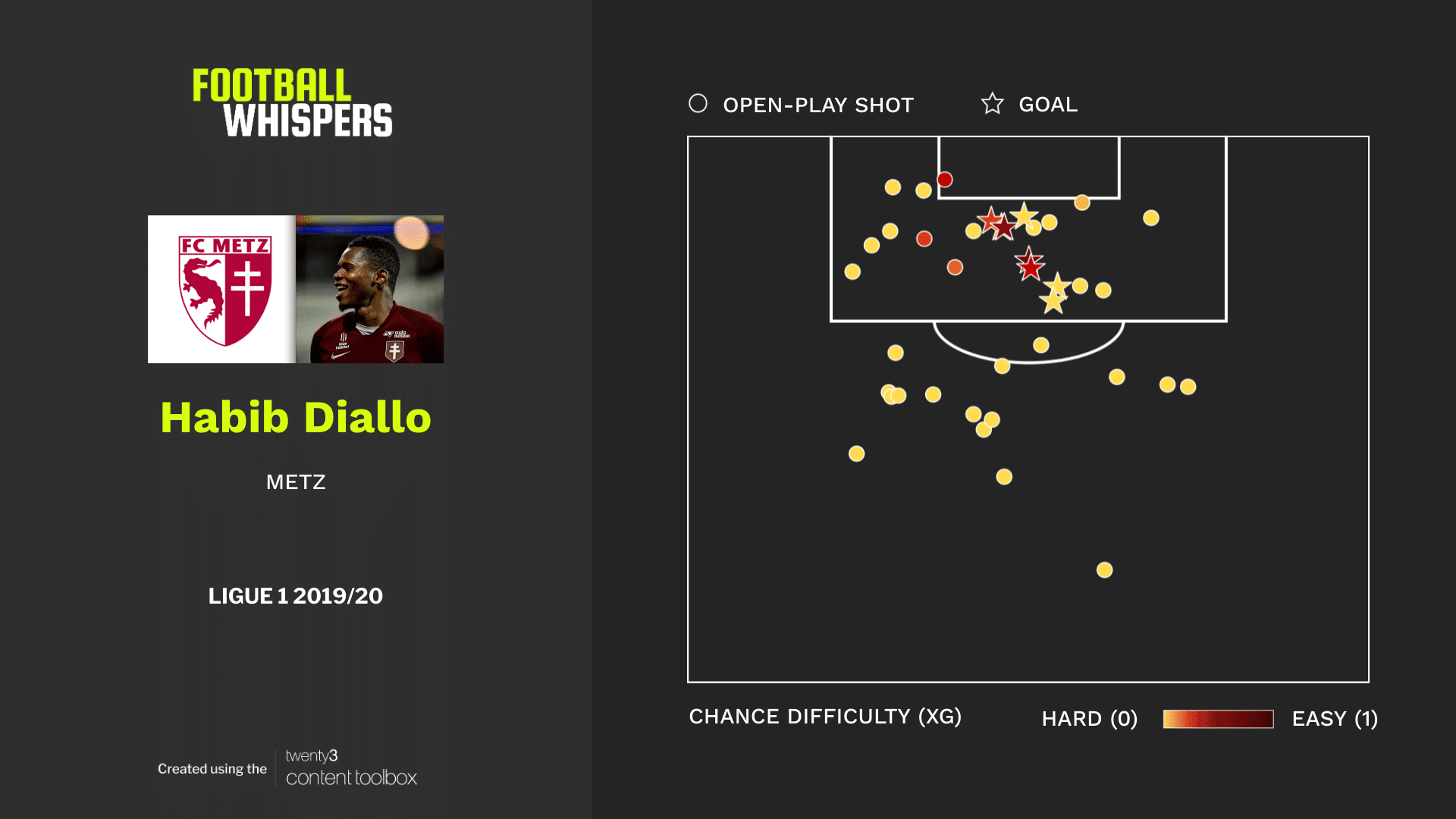 So far this term, Diallo has averaged 0.69 goals per 90, of which 0.61 arrived in open-play.  He's massively outperforming his expected goals average of 0.33 but the best forwards tend to do so. However, the small sample size makes it difficult to truly judge whether the Metz forward is elite or whether he's just in a rich vein of form.

Diallo is averaging 3.12 shots per 90 and landing 44 per cent of them on target. His volume of shots is impressive given he's not even having five touches in the area in most matches. He's by no means feeding on scraps but it shows he's not getting a huge amount of service.

His shot map, shown above, could be a little better. He's taking a fair amount of efforts from distance, 16 in total, but hasn't managed to convert one of those so far. By comparison, he's scored eight of the 22 shots he's had in the box. Perhaps a little more patience is required on Diallo's part so he's able to take higher-value efforts on a more regular basis.

After all, in the Premier League, players need to be frugal when it comes to opportunities. Diallo, right now, is trying to score from ridiculous positions on a pitch when team-mates are in better areas. 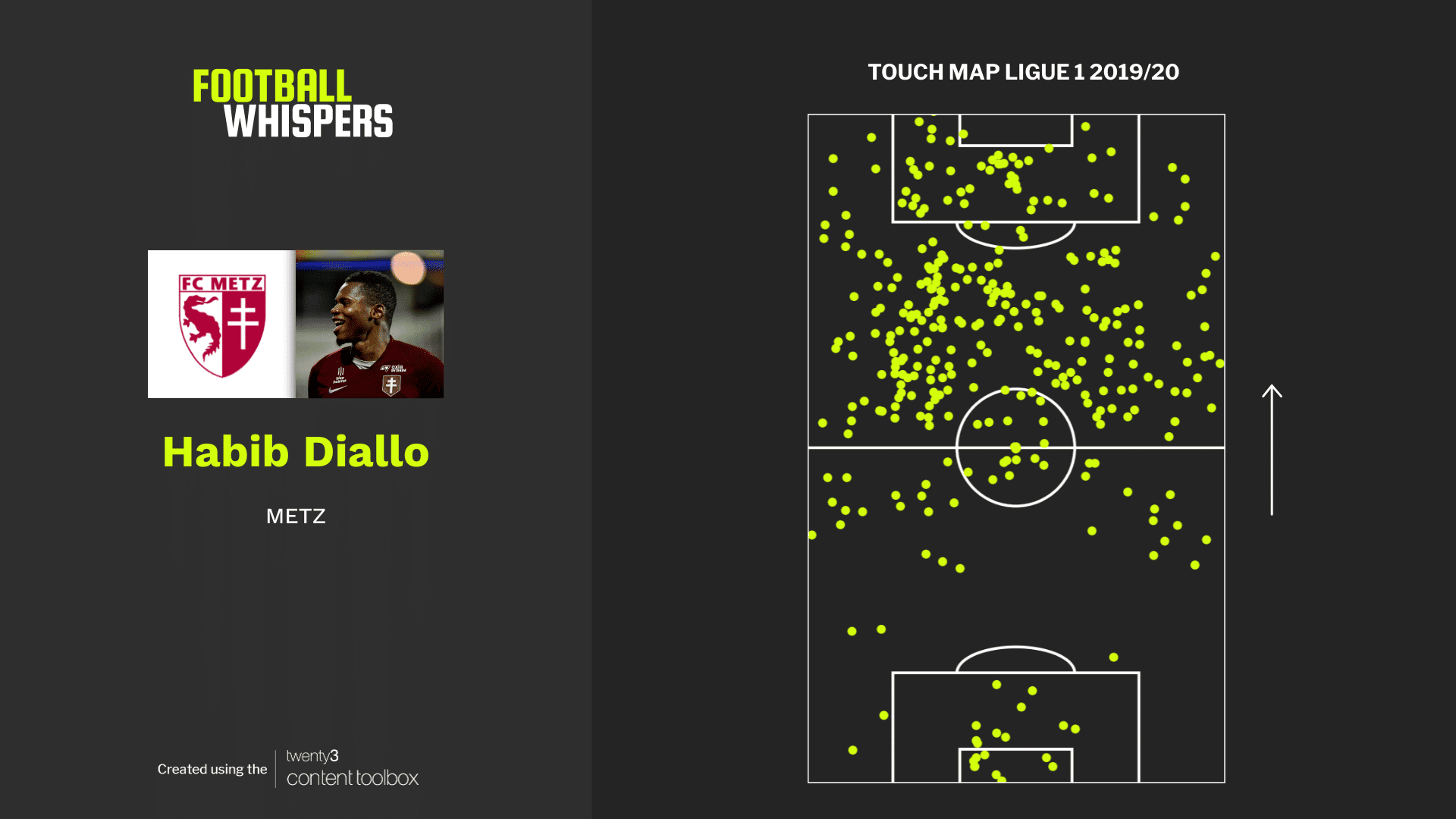 The touch map above paints a picture of an all-round busy player. Despite being deployed as a forward, Diallo is popping up across the pitch. He drops deep to link play with midfielders and drifts into wide areas to create space for team-mates. This season, Diallo is averaging close to two possession regains in the middle third on a per 90 basis, highlighting his willingness to do the defensive work.

The 24-year-old is something of a throwback to an old-fashioned No.9. He doesn't attempt many dribbles and he's not a creative hub. But Diallo is a battering ram, winning over four aerial duels per 90 while involving himself in ten or more every single game on average.

He does his best work in the penalty area but that does mean he relies on service if he's to score on a regular basis. Without it, he's nowhere near as much of a threat. He could, though, be a useful out ball if goals aren't viewed as the be-all and end-all.

For example, both Leicester and Chelsea are deadly on the counter. While Diallo might not be the one finishing off these moves, he could be integral to their build-up. With players running off him, the penalty-box predator could actually turn into something of a creative force due to the manner in which he manages to occupy multiple opponents.

It'd be different with Spurs. In a Mauricio Pochettino system, he'd be the man in the box looking to pounce on loose balls and great team moves. He could provide back-up for Harry Kane but the intriguing prospect would be to see him deployed alongside the England international in certain matches. Given Kane likes to drop a little deeper from time to time, they could complement each other well.

Diallo is far from the finished product and he's not a game-changer, but he's never going to be for £10million. However, that doesn't mean he can't be developed into a useful squad player suited to the rigours of the English top-flight. He's a gamble worth taking.