In football, the term ‘yo-yo team’ refers to sides incapable of remaining at one level. Instead, they bounce from Premier League to Championship and back again through a series of relegations and promotions. At present there is no such thing as a ‘yo-yo player’, but if the term did become widely accepted, Gylfi Sigurðsson could fall into that bracket.

The Icelandic international has yet to establish exactly what level he belongs at. After a highly influential first spell with Swansea City he failed to leave much of a mark at Tottenham, but since returning to Swansea he has re-confirmed his quality. And, after some inspired form this season, he appears determined to move up the Premier League hierarchy once again.

During the recent international break, in which he scored for Iceland against Kosovo, Sigurdsson discussed his ambition for the future.

“It would be a dream to play for one of those big clubs,” he told his country’s media. “Hopefully if I continue doing well for Swansea and Iceland, then in the near future I can play in a big club.”

At 27 years of age, Sigurdsson is at the peak of his considerable powers. And, with Swansea teetering dangerously close to the Premier League’s relegation zone, he looks out of place. Regardless of whether the Welsh side do eventually stay up or go down, their star player could be set for a summer move. It would be the least he deserves on the back of what has arguably been his finest season in an individual sense.

Few others can better the playmaker for technique. Indeed, Sigurðsson’s entire career has been built on his technical fundamentals of close control, creative instinct, smooth passing and sound finishing. What he has always lacked in pace or one-on-one skill he has made up for with a supreme comfort on the ball. His best assets have been on show throughout 2016-17, despite the overarching chaos often present at Swansea.

No other Premier League player has set up more goals this term thus far. With 11 assists to his name, Sigurðsson has not only evinced his sophisticated touch, passing range and accuracy from set pieces, but also his awareness in the attacking phase. A perceptive attacking midfielder with an understanding of space and the vision to open up a defence, he has relished the creative license handed to him since Swansea appointed their third manager of the campaign, Paul Clement, in January.

“He gives me a completely free role in the attacks … offensively I can do what I want,” Sigurðsson told reporters of the responsibility handed to him by his new coach.

“I’ve enjoyed Clement’s work an incredible amount. You can see it on the training ground why Carlo Ancelotti took him with him wherever he went … He is a great coach.”

The new ‘free role’ Sigurðsson has in the attacking phase has proven to be highly effective. Since Clement’s arrival, the Icelander has scored three goals and set up a further five in nine Premier League appearances. While he was important to Swansea before, in the last three months he has been relentlessly productive.

But, unlike many other attacking midfielders, the former Tottenham man is a willing and able participant in the defensive phase.

Before Clement took charge, Swansea were defensively muddled, to say the least. Replacing Francesco Guidolin with Bob Bradley led to some shambolic work at the back, as they conceded at an alarming rate of 2.64 goals per game under the American’s auspices. The legacy of the managerial instability and poor organisation is that they still have the Premier League’s worst defensive record by far, having let in 63 goals in just 29 games.

Having conceded nine goals in their last four games, Swansea’s defence is still an issue. Yet, under Clement, the team has undoubtedly been more cohesive in general, particularly without possession. Sigurðsson, rather surprisingly given his attacking impulses, has been pivotal to this, showing good retention of position and pressing in the defensive phase.

Clement’s “idea is to have [me] wide to help seal the midfield,” Sigurðsson recently told reporters. Other creators would baulk at such a task, but he has stuck by it intently. His work rate was indicated by a statistic shared by Swansea’s official Twitter page prior to their last league outing – a defeat to Bournemouth – that stated: “Sigurðsson has covered more ground [318.2km] than any other player in the [Premier League] this season.” 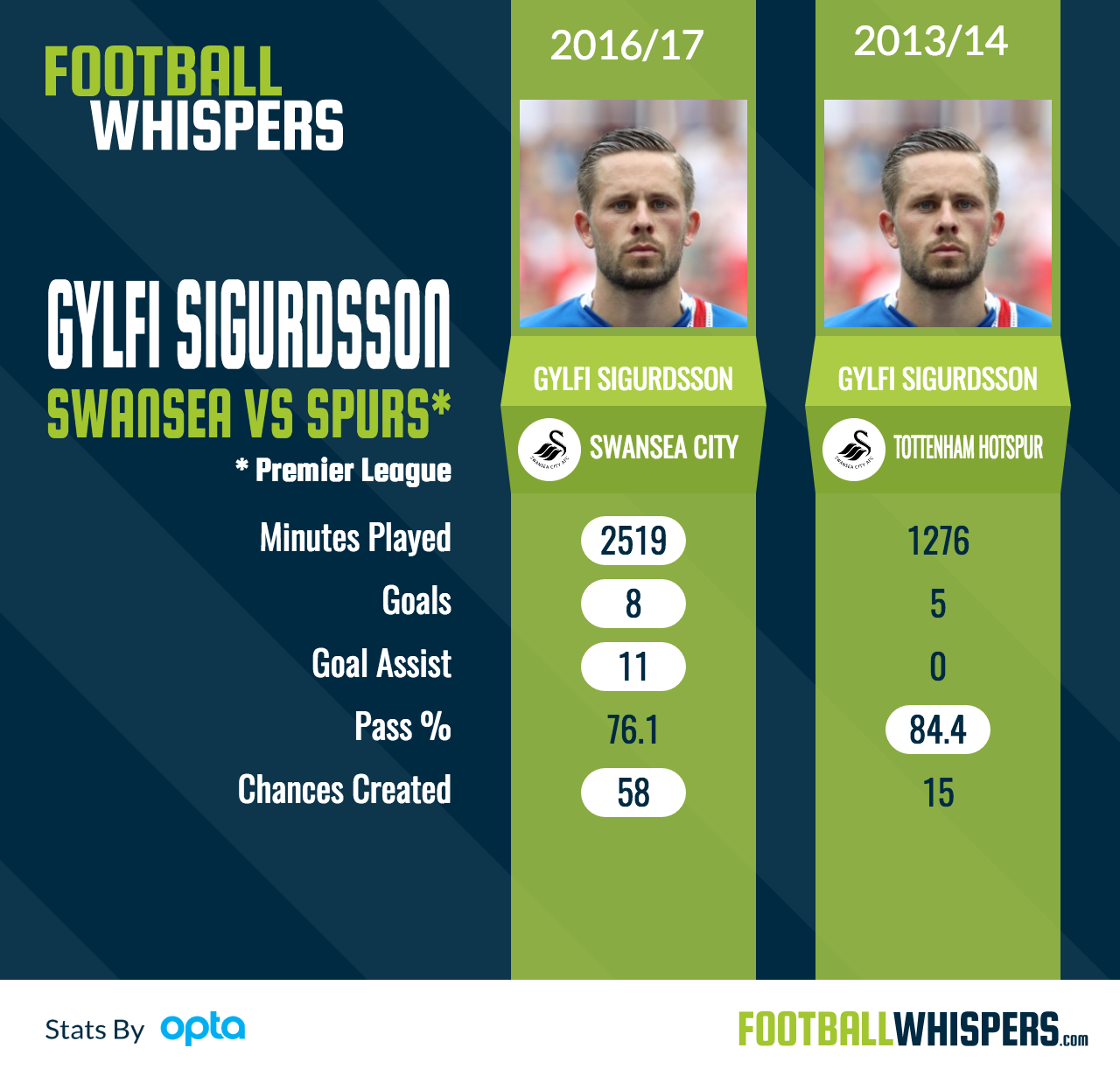 It’s an impressive stat, though in truth the player has never been one to shirk responsibility. Indeed, while he enjoys the freedoms afforded him by Clement in attacking situations, he has always put the team first. This has been seen consistently at international level, where he plays a key role for Iceland, and it has also been seen in his acceptance of a variety of different roles at club level—in the last three years at Swansea, he has been asked to play in attacking midfield, on the left wing and even as a false nine, and he has committed himself to each role.

Few attacking midfielders would be considered all-rounders, but Sigurðsson fits the bill due to his versatility, attitude to defensive work and ability to make things happen going forward. This combination leads many to question why Tottenham, whose pressing game is renowned, ever let him go. Spurs boss Mauricio Pochettino was even moved to comment on the player, saying, “I think after he moved to Swansea and we saw…he was a perfect player for us. But it was a club decision and his decision to move to Swansea and find another way.”

“If anyone asks me…what divides the top players from the not-so-top players? [The answer] is ‘yes they have talent. But they [also] have an unbelievable work ethic,’” the Swansea manager stated.

Thanks in large part to Sigurðsson’s work in all phases, Swansea may well remain a Premier League club going into the 2017-18 season. But by that stage, the Icelander may no longer be their player. As he looks to bounce back to the highest level, Sigurðsson’s next aim must be to ensure that, when he does get there again, he stays there.