Everton have had a strange season. They kicked off the campaign being tipped to be the club to turn the top six into the magnificent seven; the team that was supposed to battle it out with both Manchester clubs, Arsenal, Chelsea, Tottenham Hotspur and Merseyside neighbours Liverpool for a place in next season's Champions League.

However, It quickly became apparent that they were in a battle, but a relegation one, with Ronald Koeman's summer of spending spectacularly backfiring on him.

Sam Allardyce replaced the Dutchman and now the Toffees are in a battle for a seventh-placed finish. Currently in ninth position in the Premier League, Everton are just two points behind Burnley, the team currently sitting just outside of the top six.

Allardyce's men, however, can't just concentrate on looking upwards; they're eight points clear of the drop zone, but if their bad run of form continues – they've picked up 12 points from the last 30 on offer, putting them 12th in the form table with the only five teams having a worse goal difference over this period – they could easily slide down the table if this continues.

What's even more alarming for Everton fans is the fact only Watford and Stoke City have conceded more goals. And, according to Understat.com, only Stoke have a worse expected goals against total.

It means the Toffees aren't unlucky in the defensive third, they've been giving up high quality chances on a regular basis. Allardyce's arrival was supposed to shore things up but they've not kept a clean sheet since boxing day.

Something's got to give and, as cliched as it sounds, sometimes attack is the best form of defence.

Over recent months, the Toffees have offered very little going forward. In the latest episode of Three Minute Myths, the team looked at Everton's summer signings and whether they were underperforming.

The stats revealed that those new signings are suffering due to not being suited to Allardyce's system. 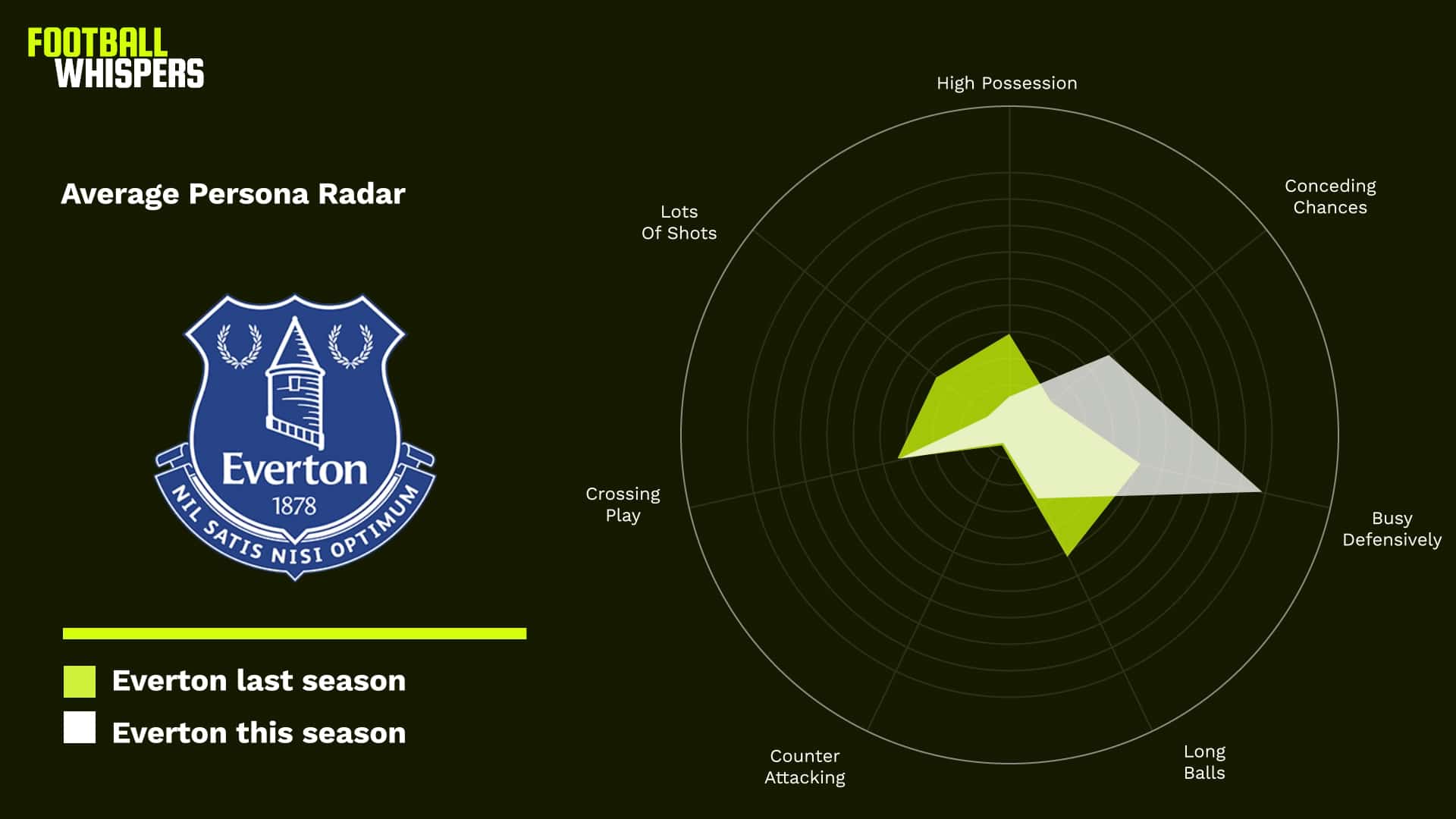 The likes of Gylfi Sigurðsson, Wayne Rooney, Davy Klaassen and Sandro would've arrived to play Koeman's possession-based style. But, as you can see in the graphic above, Everton are now much more of a defensive side.

Allardyce has attacking talent at his disposal but he's failing to get the best out of them. Everton have scored 32 goals this season – the tenth-highest in the Premier League – at a rate of 1.18 goals per 90 minutes.

They've scored seven goals in seven matches since the turn of the year, and that's after they spent the best part of £50million on Cenk Tosun and Theo Walcott during the winter window to bolster their attacking options.

It's just not clicking in the final third, even though they have Rooney and Sigurðsson on the pitch. Allardyce needs to be pragmatic and look at ways to get the best out of these creative players, especially the latter.

Of players with 500 minutes or more for the Toffees in the top flight, Sigurðsson leads the way for xA90 (expected goals assisted) with 0.13 – the 116th best in the Premier League. 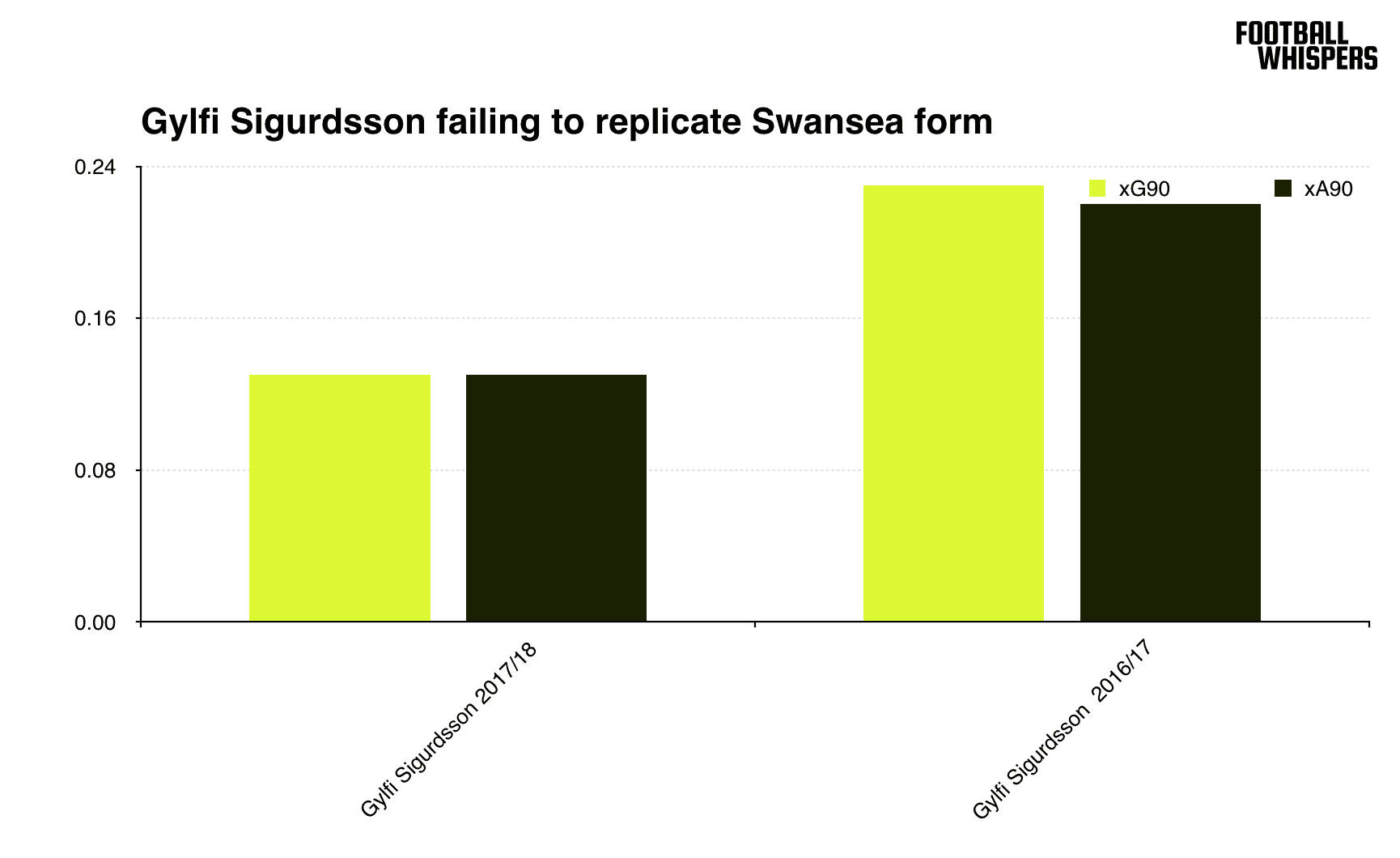 The Iceland International has failed to replicate the form which convinced Everton to part with a club record £45million to bring him to Goodison Park from Swansea City. His xG+xA90 last season was 0.45 and he was involved in a goal every 151 minutes when plying his trade at the Liberty stadium.

Since his move to Merseyside, his xG+xA90 has dropped to 0.26 and he's now directly involved in a goal every 286 minutes. He's gone from creating one xG every four matches while in white, to needing seven matches to repeat that playing in blue. It's an alarming drop-off but context is necessary: Sigurðsson has been played on the left-wing to accommodate Rooney in the No.10 role.

The 32-year-old has rolled back the years since his return to Merseyside and has hit double figures in the league for the first time since 2014/15. But do his goals justify his inclusion as an attacking midfielder? He's got just two assists to his name in the top flight and his xA90 is 0.09. Yes, he's a goal threat, but Everton need someone in the middle to knit things together.

When you look at Sigurðsson's stats from last season you see the difference in the midfielder when he's deployed in a central part of the pitch. His xG+xA90 when used as a No.10 was 0.59 – which would've seen him place in the top 50 this season – compared to the 0.38 when used on the left-hand side.

It's a similar story this season, too: his xG+xA90 as an attacking midfielder is 0.40, compared to the 0.23 when operating on the left. He's much more a threat when playing centrally and it begs the question; why is Allardyce so reluctant to give Sigurðsson the opportunity?

A positive end to the season, and a seventh-placed finish, could hinge on the Everton No.18 being allowed to pull the strings. Sigurðsson could be the man to get Tosun firing; the player to turn the Toffees into an attacking force. But he can't do it from wide areas.