For such an exciting side, Manchester City tend to score pretty boring goals.

Brimming with talent and presided over by the most extraordinary coaching mind of his generation, the Premier League champions have perfected a finish of such glorious tedium, it's like almost like watching someone play their helpless little cousin on FIFA.

They were at it again on Sunday, as Sergio Agüero scored one of the most poachery hat-tricks in recent memory, the Argentine's three goals coming from a combined 12 yards out.

Frustratingly, as dull as it may be compared to a blistering counter-attacking, it's part of City's brilliance. They use width as well as any team in recent memory; Raheem Sterling, Leroy Sané or even Bernardo Silva are all players adept at either drawing full-backs out or making angled runs in behind the opponent's defence.

It's a good thing, then, Guardiola has flooded City's ranks with gifted technicians capable of slicing through banks of four with penetrative passing. Kevin De Bruyne and David Silva are two of English football's most heralded creators, but let's show a little love to İlkay Gündoğan, a bafflingly underrated cog in the Guardiola machine.

Gündoğan's case at City is curious. The German doesn't possess obvious star power like many of his teammates. He hasn't quite established himself like De Bruyne or either of the Silvas and he doesn't carry the tactical nous or defensive mindset to be a long-term heir to Fernandinho.

In spite of this, he continues to perform with distinction, managing somehow at once to be one of the league's finest playmakers yet most overlooked players. 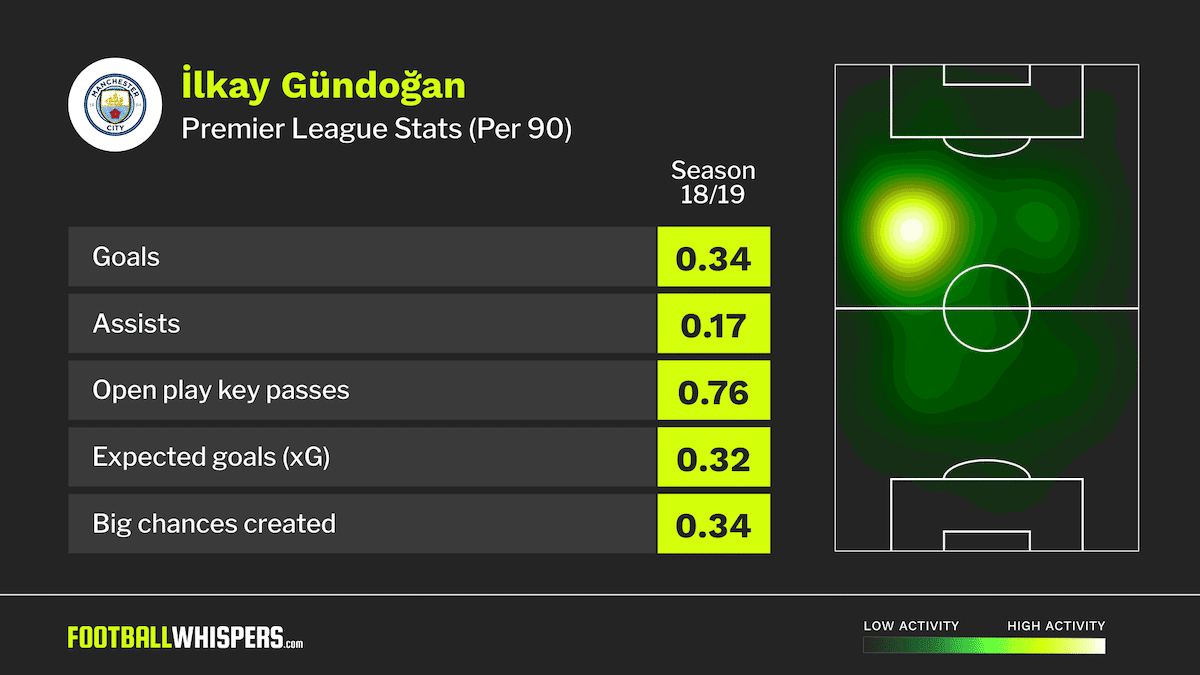 Although he was Guardiola's first signing at City, the 28-year-old was never viewed as the type of player to instantly propel the side to great heights. No, instead – and, while damaged knee ligament robbed him of nine months between December 2016 and September 2017 – he has conducted his duties admirably, flying under the radar but regularly chipping in with important contributions.

This season, the former Borussia Dortmund favourite has scored four goals and seven assists in all competitions. He has often been involved in the key build-up pass, known as ‘pre-assists' in some quarters, too, like for Agüero's second goal against Arsenal on Sunday.

Paul Pogba was rightly lauded for his perfectly lofted pass to tee up Marcus Rashford's winner in Manchester United's win over Southampton just hours before but there didn't seem to be anywhere near as much fuss made about the craft and vision involved in Gündoğan finding Sterling with a similar move to make Agüero's goal possible.

Receiving the pass from Sterling, the German's first-time lob over the Arsenal defence was deliciously deft; a pass that allowed the winger to run onto the ball with breaking stride; a pass that plopped so precisely into the space behind; a pass that effectively swung a crucial game back in City's favour.

And, of course, it was far from anomalous from Gündoğan; over time, he has perfected the art of finding space and of finding runners. His deft touch and positional awareness allow him to slip subtly into pockets of space between the lines and provide a knowing pass that takes an attack up a notch.

Having started seven of City's last ten games, Gündoğan is enjoying a fine run under Guardiola. With Fernandinho successfully performing a half-centre-back-half-defensive-midfield role against Arsenal, it may free up a slot in midfield for the German alongside Silva and De Bruyne.

With just 15 league starts last season, he will feel as though his contribution to City's record-shattering title triumph was minimal compared to others. Now, though, with Liverpool faltering slightly and City in the ascendancy, he has the chance to impact the race for Premier League supremacy.

As one of the good guys, let's hope he takes it.