Despite beating Bayern Munich before the international break, and Hannover 96 last weekend, RB Leipzig are only sitting fifth in the Bundesliga.

It says a lot about Leipzig that their best player this season might be former Liverpool goalkeeper Péter Gulácsi. The Budapest native has had a career-defining year in goal for RB Leipzig, with German publication Kicker ranking him as the best Bundesliga goalkeeper this season.

So good has the 27-year-old's form been that last month ESPN reported he was an Atlético Madrid and Chelsea transfer target to replace Jan Oblak and Thibaut Courtois respectively. 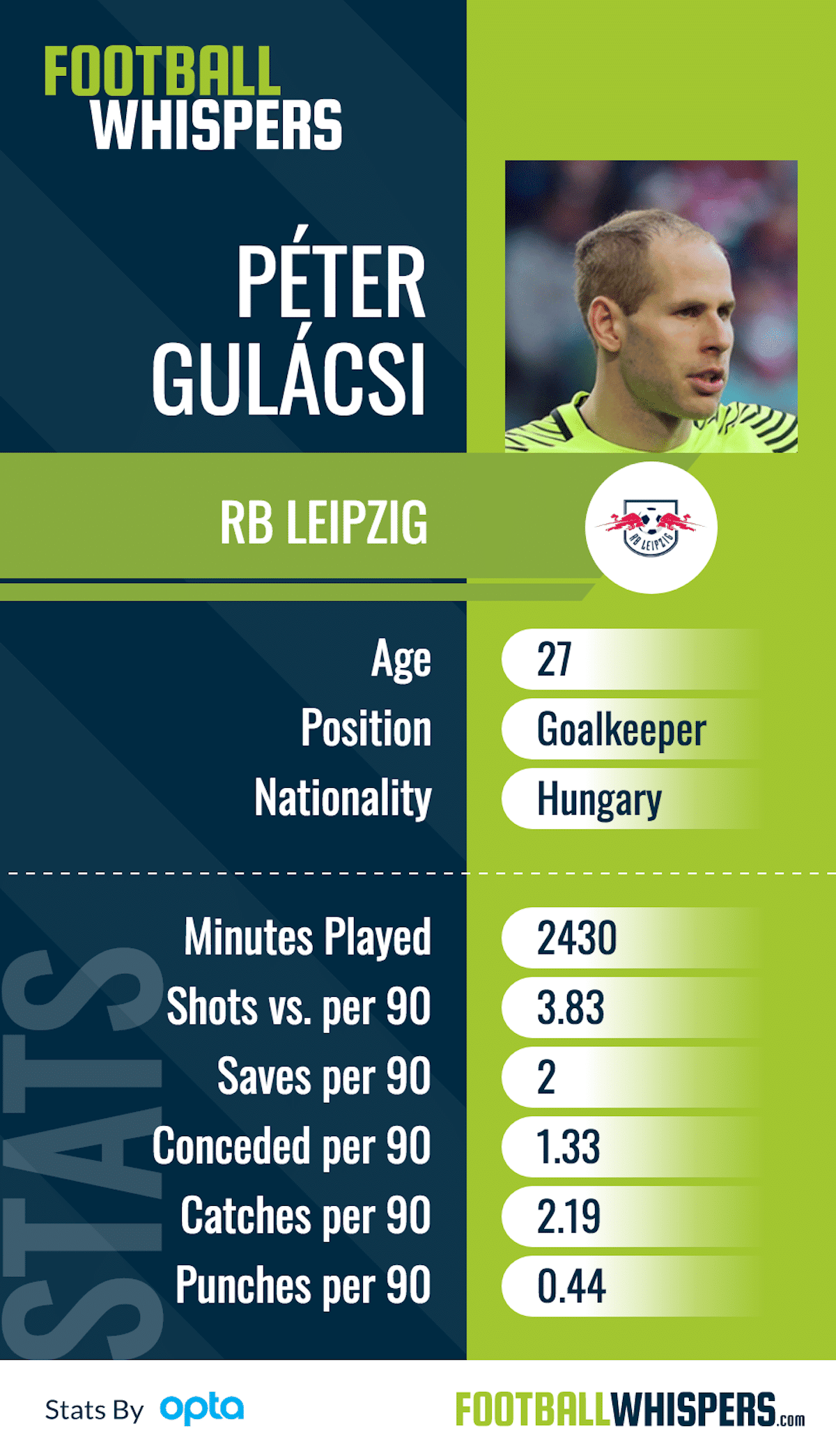 Coming into the 2017/18 season Gulácsi was looking at a make-or-break campaign.  Although Leipzig had stunned the Bundesliga by finishing second as a newly-promoted side the year before, the Hungarian had enjoyed an up-and-down season and was ranked only as the 11th best goalkeeper by Kicker.

Team success at the cost of personal accomplishment has been a familiar theme for Gulácsi. Capped only 16 times by Hungary, he has long been passed over for the 40-year-old Gábor Király, he of Hertha Berlin, Crystal Palace and the famous tracksuit bottoms.

It was a  bittersweet Euro 2016 campaign for Gulácsi. Hungary qualified for the first time in 32 years and advanced from the group stage, but he failed to make an appearance at the tournament.

He is familiar with playing second fiddle. Gulácsi moved to Liverpool at 18, but did not make a senior appearance for the Merseysiders. After loan spells at Hereford United, Tranmere Rovers and Hull City he opted for RB Salzburg in the summer of 2013.

The perception in Hungary was he would simply not cut it at the top level and his career would drift into the lower leagues. Despite the recent Leipzig success story, the narrative of Gulácsi not quite being good enough was in tact as late as the summer of 2017. The signing of  the athletic Swiss keeper Yvon Mvogo for €4.5 million from Young Boys was seen as the end of Gulácsi.

To his credit, Gulácsi has responded with an absolutely fantastic season. He boasts a save percentage of 66.9 having stopped 73 of 109 shots he has faced in the Bundesliga this season. That's a ten per cent improvement on last season.

Those numbers speak of substantial improvement, but it is worth looking at them within the context of Leipzig's disappointing second Bundesliga campaign. RB have not been the same defensively this season, highlighted best by the next two images, courtesy of Scott Willis.

Last season Leipzig allowed a low volume of shots (under ten), but when the opposition got a chance it was very high quality (13 per cent on average). That defensive profile was similar to the high-octane pressing (6.98 passes per defensive action for RB) of Roger Schmidt’s Leverkusen sides (with PPDAs of 5.9 and 5.5).

It stands to reason that in front of an excellent defence Gulácsi looked bad due to the infrequency of his involvement and his mistakes therefore being magnified. 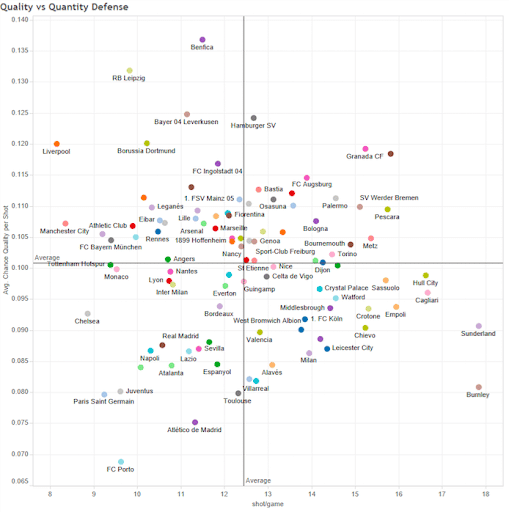 In the 2017/18 season, coach Ralph Hasenhüttl has scaled the press back a little with the number of passes per defensive action rising slightly to 7.32. But Leipzig are allowing 11.45 shots per game vs. 9.8 last season. They allow the same 0.13 xG per shot, meaning that the quality of the chances is equal, but Gulácsi is tested roughly 1.5 times more per game.

The biggest reason behind the defensive drop-off is that Hasenhüttl has had to work around a number of issues in his second season.

Despite the increased load thanks to their Champions League and Europa League involvement, Leipzig have used just 23 players in the league – only Schalke have used fewer with 21 – and five of those players have logged less than 200 minutes. So really it’s been an 18-man squad.

A further problem has been the integration of two extremely talented French centre-backs in 19-year-old Dayot Upamecano and 18-year-old Ibrahima Konaté, who have made a combined 11 mistakes leading to goals. 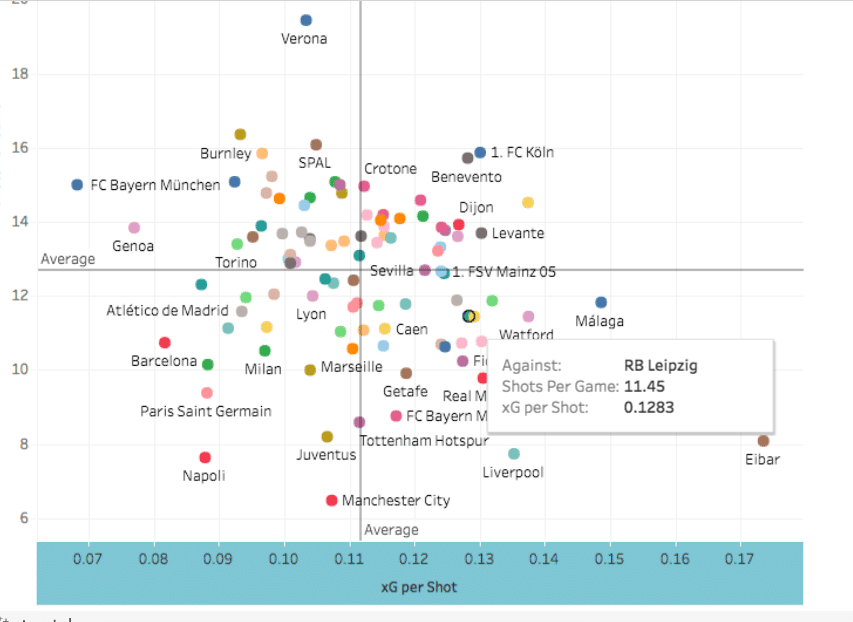 Although the chart is flipped, it is obvious that Leipzig (blue dot) and Huddersfield (yellow dot) town are closer to the average defensive teams, alongside the likes Rennes and Watford, than they are to the elite ones that allow few shots and low xGs per shot like Manchester City, Juventus, Napoli or Paris Saint-Germain.

Although, Gulácsi’s goals against per game and xG allowed per game have gone up from 1.18 to 1.35, he has not been at fault.

Tale of the tape

Gulácsi's primary strengths are threefold. Firstly, and most importantly, he makes key saves at pivotal moments. In the stills below you can see him deny Michy Batshuayi, Mats Hummels and Divock Origi. 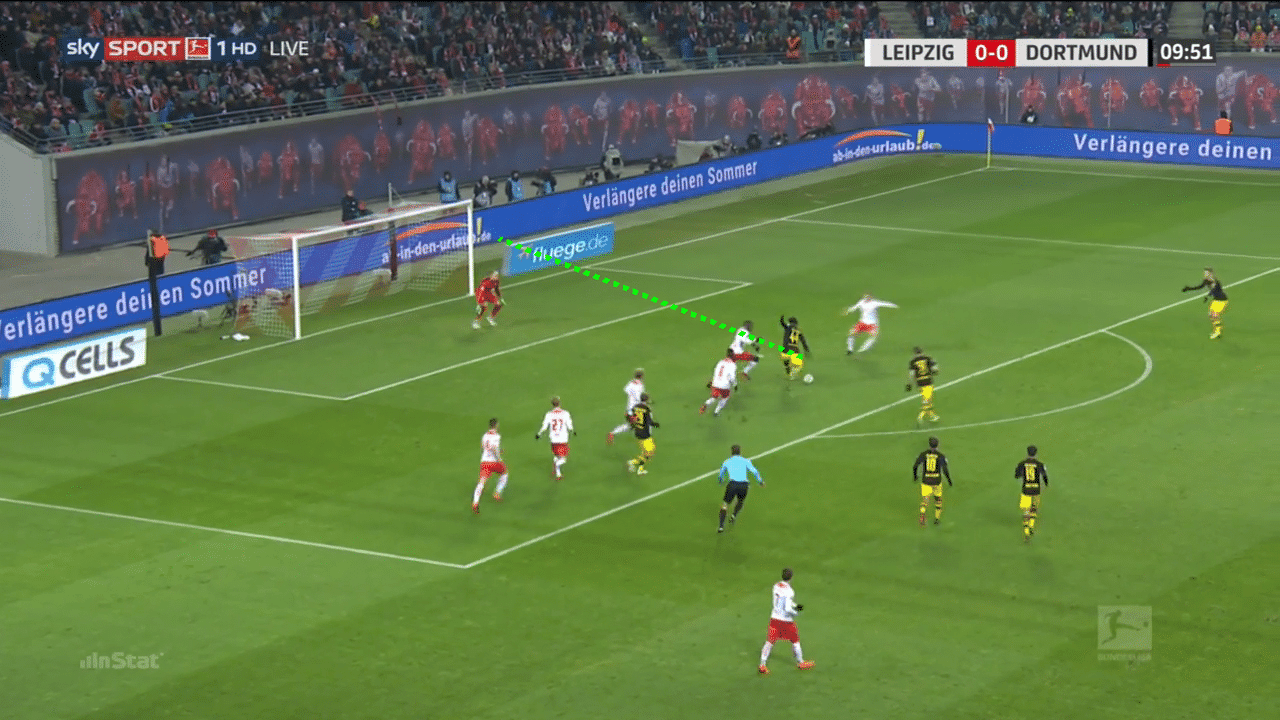 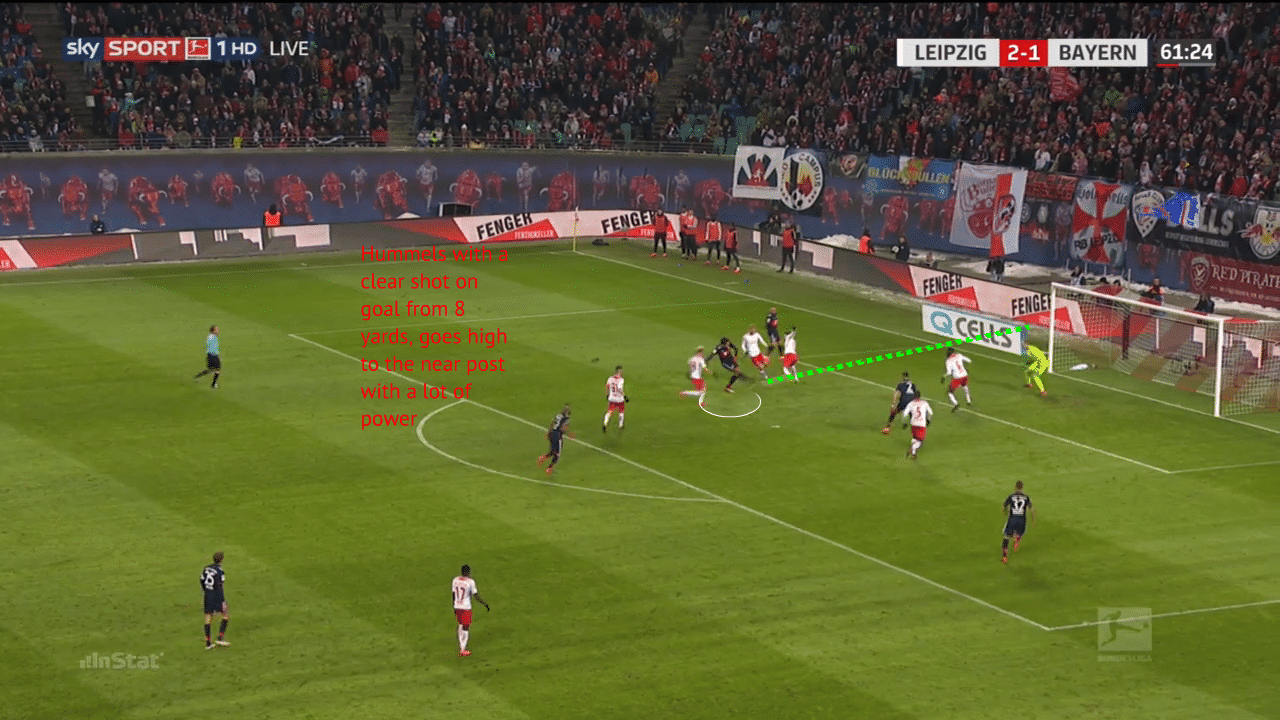 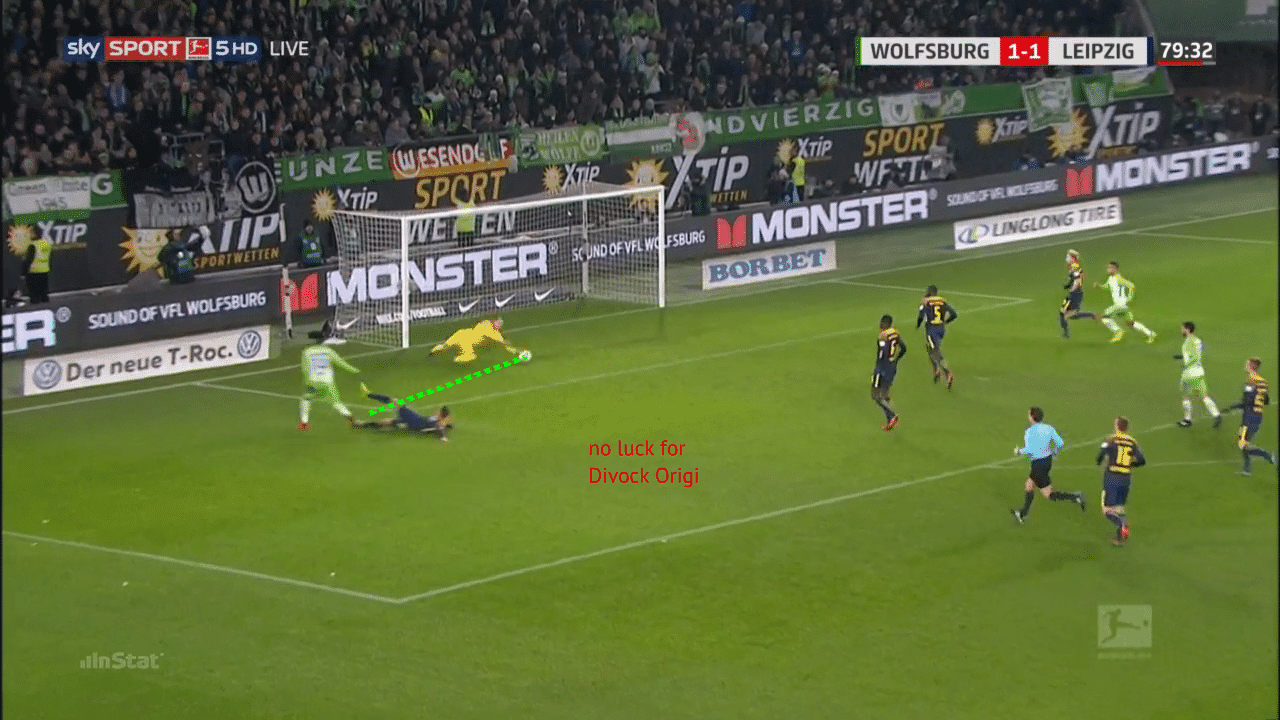 As well as preventing goals against Leipzig, Gulácsi also helps his team start attacks with his impressive distribution. The stills below, taken from a Europa League tie against Napoli, show Gulácsi kick long for Danish forward Yussuf Poulsen. 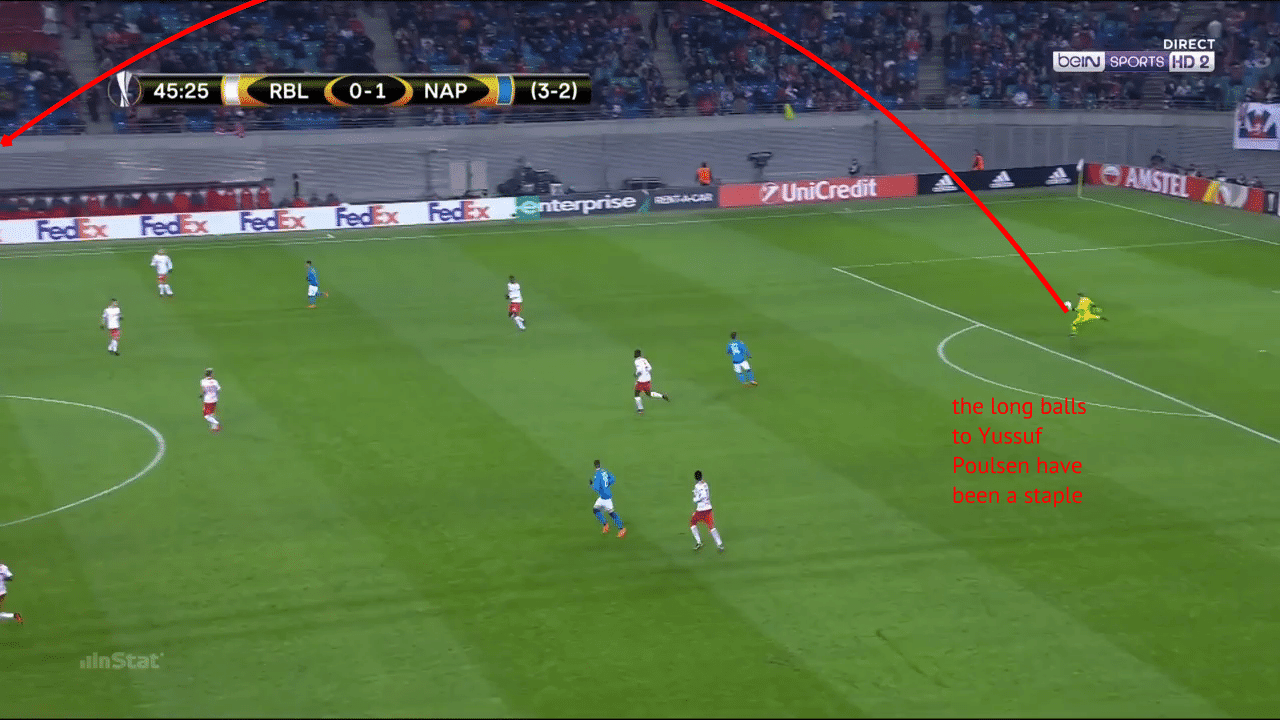 Even if Poulsen isn't able to hold onto the ball, Timo Werner and Sabitzer can feed off the scraps to maintain possession for RB Leipzig. 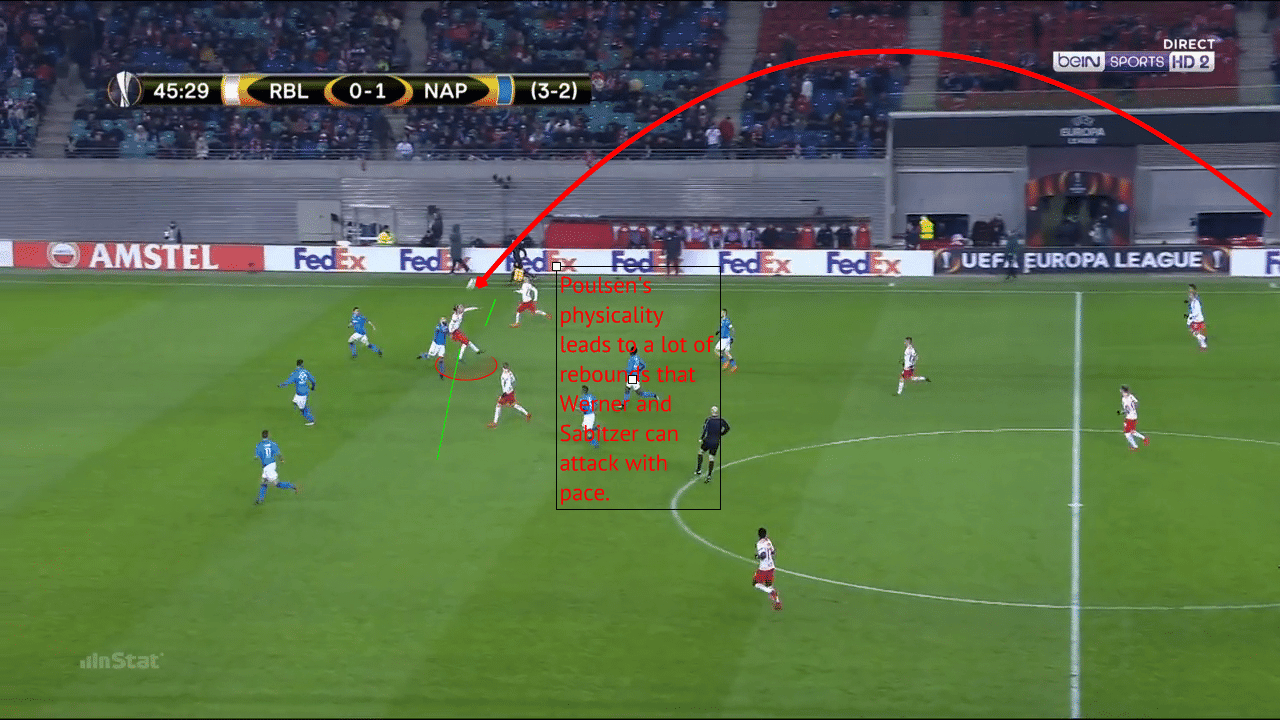 Finally, Gulácsi is surprisingly quick off his line and very decisive. When under pressure he prefers to either get rid of the ball or find the direct pass that can start a deadly counter. It's no coincidence Leipzig led the Bundesliga with 18 counter attacking goals last season and are tied for third with ten this year already.

A late bloomer, Gulácsi has a few areas in which he could improve on. He could be more comfortable on the ball and would benefit from a better first touch. While the Hungarian is great at getting rid of the ball with one touch, he doesn’t always realise how much time he has and that has led to errors in the past.

The worst of which was on international duty with Hungary in October. Having received the ball back from full-back Barnabás Bese he dithers, slips and allows Arsenal‘s Granit Xhaka in to score the first in a 5-2 win.

In the Bundesliga, these poor touches have not had disastrous consequences, but Gulácsi needs to be more careful and work on his perception of how much time he has.

As well as that, his positioning when facing long shots could be improved. In the same game against Switzerland he could only get a weak palm to a fairly tame 25-yard effort by Steven Zuber. 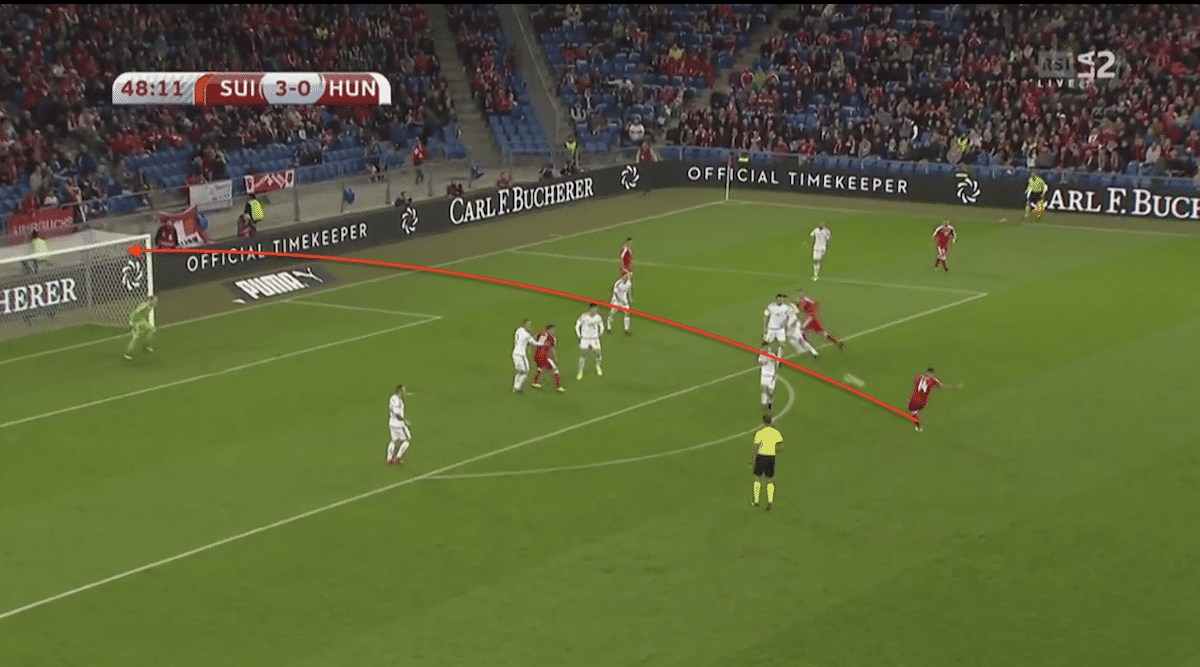 After conceding another effort from range to Borussia Mönchengladbach's Lars Stindl in September Gulácsi was benched in favour of Mvogo. But he failed to impress in a 1-0 loss to Augsburg and that was his only game this season, much to the chagrin of his agents, who considered a winter transfer.

More importantly, Gulácsi has risen to the challenge and, domestically at least, has not made a significant mistake that cost Leipzig a goal since then. Despite a contract extension signed in December to see him through until 2022, interest from Europe's elite teams has not waned.

Due to his fluency in English, his representation being embedded in English football, and qualifying as a homegrown player due to his years at Anfield, a move England makes most sense.

Due to the uncertainty of their goalkeeping situation, Arsenal might be the most logical destination. But don’t count out Manchester United or Chelsea needing to replace David de Gea or Courtois should Real Madrid come knocking.

Should Atlético Madrid fail to hold onto Oblak they could be in the running. Although the recent form of Loris Karius at Liverpool should suggest otherwise, wouldn’t a return to Liverpool be a storybook ending?