It's been an uphill struggle for John Stones since day one but, believe it or not, he's now on the brink of becoming Pep Guardiola's ideal centre-back.

When the Barnsley youth academy graduate burst onto the scene for Everton he was harshly judged for seemingly being more interested in playing football than he was defending.

His £47million move to Manchester City exacerbated things. His every move on the pitch was now meticulously examined under a microscope. Minor defensive errors, ones that all young centre-backs make, were made out to be career-defining moments. Football fans wrote him off before the 2016/17 campaign came to an end.

After all, the Premier League isn't usually the place for youngsters to hone their craft.

The 23-year-old looked much more at home in Guardiola's new look defensive unit at the beginning of the current campaign. But when the Premier League champions were being lauded for the football being played, people still questioned Stones' place in the starting XI. Just waiting to pounce on a mistake.

A combination of injuries, the return to fitness of Vincent Kompany, the arrival of Aymeric Laporte and a horror show against Liverpool in the 4-3 loss in January has resulted in Stones spending a lot of time on the bench in recent weeks. This has led to uncertainty surrounding his future.

Reports had emerged claiming City would look to cash in on the former Everton player this summer. But the Manchester Evening News revealed the club have no intention of selling the England international.

Why would they? His performances this season have shown he's matured as a defender and he's thriving with the responsibility the former Barcelona manager has placed on his shoulders. 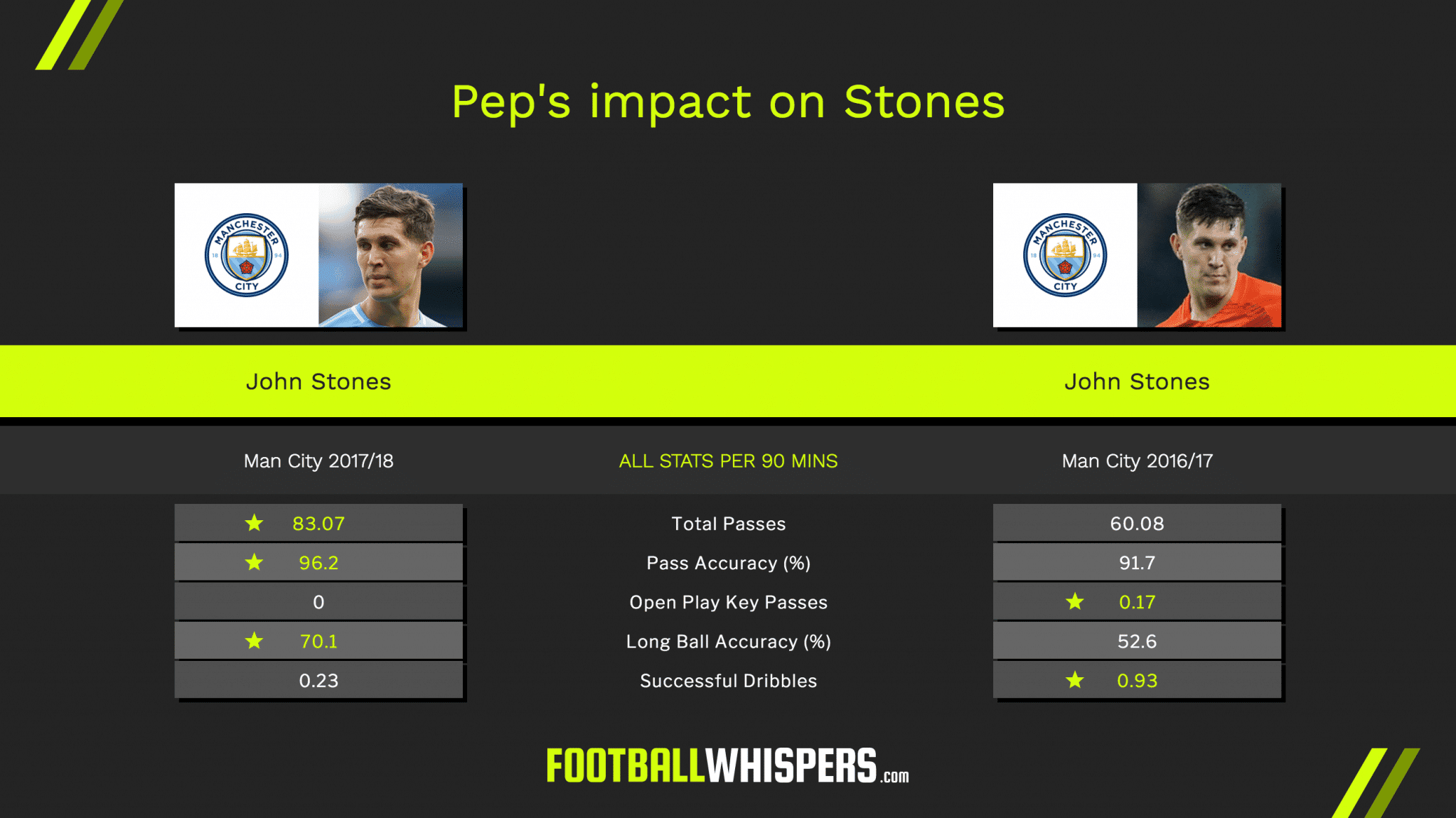 The graphic above compares Stones' first two seasons at the Etihad. The stats listed are to look at how he's performing when in possession because primarily that's what players under Guardiola are judged on.

During his first season in Manchester he was slightly more creative. He played 0.17 more open-play key passes and completed 0.70 more dribbles per 90 minutes. Both of these stats are considered by many to be high-risk and high-reward. But in a team that averages 66 per cent possession, there's less of a need to take chances.

Guardiola's set City up so that they don't have to force the issue and instead relentlessly chip away at the opposition before they inevitably crumble. It's all about retaining possession and keeping the play moving. This starts with the defenders.

The stats show that Stones is ruthlessly efficient when on the ball. He's averaging over 20 more passes this season and his pass accuracy is up by close to five per cent. It doesn't sound like much of a difference but when the volume of attempted passes has increased as well it paints a picture of a player who has bought into the manager's idea.

Stones' long ball accuracy has also improved, from 52.6 per cent to 70.1 per cent. Again, it shows he's better in possession than he was last season. The better he is on the ball, the better suited he is to the City backline.

The Catalan coach has refined the centre-back's style and he's benefitted from it. Fewer dribbles means there are fewer opportunities for the opposition to dispossess him and exploit the space the defender vacated. He's not as exposed now. It was part of his charm but it was also used as a stick to beat him with when things didn't go to plan.

Likewise, fewer open-play key passes per 90 from a centre-back isn't necessarily a bad thing, especially when Kevin de Bruyne and David Silva are in the team. This team aren't reliant on the defenders to create something out of nothing.

By taking him back to basics, Guardiola has moulded Stones into a perfect defender for his dominant side. At 23, there's still much more to come from the Barnsley-born ball-playing centre-back.