Manchester City kept 12 clean sheets throughout the whole of the 2016/17 Premier League campaign in a season which saw them finish third; 15 points behind leaders Chelsea, and eight behind second-placed Tottenham Hotspur.

With the 2017/18 season just seven games old, Pep Guardiola’s side have already kept five clean sheets, and have only conceded two goals so far in the new term.

Although their defensive record wasn’t too bad during the last season, even having the fourth-best defence isn’t good enough when a side has ambitions to win league titles, regardless of how well their attacking unit performs.

A team with anything beyond the third-best defence in the league has only taken the title once in the past ten years — Manchester United conceded 43 goals on their way to becoming champions in 2013, giving them the joint-fifth-best defence.

While City’s attack looks as dominant as ever with a remarkable 22 goals in seven games, the worrying thing for their opponents is that they appear to have sorted out their defensive problems too.

The first thing to note when it comes to the defending in a Guardiola side is that attack is the best form of defence, but not in the traditional meaning of the phrase. Rather than the “you score five; we’ll score six” mentality which is normally associated with this idea, the Catalan manager’s teams defend by keeping the ball.

Quality, not quantity, of chances on goal is important, as is the directness of the passing when in possession. It’s no good a side dominating the ball by passing it around their defenders and midfielders for the whole game, before getting caught on the counter-attack and conceding a goal.

As with any tactic or style, possession teams need a plan which goes beyond just keeping the ball, and Guardiola has the perfect one.

Last season the former Barcelona and Bayern Munich manager didn’t quite have the personnel to transfer his philosophy from training ground theory to match-day practice. The all-important full-backs were ageing; he couldn’t find the right goalkeeper to sit behind his defence; and he was a David Silva or Ilkay Gündoğan injury away from losing control in midfield.

This summer he and the club acted ruthlessly in the transfer market, spending over £120million on full-backs alone and £35million on a Brazilian goalkeeper who was yet to be capped by his national team.

The full-back areas were immediately invigorated, providing the attacking drive which Guardiola desires in this position. Danilo brought versatility, too, and has played in either wing-back position, as a defensive midfielder, and has even been used at centre-back in a back three at City.

The manager also saw the still fairly raw talent and athleticism of 27-year-old Kyle Walker, whom he will be able to mould into his way of thinking. He'll do the same with the slightly more ready-made option on the other side, left-back Benjamin Mendy, once he’s recovered from his unfortunate recent injury.

But one of the big keys to the improvement in the defensive unit has been the introduction of Ederson – the relative unknown who arrived from Portugal for a world-record fee for a goalkeeper.

“But Joe Hart can kick the ball too!” bemaoned the defenders of English football, as Guardiola seemed willing to try anyone from South America above England’s No 1.

In Ederson he appears to have found the answer to his problems, which has silenced the critics of City’s goalkeeping situation, at least for now.

The new man is the ultimate sweeper-keeper, and is probably even more adept at the footballing side of it than Manuel Neuer, Guardiola’s “11th outfield player” at Bayern.

He provides the defence with the assurance that he’ll come out of his area to clear things up, regardless of how high their defensive line is.

He’s already come a cropper due to his style when a foray outside his  18-yard box saw his face connect with the boot of Liverpool forward Sadio Mané, but on his return to the side after a few stitches to his war wound, he’s showing that only his face was dented and not his confidence.

The other bonus for City is that they’ve been able to develop a centre-back partnership in the form of John Stones and Nicolás Otamendi.

Another injury to Vincent Kompany has meant the pair are always playing alongside other, whether this be in a back three or a back four, and they’ve developed an understanding when it comes to their defensive line and what to do when the other breaks from this line to challenge for the ball.

They are assisted ably by defensive midfielder Fernandinho, and the other evolutions within the side mean they now nearly always able to make a confident pass out of defence.

They defend as a team, can press as well as a peak Jürgen Klopp side when they want to, and they all chip in to help recover the ball. To demonstrate this, the best tackle of the game against Chelsea came from striker Gabriel Jesus.

The image below, from Squawka, shows the nine tackle attempts made by the front three of Jesus, Raheem Sterling, and Leroy Sané throughout the game. 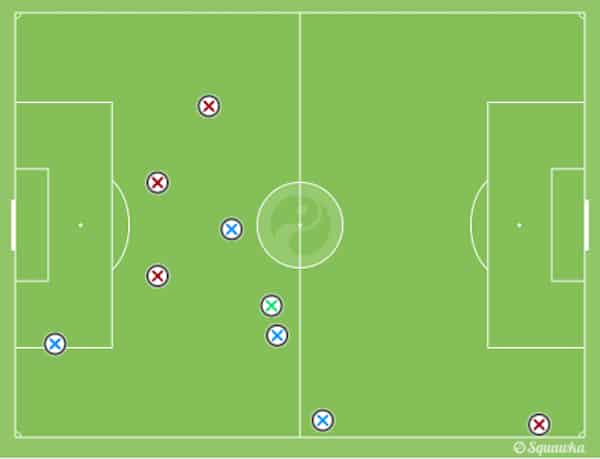 To solve the midfield control aspect of his defence-by-possession system, Guardiola signed Bernardo Silva from Monaco for £43million with the transfer window barely open. He has also casually converted De Bruyne into the best central midfielder in the league.

Bernardo Silva has spent much of his time on the bench so far, while namesake David and his Belgian partner do most of the game controlling in the central and attacking areas. The new Portuguese signing will be called upon at some point, though, as will the returning Gündoğan.

This summer Guardiola had one thing he needed to fix. Early signs suggest that a combination of bold transfers, some positional tinkering, and a system which suits goalkeeper and defenders alike, has done the job.