Guangzhou take on Shanghai Port in the Chinese Super League points on Friday, July 8th. Can Port continue their ascent with a victory over struggling Guangzhou? Read our free predictions and find the latest odds for the fixture below in our detailed match preview.

Shanghai Port have lost only one of their last six matches ahead of their clash with Guangzhou on Friday. Read our top three predictions for this week’s fixture below.

With just one defeat in their last six matches and four victories posted along the way, Shanghai Port are on the up in the Super League and another win looks possible on Friday against a Guangzhou side that have lost seven out of eight assignments this term. The strugglers have notched in four straight matches however, and a consolation could be in the offing. With that considered, bettors are advised to combine a Port win with BTTS this week.

For punters on the lookout for a meatier price this week, a stake on Port to win 2-1 in the correct score market might suffice. That was the final scoreline in each of Guangzhou’s last three Super League tests and defeats, while each of Shanghai’s last two victories in the division were achieved through 2-1 wins where margins were slim. Though patterns and stats are on our side here, aim for a small stake for this big price.

Top Betting Odds and Stats for Guangzhou vs Shanghai Port

Read our selection of the best stats for Friday’s match below alongside a tool to help you choose the best odds.

Read all of the latest team news and injury updates for Friday’s Super League skirmish between Guangzhou and Shanghai Port below.

Jiang Guangtai and Asqer Afrden both played in Guangzhou's loss to Wuhan Yangtze last time out and with that pair back fit and firing, the treatment room at the club is empty. Only city rivals Guangzhou City have collected fewer points than FC so far this term.

Aaron Mooy and Ablahan Haliq are still out for Shanghai Port, while Xu Xin and Wei Zhen are considered doubtful. Port overcame Hebei 2-1 in their last match and moved up to seventh place in the Super League in the process. 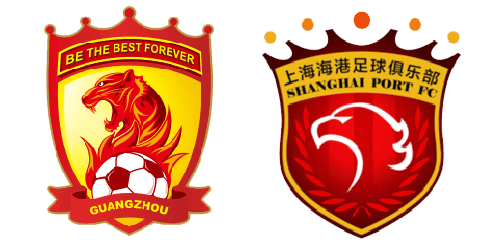 Shanghai Port beat Guangzhou 1-0 when the teams met last met a month ago.