There might not have been any games played in group J as yet but there is no denying who the best sides are. Which one of them will get their AFC Champions League campaign started with a win? Find out with our Guangzhou vs Cerezo Osaka match preview with free tips, predictions and odds mentioned along the way.

Cerezo Osaka to suffer another loss

Cerezo Osaka definitely have something about them hence their place in this tournament after qualifying via the J League. Recently though, they're not offering up anything like the best of what they have to offer and that's why we're making the prediction that they lose. Guangzhou aren't exactly in sparkling form themselves but two wins in their last two will have them buoyed coming into this match; Cerezo Osaka can only serve up the same two wins from their last 10 outings – they've both been at home as well.

It's hard to imagine this match being loaded with goals. It's quite natural for the early games in these big competitions to be a little bit cagey. On top of that, neither side have much in their recent form that suggest this will unfold differently. Guangzhou have seen their last three matches all end under the 2.5 mark with four of their last five also coming in south of three goals. Cerezo Osaka's form can be painted in the exact same way; their last three have seen a maximum of two goals with just one of five seeing over 2.5.

A win and strong defensive showing from Guangzhou

Our final tip is, in part, a combination of the first two; we have made the prediction that Guangzhou win the match and also backed the fixture to come up short in the goal scoring department. Guangzhou have recorded four clean sheets in their last 10 with two of them coming in their last two matches – that's back to back wins ‘to nil'. Cerezo Osaka meanwhile have failed to score in three of their last five away from home; they've lost all of them.

Guangzhou vs Cerezo Osaka: Find all the best betting odds

When you're not in fantastic form sometimes a change of competition can help the players refocus. When, however, you're facing the strongest team in the group in the opening fixture we're not sure that applies; it's what Cerezo Osaka face here though. Guangzhou aren't banging in goals for fun in recent matches but they will have the lion's share of the ball in this match; with the likes of Talisca, Elkeson, Fernandinho and Ricardo Goulart in their team they can be dangerous when they click. If the hosts are at it, Cerezo Osaka will need to be 100% on their game to leave with anything. It will likely be a tough 90 minutes for keeper Van Lam Dang and co. 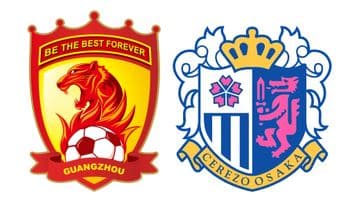