Guangzhou FC and Wuhan Yangtze face off in the Chinese Super League on Saturday, June 11th. Wuhan Yangtze are targeting their third straight victory this weekend. Read our free predictions and find the latest odds for the fixture below in our detailed match preview.

Can Guangzhou FC avoid a third defeat on the bounce when they take on Wuhan Yangtze in the Super League on Saturday? Read our top three predictions for this weekend’s fixture below.

Guangzhou FC have started the new Super League campaign miserably, suffering back-to-back defeats while shipping seven goals in two dreadful opening fixtures. In contrast, Wuhan Yangtze managed to claim maximum points from their first two tests and with early momentum on their side, they could extend their perfect start at their host’s expense on Saturday.

Guangzhou FC are still trying to break their duck for the new season and having gone 180 minutes without a goal, bettors shouldn’t expect them to cut loose on Saturday. Wuhan Yangtze won their first two matches, though margins were slim in both and the visitors notched just three times overall. The early evidence suggests a low-scoring contest is in the offing this weekend, so back under 2.5 goals to hit the net.

Check out our list of the best stats for Saturday’s match below alongside a tool to help you choose the best odds.

Below, you can find all of the latest team news and injury updates for Guangzhou FC’s tussle with Wuhan Yangtze in the Chinese Super League on Saturday.

Guangzhou FC were battered 6-0 by Wuhan Three Towns last time out and to compound their misery, they lost key defender Wu Shaocong to a second half-red card and will be without him this weekend through suspension. Li Yang and Yany Liyu were hauled off at half time in that rout and they are unlikely to start on Saturday.

Felicio Brown Forbes was Wuhan Yangtze's match-winning hero on Tuesday when he scored both goals in a 2-1 win over Hebei FC. That was the club's second win in as many games and changes to their XI are unlikely this weekend as they bid to prolong their excellent start. 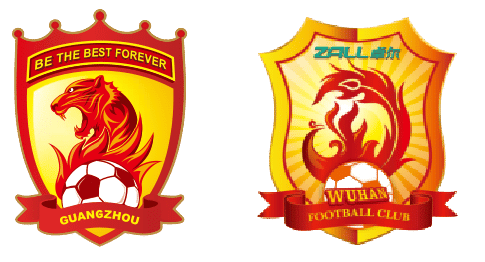 Who is Guangzhou FC’s manager?

Liu Zhiyu is in charge at Guangzhou FC having taken the reins in December 2021.

The Tianhe Stadium will host Guangzhou FC vs Wuhan Yangtze on Saturday.