Wuhan Three Towns have claimed 16 points from the first 18 on offer in the Super League ahead of their clash with Guangzhou FC. Read our top three predictions for this week’s fixture below.

Wuhan Three Towns continue to blaze a trail through the Super League since their promotion and among their five victories in six games was a thumping 6-0 win over Guangzhou FC back in the first week of June. The league leaders should be comfortable winners again in Thursday’s rematch, though it’s worth noting that four of their six efforts earlier this month were notched after the interval and patience could be required again this week. With that in mind, back the second half to see more action than the first.

Wuhan Three Towns’ 6-0 demolition job on struggling Guangzhou FC was their biggest win of the campaign so far and they look ready to tear the same defence to shreds on Thursday. Three Towns warmed up for this week’s test by putting five past a shellshocked Hebei on Sunday and they have the firepower to match that result against Guangzhou. As a consequence, a stake on the table toppers in the over 2.5 team goals market is worth considering.

Read our selection of the best stats for Thursday’s fixture below alongside a tool to help you choose the best odds.

You can view all of the latest team news and injury info for Guangzhou FC vs Wuhan Three Towns in the Super League on Thursday below.

Asqer Afrden should be available again for Guangzhou FC having sat out Sunday's 2-1 reverse at Shanghai Shenhua. That was the club's fifth defeat in six matches since the start of the campaign. There are few injuries for Head Coach Liu Zhiyu to worry about this week.

Defender Gao Zhunyi is listed as Wuhan Three Towns' only injured player this week and Head Coach Pedro Morilla has a strong squad to choose from ahead of Thursday's game. Wallace was named on the bench in Sunday's 5-0 win over Hebei and the Brazilian defender will hope to return here. 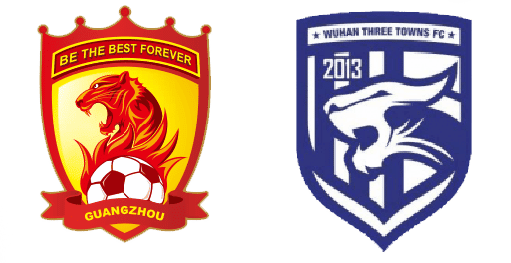 Which club is favourite to win on Thursday?

The bookmakers have made Wuhan Three Towns odds on favourites to win this week.