Guangzhou FC and Hebei clash in the Chinese Super League on Sunday, June 19th. Two of the division’s bottom three face off at the Jinzhou Stadium. Read our free predictions and find the latest odds for the fixture below in our detailed match preview.

Both Guangzhou FC and Hebei have lost 100% of their Super League fixtures ahead of their tussle on Sunday. Read our top three predictions for this weekend’s fixture below.

Both Guangzhou FC and Hebei have endured rotten starts to the new campaign in China, losing each of their first four fixtures respectively and with confidence rock bottom in both camps, a stalemate looks possible when the two underperformers meet on Sunday. Neither side has the quality or self-belief to push for victory this weekend and we’re tipping the spoils to be shared as a result.

With just two goals notched between them in eight Super League assignments so far, Guangzhou FC and Hebei have been alarmingly short on cutting edge this term and a low-key contest is anticipated when they face off on Sunday as a consequence. Just a single goal hit the net in three of Guangzhou FC’s first four matches on the new season and we recommend backing under 2.5 goals to be registered again here.

Top Betting Odds and Stats for Guangzhou FC vs Hebei

Check out our selection of some of the best stats for Sunday’s match below alongside a tool to help you choose the best odds.

Below, you can find all of the latest team news and injury updates for Guangzhou FC’s Super League skirmish with Hebei on Sunday.

Guangzhou FC fell to their third 1-0 defeat of the campaign on Wednesday when they were edged out by Shanghai Port. Manager Liu Zhiyu reported no fresh injury concerns after that loss, so expect to see the same players take the field in Sunday's latest test.

Hebei limped to a 3-1 reverse at home to Shanghai Shenhua on Thursday to prolong their losing streak. Liao Wei and Yang Chenyu were withdrawn at half time in that contest and both players could lose their place in the starting XI on Sunday. 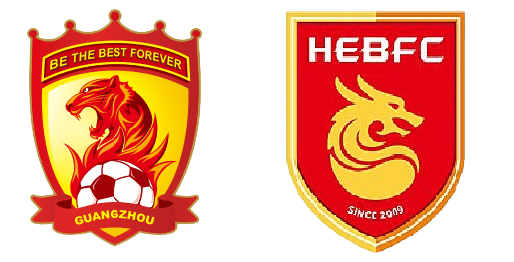 Who is Guangzhou FC’s manager?

Kim Jong-Boo is Guangzhou FC’s manager having joined the club a year ago.

Guangzhou FC vs Hebei will be played at the Jinzhou Stadium this weekend.