Watford and Crystal Palace have built something of a rivalry up in recent times, largely since the Eagles pipped the Hornets to promotion and an FA Cup final in the space of three years, and the Eagles have come out on top once more, with Getafe goalkeeper Vicente Guaita the prize.

The 31-year-old was a Watford and Crystal Palace transfer target during the January window. According to respected Spanish journalist Guillem Balague both clubs met Getafe's £3.5million asking price but Guaita favoured a move to Selhurst Park.

However, with the Madrid-based side needing a replacement the deal was not completed before Wednesday's 11pm cut-off. Now, according to Balague once more, the Eagles have agreed a pre-contract with Guaita who will move to South London in the summer.

Palace boss Roy Hodgson would certainly like the Spaniard to replace Wayne Hennessey between the sticks at Selhurst Park.

“It's a player we like and we're still pursuing,” he told the Croydon Advertiser before Wednesday's deadline. “It would be nice if he can come here in the January transfer window, it's someone the chairman and Dougie [Freedman] are working hard on.”

Who is Vicente Guaita?

Born in the Valencian city of Torrent, Guaita joined Los Che as a youngster and looked set to become the club's No.1 when he broke into the first-team squad ahead of the 2008/09 campaign.

His cause was helped by the retirement of club captain and icon Santiago Cañizares but, even with the peroxide-blonde stopper out of the way, Guaita faced stiff competition from César Sánchez and Renan and remained third-choice at the Mestalla, making just two appearances that season.

He spent the 2009/10 campaign on loan at second-tier side Recreativo Huelva and played 30 times in the Segunda División, helping the Andaluscian outfit finish mid-table while conceding just 24 times to clinch the Ricardo Zamora trophy for most clean sheets.

Guaita returned to Valencia the following season and with César and Miguel Ángel Moyà ahead of him had to wait patiently. But his chance came when injuries to both saw him pitched into the starting XI for a 2-1 home win over Almería. Guaita kept his place for a Champions League draw against Manchester United and continued to impress.

But as soon things were looking up for Guaita his world was rocked by the death of his father, aged just 46, following a heart attack. César was brought back into the side to give the grieving youngster a break.

Guaita started the 2011/12 campaign as No.1 for Los Che but was forced to give up his spot once more when a serious hand injury sidelined him in November 2011. That marked the beginning of the end of his Valencia career.

The arrival of the impressive Diego Alves meant opportunities were limited and, in 2014, he moved to Getafe in search of first-team football.

What are Vicente Guaita's main strengths?

Guaita is a good shot stopper with his agility, reflexes and positioning all strengths. In the stills below, taken from Getafe's loss against Girona in December, he demonstrates all of those qualities to keep out this effort.

The ball in from the right is delivered into the dangerous corridor between the keeper and the defenders and Guaita positions himself low, ready to spring. As the ball is flashed across the face of goal the temptation might be to follow it. But he actually moves back towards the near post where the cross has come from, anticipating the direction of the header. 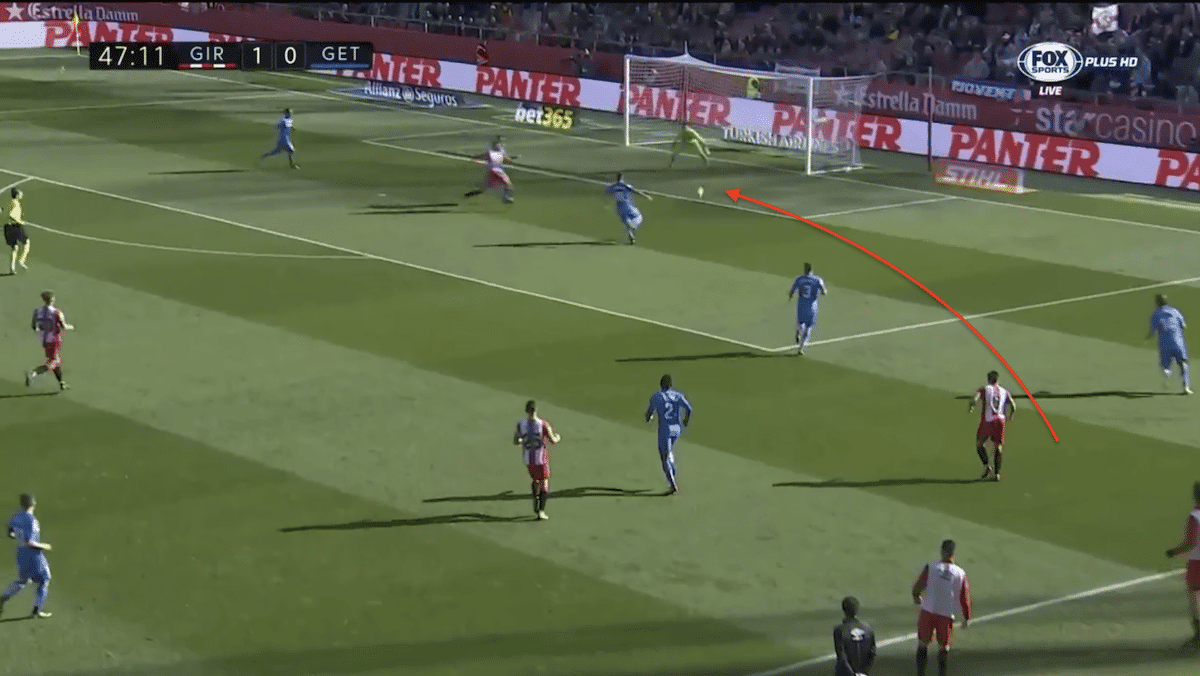 Sure enough the header is directed back into the near post. Having kept himself low Guaita is able to spring to his left and smother the header, which looked bound for the bottom corner, and keep his side in the game. 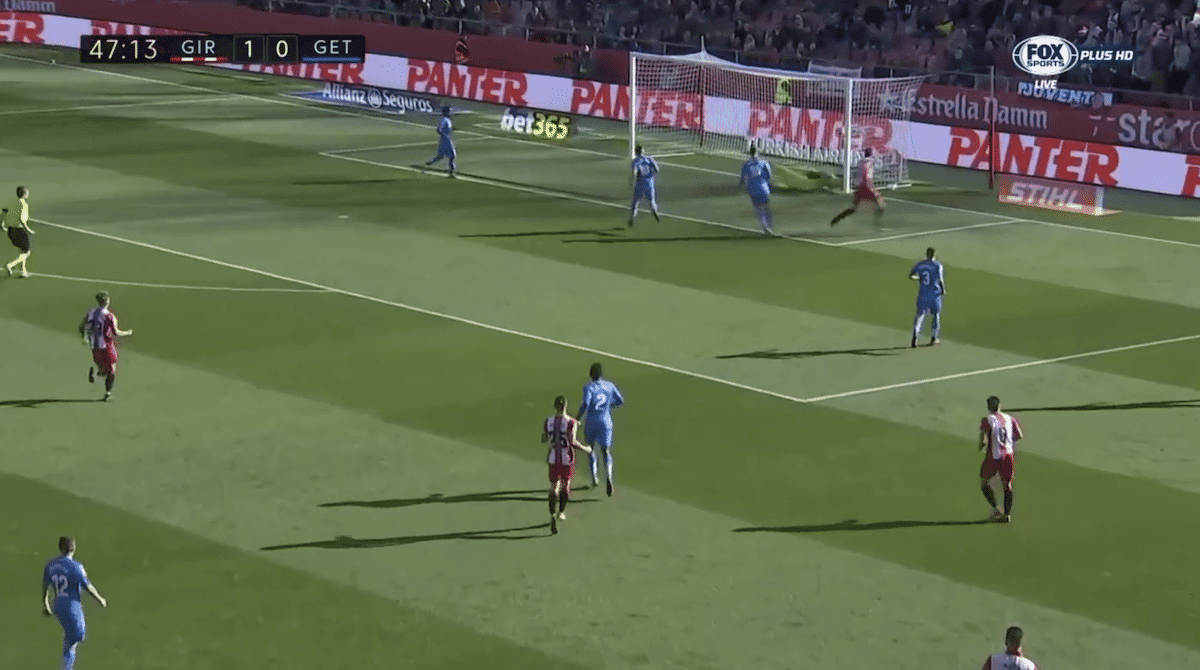 His reactions are very sharp and his save percentage of 70 per cent this season underlines his ability as a shot stopper.

What are Vicente Guaita's main weaknesses?

The two black marks against Guaita are two common flaws in goalkeepers. Firstly, he is not the best from crosses. In the example below, taken from Getafe's draw against Real Betis in November, Guaita waits a long time – almost half the time it takes for the ball to arrive in the middle – to decide to start leaving his line. 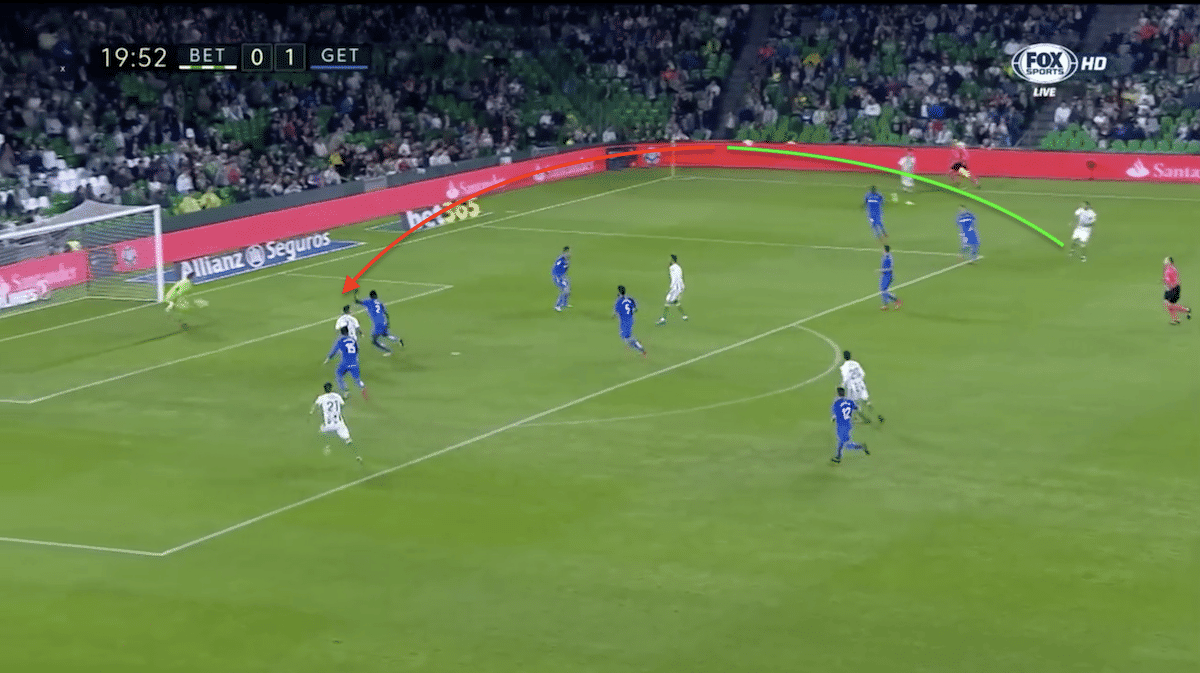 Despite that he gets to the ball first. But clearly he doesn't expect to and punches clear, unconvincingly, when under minimal pressure from the Real Betis forward. 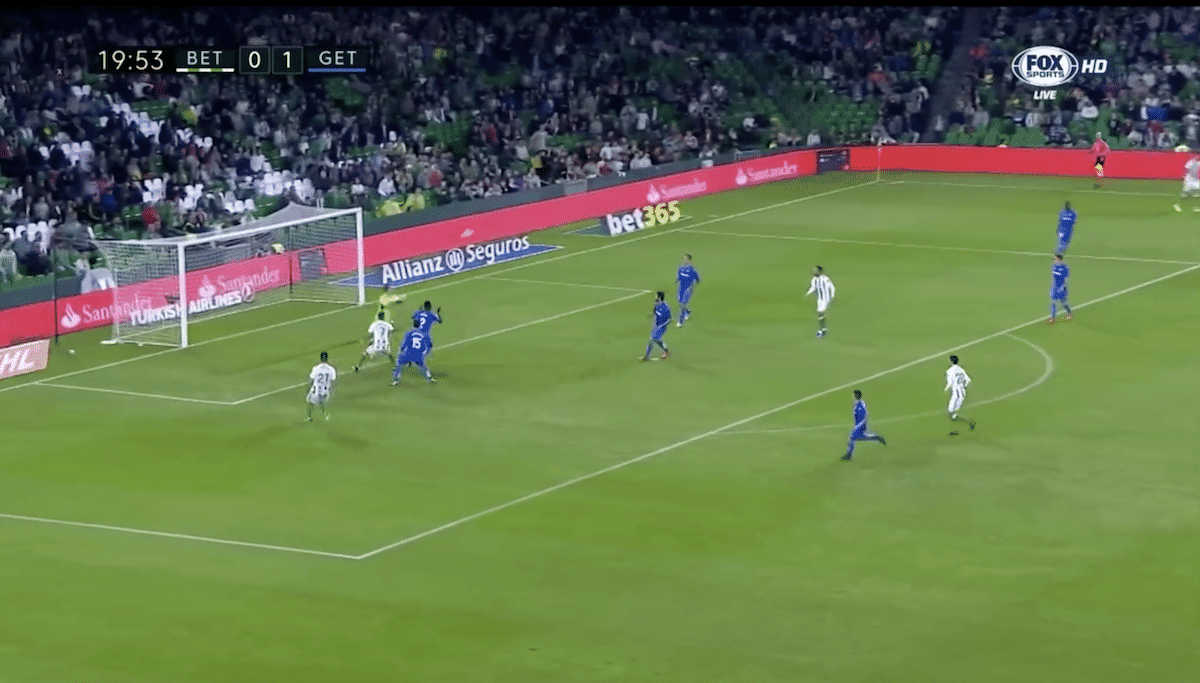 Guaita has a tendency to punch and while a decisive punch is better than an unconvincing attempt the catch the ball, it can also put unnecessary pressure on the defenders in front of the goalkeeper, too.  That is reflected in the number of punches Guaita has made in 18 La Liga outings – 11, the most in the division.

His other weakness is his distribution. Guaita has completed just 45 per cent of his passes in La Liga this season which is the second-worst record of any La Liga keeper to have played at least ten fixtures. 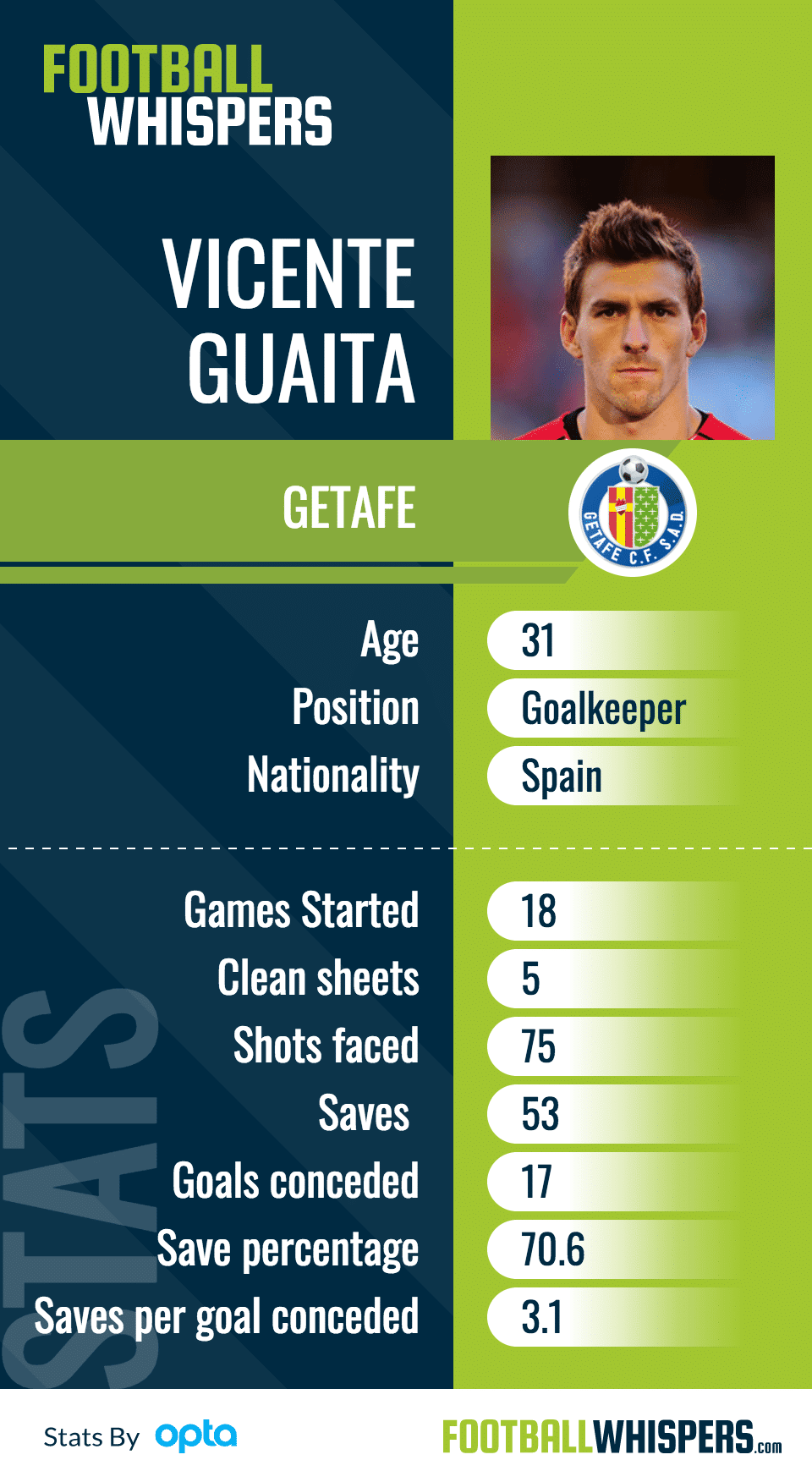 How much would Vicente Guaita cost?

Guaita has an €8million release clause written into his contract but after failing to strike a deal last month, Getafe will now lose their No.1 for nothing in the summer.

Palace offered €3.5million originally but Getafe wanted the Premier League side to meet the keeper's release clause. Not prepared to do that, the Eagles have agreed a pre-contract with Guaita which has left his current club accusing Palace of ‘trying to pull their trousers down' according to The Independent.

Hodgson ditched the underwhelming Hennessey and reinstated fans' favourite Speroni after just two Premier League fixtures. The change coincided with Palace's first win of the season but the Welshman has started Palace's last six and appears to be the club's No.1 for now.

At 38, Speroni was only ever going to be a stop-gap, while Hennessey had been unconvincing as a Premier League No.1 long before Hodgson arrived in South London. It is little surprise, therefore, that the former England manager has made a new goalkeeper one of his priorities.

Guaita is not perfect. But he is still a significant upgrade on both of Palace's current options between the sticks and Hodgson has made a new No.1 his No.1 priority for that reason.