“I've been at Hertha for 22 years,” said Hertha BSC manager Pál Dárdai in December. “This isn't meant as an insult to anyone else, but Marko is by far the best midfielder I've seen in my time at the club.”

Hertha’s Hungarian coach was speaking after his side’s 1-0 win over Eintracht Frankfurt in the Bundesliga, and his praise was reserved for Liverpool’s on-loan midfielder Marko Grujic. The 23-year-old had scored the winning goal, powering a header home from a corner, and had been at the centre of everything: he won 54 per cent of his defensive duels and completed 92 per cent of his passes.

This was just one of many impressive performances that Grujic has put in for Hertha this season. The young midfielder, who has been a Liverpool player since 2016 but made just eight Premier League appearances, has been remarkably consistent in the Bundesliga.

Grujic had a brief loan spell in the Championship with Cardiff last season but has made the step up to the German top flight look insignificant. A powerful, rangy midfielder with an eye for a pass and the ability to drive forward from deep, the Serbian international has proven himself capable of performing at the top level.

Grujic has four goals to his name in 19 league appearances this season, but it is his defensive contributions that have caught the eye. The former Red Star Belgrade man has won an average of 3.66 aerial duels and 8.19 defensive duels per 90 minutes. He has not been afraid to shoot, either, averaging 2.23 scoring attempts per 90, second only to striker Vedad Ibišević.

“I was a defensive midfielder and managed to score 17 goals, which isn't bad,” Dárdai said. “But Marko carries much more of a goal threat, he's got a sensational shot on him and is much better than I was. He can play anywhere in midfield.

“He's got so much potential, and you can see that out on the pitch. He's so robust in the middle of the park, but he can still play. He's good in the air, he wins tackles and has got such a strong desire to win. I can only say: ‘respect'.”

Dárdai, then, is clearly a fan, and it is easy to see why. Grujic does the unglamorous work, covering ground in midfield and recycling the ball for his more advanced teammates. He does it efficiently, too. It is no coincidence that Hertha have accumulated an average of 1.6 points per game with Grujic in the starting XI, and just 0.7 without him.

Hertha’s productivity both defensively and offensively improves with Grujic in the team, too: they have scored 1.7 goals per game and conceded 1.4 per game when he has been on the pitch. Without him, their goals scored per game drops to 1.1, and their goals conceded rises to 2.0.

Grujic has made a tangible impact at Hertha, who currently sit 11th in the Bundesliga standings. Despite a poor run of form of late, the on-loan Liverpool midfielder has continued to impress. And his performance levels will not have gone unnoticed by his parent club. 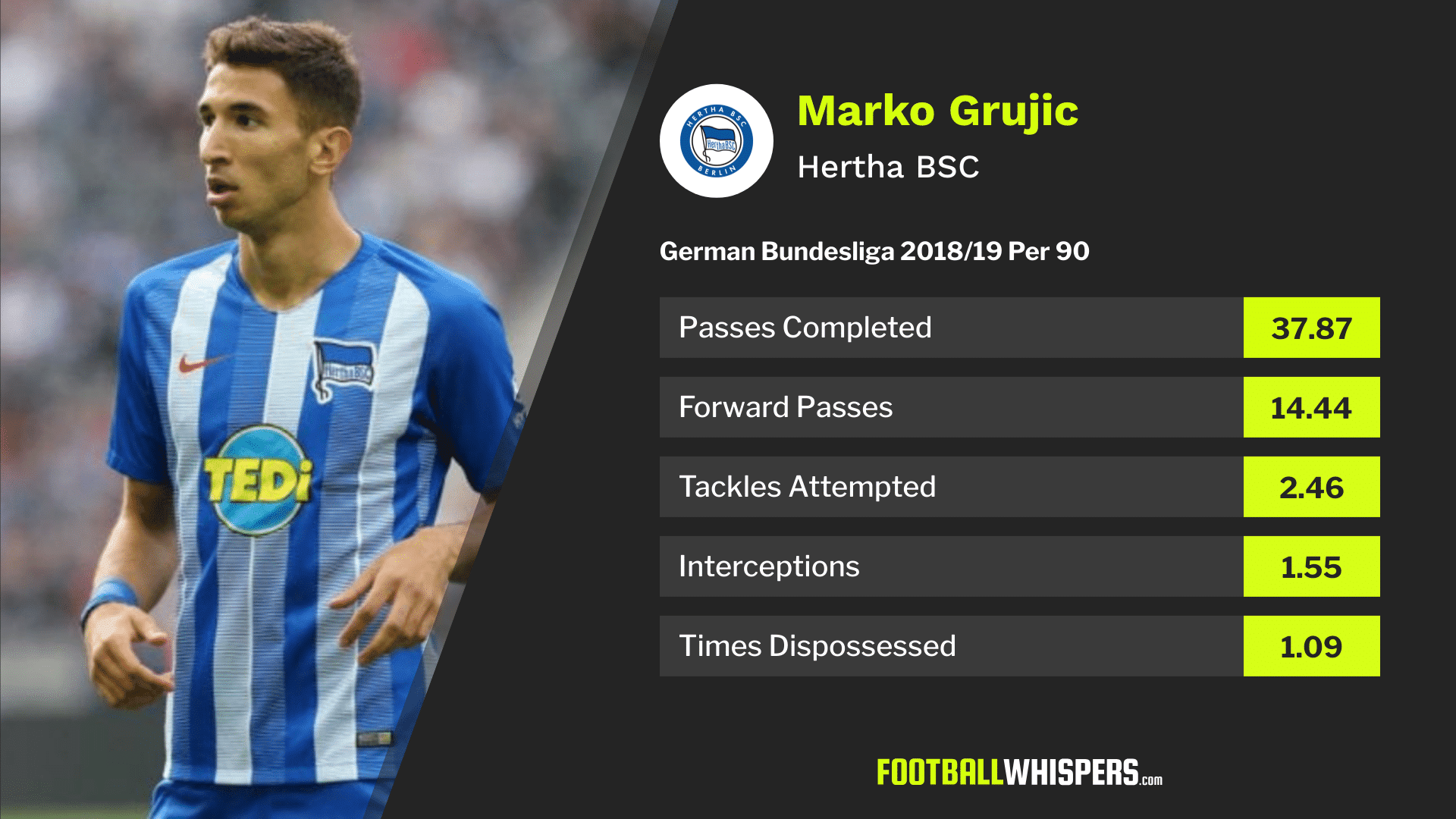 Liverpool, who are on course to smash their record points total in the Premier League and have reached another Champions League semi-final, must now decide whether to give Grujic a chance in their first team or cash in on interest from elsewhere. The 23-year-old has, according to the Independent, been linked with Atlético Madrid and Benfica, and could command a fee of £35 million.

That is assuming Liverpool see no place for Grujic in their team. Jürgen Klopp could opt to bring him back into the fold, perhaps as backup to Jordan Henderson, Fabinho and Naby Keïta. It remains to be seen, though, whether Grujic could fit into Klopp’s system, and whether he would be satisfied to wait for his chance.

“I feel very comfortable in Berlin. Hertha gave me a great opportunity to play in the Bundesliga,” Grujic said in a recent interview with Bild. “I'm still pretty young, for me this time at Hertha – with the exception of injuries – has been brilliant so far to show my qualities.

“But, ultimately, I cannot decide. But, if I could choose myself, I would stay with Hertha for another year, or maybe even two years, to make a very good name for myself by improving all my qualities. And that's only possible if you play every game.

“Hertha is my favourite. I would love to stay here longer. And if Liverpool ever wanted to sell me and I could decide, it would be great if Hertha made an offer. Most of all my self-confidence has increased due to the match practice. My defensive behaviour has also improved a lot because of the games.”

Grujic might yet have a future at Liverpool. But even if he does not, this loan spell at Hertha has set him up perfectly for a successful career at the top level.