As auditions go, Jack Grealish’s pitch to be included in Gareth Southgate’s next England squad wasn’t half bad.

In front of the watching Three Lions boss at Villa Park on Saturday, the Aston Villa skipper dragged his side to a dramatic last-gasp victory with a real captain’s display

It was Grealish who levelled for Dean Smith’s side after falling behind to Adam Webster’s header and it was the local boy done good who supplied a truly magnificent assist for Matt Targett’s stoppage-time winner.

“Jack did a lovely bit of skill,” Targett said. “I think he’s done two people and played a lovely ball through. I was so happy it went in because it had been so frustrating in the second half.” 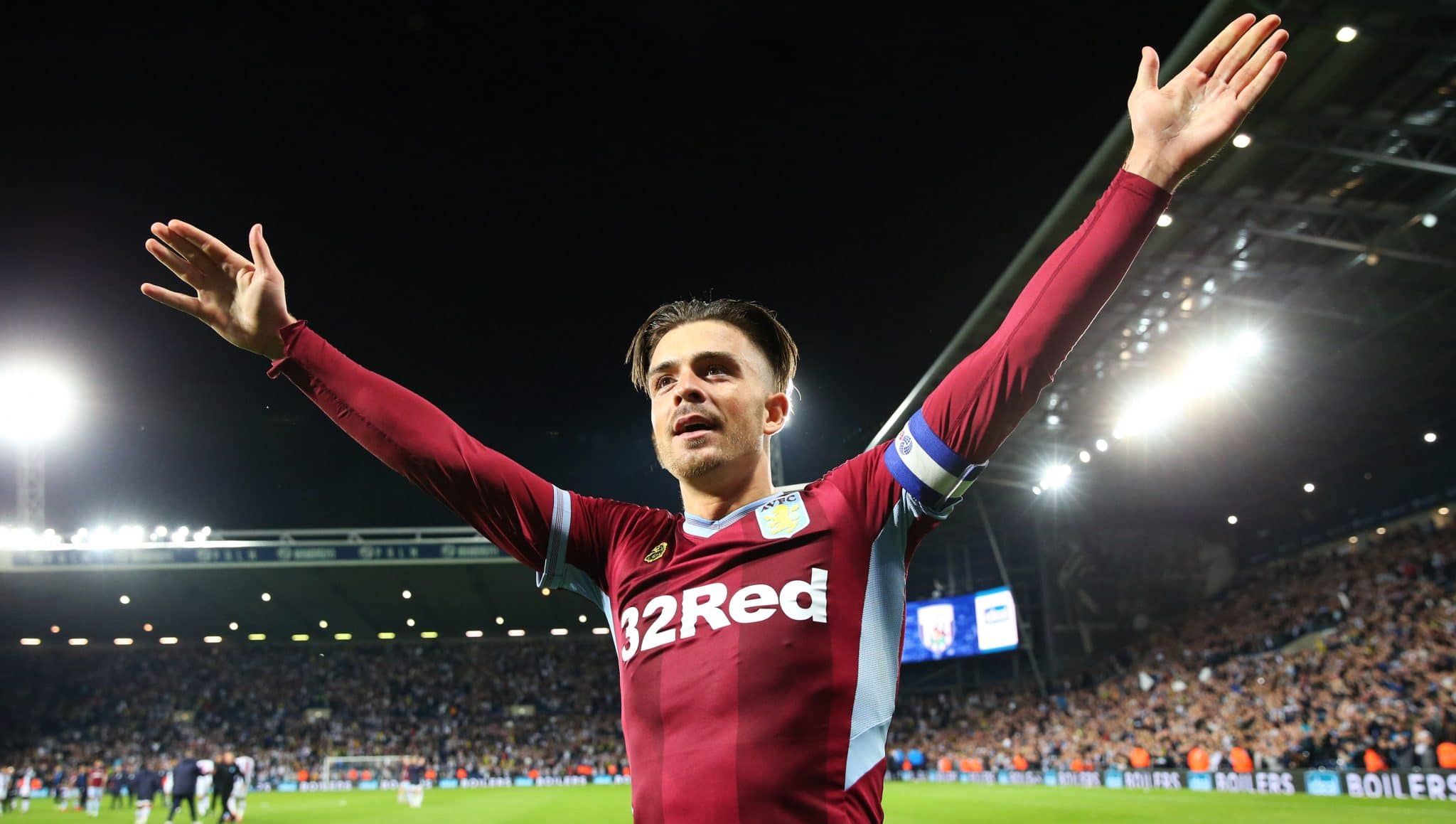 Grealish is Villa’s heartbeat. The truth is he has been for some time. At times he carried his boyhood club to promotion last season and was mesmeric on Saturday as Southgate ran his eye over the England hopefuls on show.

In fact, the 24-year-old Birmingham native might have had two assists were it not for the fact Conor Hourihane’s sumptuous strike from the edge of the box was ruled out for offside against Wesley.

But Grealish was at the centre of everything good about Villa – and not for the first time since promotion to the Premier League. Doing it in the Championship was one thing, when it was clear he was head-and-shoulders above his peers, but against the very best English football has to offer was the litmus test.

Thrown into the side during the dark days of Tim Sherwood, there was never any doubt about Grealish’s natural ability, flair or technique. At 5ft 7ins, his low centre of gravity enabled him to sidle past challenges, picking up speed and slowing down to shimmy and slalom through defenders.

But questions marks remained about his attitude, maturity and consistency. No more. Made captain by Smith, another boyhood Villa fan, Grealish has stayed off the front pages and instead begun to dominate the right section of the papers.

“People spoke about it being a burden for him but from what I have seen he likes the responsibility,” Smith said of his decision to formalise Grealish’s role as Aston Villa’s leader in March of this year.

The moment which underlined Grealish’s improved temperament for the world to see came in last season’s Second City derby at a raucous St. Andrews’.

In just the ninth minute of the game, a hooligan entered the field and punched Grealish. But the Villa No.10 refused to react and got his comeuppance in the best way possible, scoring the only goal of the game midway through the second half.

It was a far cry from the Grealish who was pictured inhaling nitrous oxide in 2015. “We can't condone that behaviour,” his then-manager Sherwood said at the time.

“He is now in a responsible position as a professional footballer, he's got to make sure it won't happen again, he's assured me it won't.” 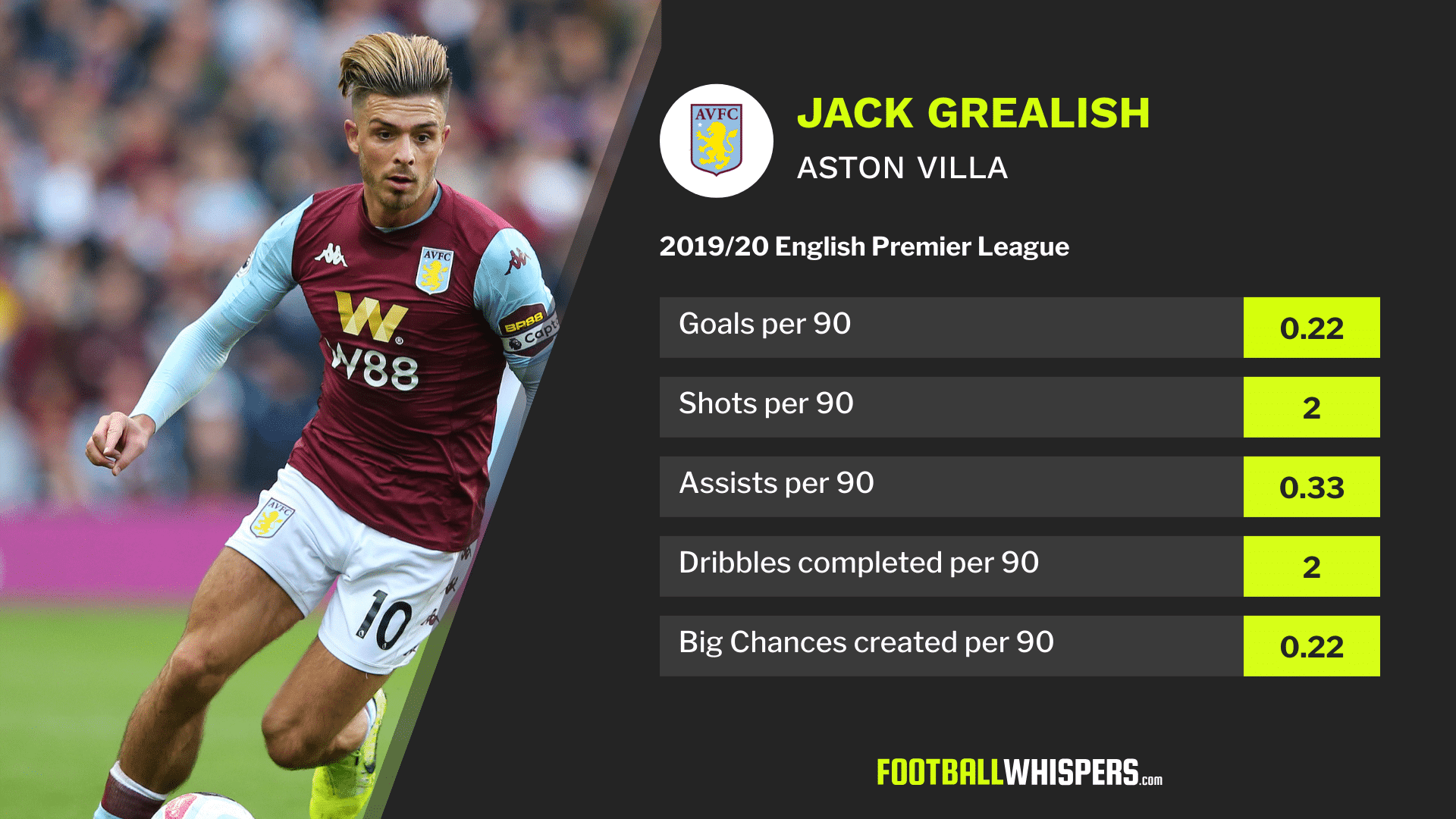 The only highs Grealish is getting now are with Villa. He ranks third among Premier League midfielders for shot assists per 90 (2.44) and 21st for completed dribbles with two per 90. However, what’s more of a surprise is his defensive work-rate.

It would be easy to pass Grealish off as a luxury player, someone who only contributes when his side is in possession. But few do more to regain the ball for Villa than their totemic captain.

This season Grealish ranks tenth among all Premier League midfielders for defensive duels won per 90 with eight. He’s ninth for possession regains in the defensive third (4 per 90) which shows he’s happy to work hard for his team by tracking back.

Inevitably, though, it’s his attacking output which will draw the plaudits and former Villa star Tony Cascarino believes Grealish is now good enough to play at a higher level.

“Are Villa going to challenge the football elite in this country?” Cascarino said on talkSPORT. “What they’ve got is a very young side, is very energetic and have someone who is now ready to play Champions League football in Jack Grealish.

“Do Aston Villa want to keep him because if they can do that, then you build around Jack. He is a player who has to be playing at the highest level and I feel he is showing he has the heart to do it.”

The natural step now is England. Grealish has been here before. Only a handful of games into his Premier League career he found himself at the centre of a tug-of-war between England and Ireland having turned out for the Republic at youth level.

However, after a protracted saga, Grealish confirmed his intention to represent the Three Lions at senior level in 2015. He made his under-21 debut soon after but a full call-up never arrived and that decision might have looked short-sighted.

Until now. Southgate wants a creative spark for his midfield. James Maddison was meant to be that player but has done himself few favours by pulling out of the most recent squad with illness only to be pictured at a casino while his England team-mates were playing.

Grealish is past that phase of his life. He’s now the mature, confident, game-changer England are crying out for. The part is his.