But those players brought to the KCOM Stadium on a rescue mission – almost to a man – were pivotal in Hull's near Great Escape. None more so than Polish winger Kamil Grosicki who is a West Ham United transfer target following an impressive five months on Humberside.

The 28-year-old wideman joined from Ligue 1 side Rennes on January 31 on a three-and-a-half-year contract. But following Hull's relegation to the Championship he is extremely unlikely to see out much more of that deal.

Watford and Premier League new-boys Newcastle United are also reportedly keen on Grosicki who made bagged three assists in just 12 top-flight starts after crossing the channel. Prior to January he had already scored four and set up three in just nine starts for Les Rouges et Noirs.

Like most other areas of their recruitment, West Ham's business out wide this season has been fairly disastrous. 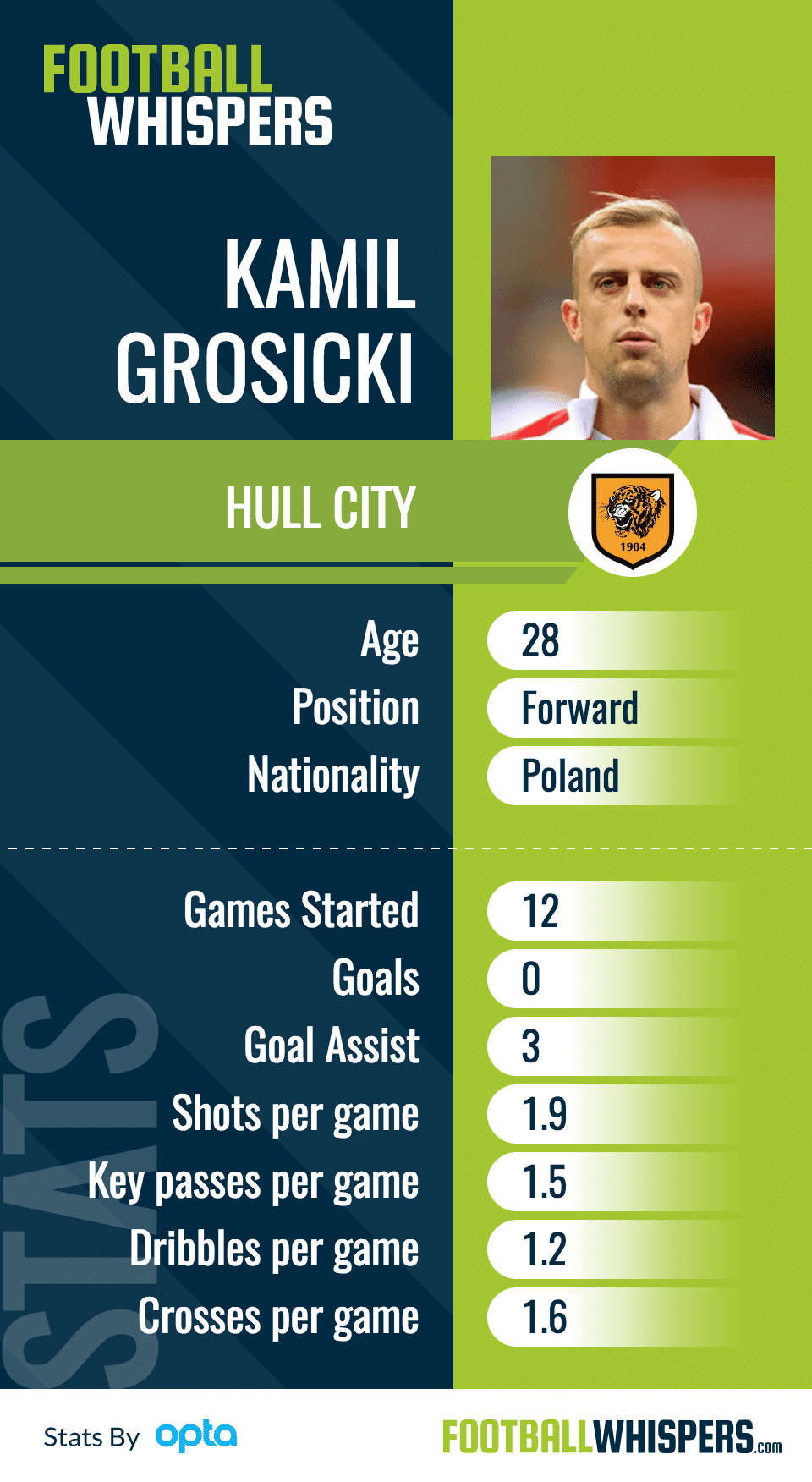 Sofiane Feghouli joined from Valencia in the summer but managed just 11 Premier League starts. Gökhan Töre arrived on loan from Besiktas having played under Slaven Bilić in Turkey but made just three top-flight starts before a season-ending injury in October.

In January, and with the relegation zone looming into focus, the Hammers spent £10.2million trying to inject more spark into the flanks by raiding Hull for Robert Snodgrass. But the Scotland international followed in the footsteps of those who had gone before and made just eight league starts.

Hull, ironically, did not miss the former Norwich City and Leeds United player as much as they might initially have feared with the largely unheralded arrival of Grosicki plugging that gap.

Now the Hammers are set to return to the KCOM for a second bite at the cherry. This time they might find something a bit tastier in Grosicki. The Pole was one of several January additions at Hull to impress with his pace, dribbling and ability to beat men, getting bums off seats and giving the beleaguered Tigers real hope of survival.

Grosicki's impact should not have been a surprise. The former Sivasspor man has 49 caps for Poland and has played for his country at the 2016 European Championships in France, the 2014 World Cup in Brazil and the 2012 Euros in his homeland.

However, the fact Grosicki moved to Hull, mired in a relegation battle, for just £7.7million is indicative of the lazy scouting in the Premier League. Signed from an unfashionable club in and unfashionable league, he proved a bargain. And West Ham will be made to pay for their mistake.

West Ham even got a close-up look at Grosicki when they went to Hull in April. Leading 1-0, West Ham were pegged back when the Pole supplied a delightful assist for Andrew Robertson to score.

In the image below Grosicki has just received possession. He holds onto the ball to assess his options and could have simply gone down the line and tried to sling a cross into the middle.

Instead he sees the steaming run of left-back Robertson (circled in red) and slides a perfectly-weighted cross into the path of the onrushing defender who advances to score for the Tigers. 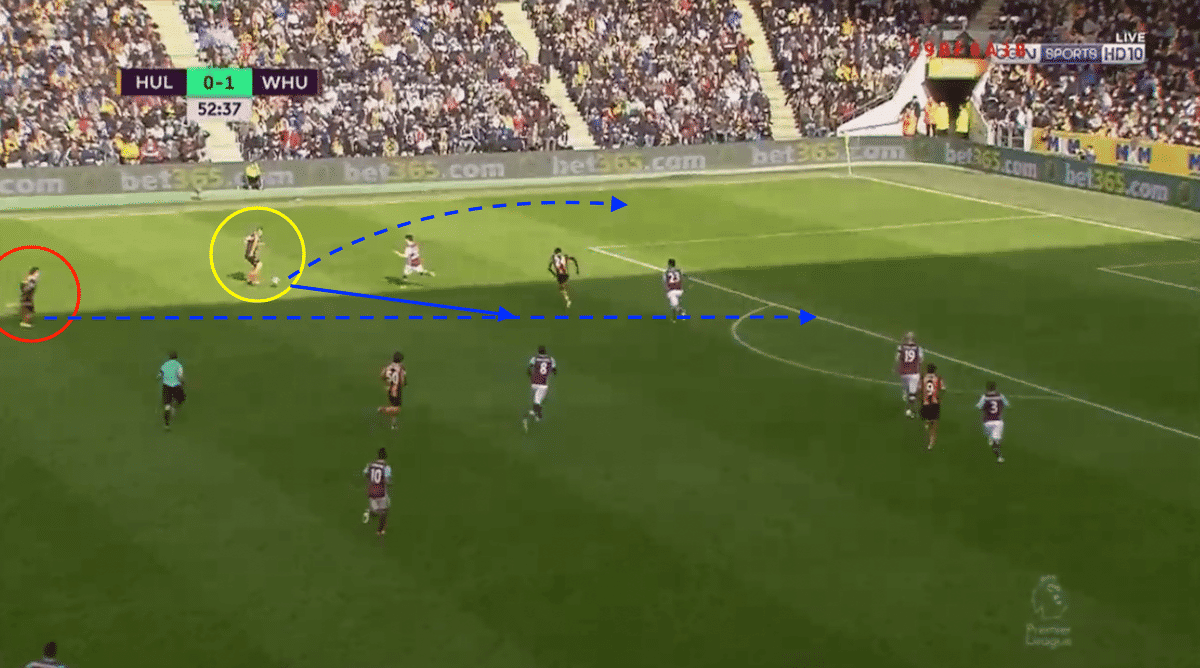 But Grosicki can get to the line with his pace and one-on-one ability before delivering also. The perfect example of which came in last summer's European Championships when Poland met Denmark.

With the game goalless, Grosicki scampered down the left-hand flank and fired a low cross into the corridor between the defence and keeper where Bayern Munich forward Robert Lewandowski was lurking to score. 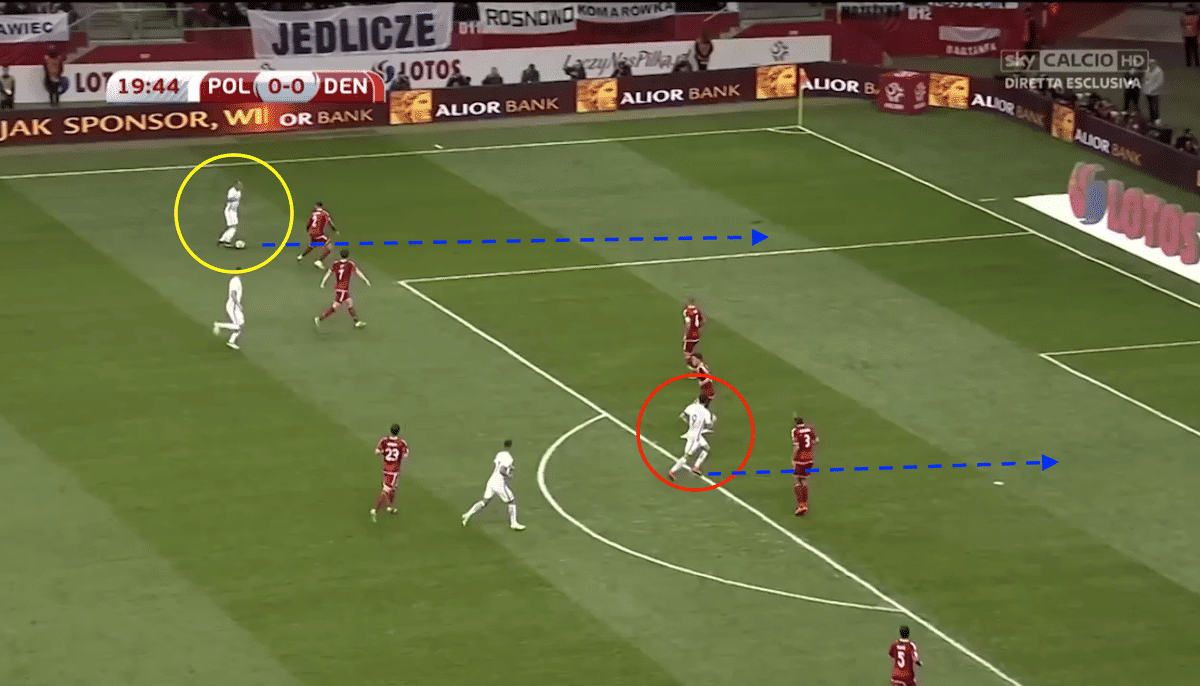 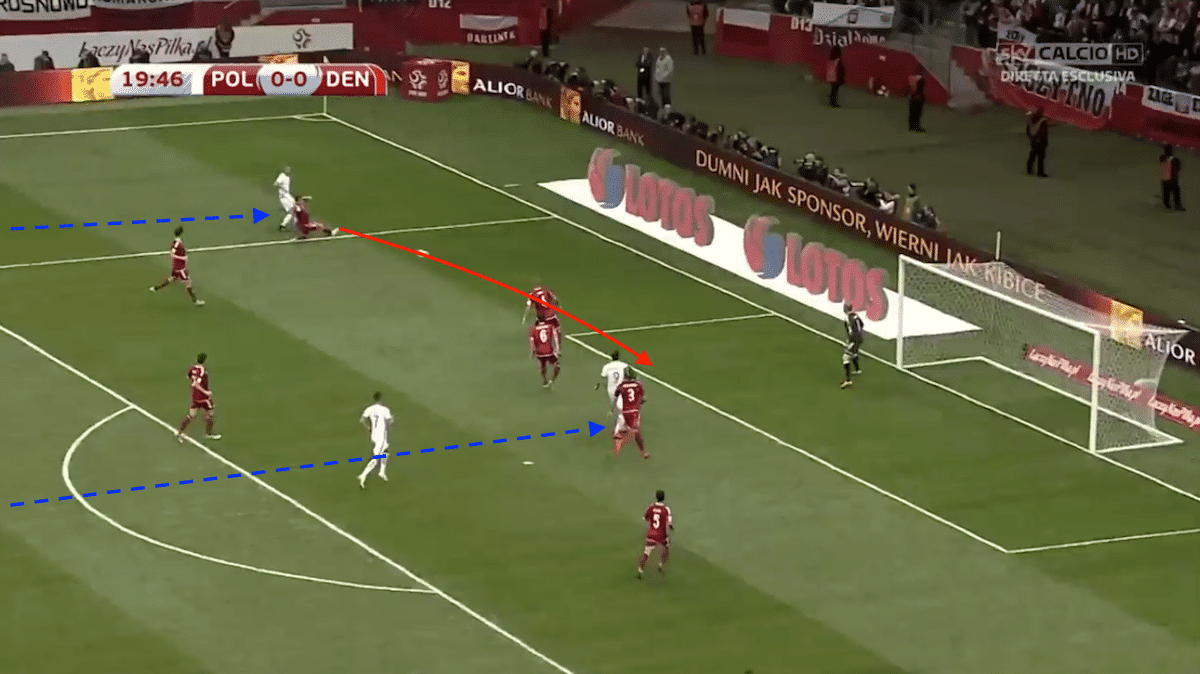 The other part of Grosicki's game which will appeal to Bilić is his finishing. Despite never being a regular starter for Rennes, Grosicki scored 13 league goals in his last season-and-a-half in France – a feat made all the more impressive by the fact he was afforded just 25 Ligue 1 starts.

His audacious, impudent, first-time effort against St Etienne in December was some parting gift.

He is an intelligent attacker too and likes to drift in off the right-hand flank to get into the penalty area. Two of his four goals for Rennes this season came in the 2-1 win over Nantes in October and both were similar; Grosicki arriving in the penalty area to score.

The second, in particular, highlighted his awareness as he took off as soon as Ndombe Mubele gained possession on the left (circled in red). 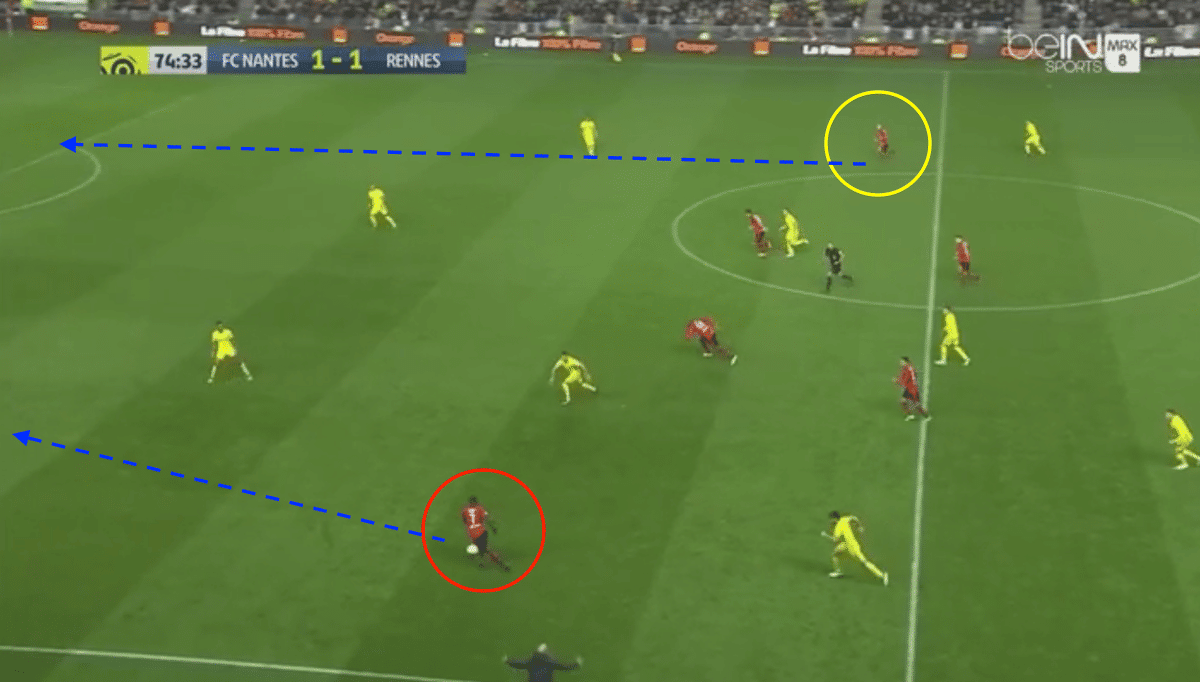 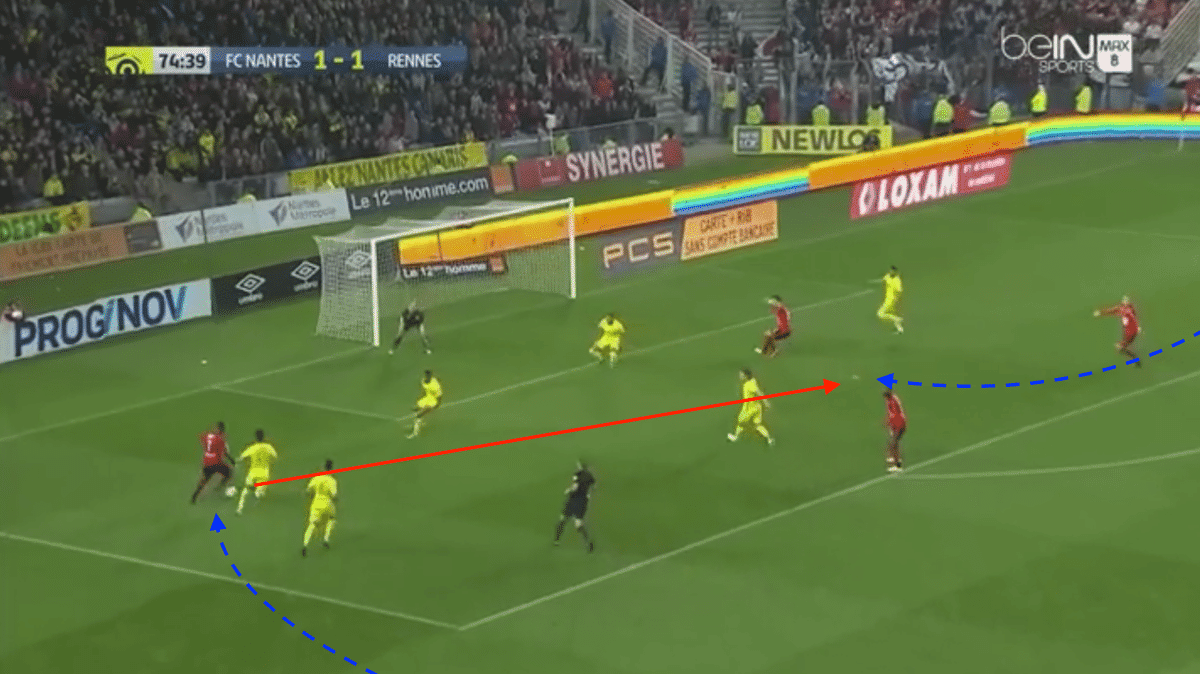 These are the sort of incisive contributions which will take the goalscoring burden from Andy Carroll and Michail Antonio while providing the former with deliveries to thrive on also.

If the Hammers can persuade Grosicki they are a better option than Watford and Newcastle they could very well add the missing piece of an exciting attacking trident next season.