Grimsby and Nottingham Forest will meet on Tuesday, August 23rd in the Round of 64 in EFL Cup. So, check our preview of this game to learn more about it and to get some free betting tips.

If you are not sure what is the best bet for Grimsby vs Nottingham Forest, take a look at our favourite betting picks for this match:

Nottingham Forest to Win with Handicap (-1)

This will be a duel between a team that's playing in League Two and the newly-promoted Premier League team. So, it's clear that the guests are the favourites and we expect them to justify this tag.

After all, Nottingham Forest has already collected four points in Premier League from three games, while Grimsby has five points from four matches in League Two. With that in mind, we can see the guests winning this game by at least two goals.

Although these two teams haven't met in recent years, which means that we have no h2h data to help us in our next prediction, we don't expect both teams to score in this game.

The guests are clear favourites in this game, but let's take a better look at both teams before their upcoming duel:

After the first five rounds in League Two, Grimsby Town has one win, two draws, and one loss. That's far from a great start, although it is pretty much in line with the expectations from this team since this tally puts them in the sixteenth place in the standings, near the middle of the table.

When it comes to team news, there are a few doubtful players due to injuries, like Maher, Orsi, and Essel.

Many years have gone by, but we are finally watching Nottingham Forest play in the Premier League once again. And the team started the new season back in the top flight with four points from the first three rounds, which is far from a bad start for them. After all, they are currently in the middle of the standings.

Meanwhile, Nottingham Forest will be without Mousa Niakhite, Omar Richards, and, most likely, Jack Colback.

The best odds, stats, and more for Grimsby vs Nottingham Forest

If you want to place a bet on the best Grimsby vs Nottingham Forest odds, you can check them out right here on our site:

FAQ for Grimsby vs Nottingham Forest 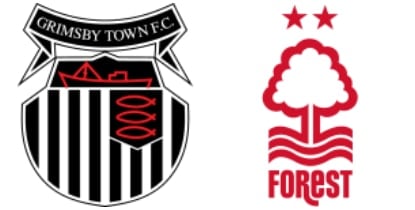