There is no little irony in the fact Alejandro Grimaldo, the reported Tottenham transfer target who could replace Danny Rose at Spurs, will require a quick Google from most – the Spurs defender included .

According to reports in Portugal, the 22-year-old – better known as Álex – is the man Mauricio Pochettino has lined up to succeed Rose in North London.

Despite turning out for Barcelona‘s ‘B' team in his youth, Grimaldo is not a household name – something Rose lambasted Spurs for in an explosive interview with The Sun in the summer.

Any deal would spell the end of Rose's Tottenham career. The England international may deny it, but the fact Pochettino refuses to select him regularly points to a rift between the two.

Signing another player who can play at left-back to add to the competition already offered by Ben Davies will be the final straw for Rose, who has been the subject of Manchester United transfer rumours ever since admitting he would like to play in the North of England, nearer his Leeds home, before the end of his career.

Who Is Álex Grimaldo?

For every player to graduate through Barcelona's famed la Masia academy and pull on the famous blue and red striped jersey, there is a handful who go out into the wider football world and attempt to carve out a career in the game away from the Camp Nou.

Grimaldo is in the latter category, though the expectation ahead of the 2015/16 campaign was he would instead be promoted into Luis Enrique's first team to back up regular No.3 Jordi Alba.

Having moved to Barça from hometown club Valencia in 2008 as a 13-year-old, Grimaldo progressed through the youth ranks eventually being nurtured into an attack-minded left-back having started his career further forward.

After making 96 appearances for Barça B, the first of which made him the youngest debutant for the Blaugrana's second string aged 15 years and 349 years, Grimaldo was sold to Portuguese giants Benfica for just €1.5million.

Suffice to say, the teenager was unimpressed. “He has never told me anything,” the Spaniard said of first-team coach Enrique. “I have not had any contact with him, nor do I have anything to say to him.

After three seasons in Portugal, that is a decision Barça may regret. He has been eased into first-team action at the Estádio da Luz but is now one of the most sought-after young full-backs in Europe with both Manchester clubs, Juventus and Napoli keen.

Often likened to Alba while at the Camp Nou, the Spaniard possesses many of the same qualities as the World Cup winner. He effectively plays two positions from left-back; defending resolutely and bombing forward to support the attack

A midfielder in his early playing days, Grimaldo still demonstrates some of the innate knacks he had at the start of his career and, unlike Alba, will happily come inside to join the midfield when Benfica are in possession.

He is still happy hugging the touchline and going one-v-one, but there is more than one dimension to him when attacking.

In the stills below, taken from Benfica's 3-1 win over Estoril earlier this month, Grimaldo (circled in blue) comes inside to support the player in possession, receives a pass and drives into space before cutting back dangerously.

On top of that he boasts good delivery with his left foot, something underlined by the fact he has already supplied three assists in just nine Liga NOS starts for Benfica this term – as many as he managed in five more league games through the whole of last season.

The obvious drawback to Grimaldo is his height. At just 5ft 7ins he is on the small side, even in the modern game where full-backs have become less physically imposing specimens than previously.

To that end it is no great surprise that he is not very good in the air. Those two factors, in a league which is famously physical, could present problems.

The other big question mark against his name is his capability to play 40 games a season. Grimaldo has only made 30 or more starts in a season once in his career and not since the 2014/15 campaign.

Due to a combination of injury – not least the serious cruciate knee ligament blow which floored him for nearly a year until he returned in January 2014 – and the selection of veteran Eliseu ahead of him, he has not been a regular at Benfica until now.

But that shouldn't matter too much because he is unlikely to break into the side ahead of the highly-impressive Davies, should he end up at Tottenham. 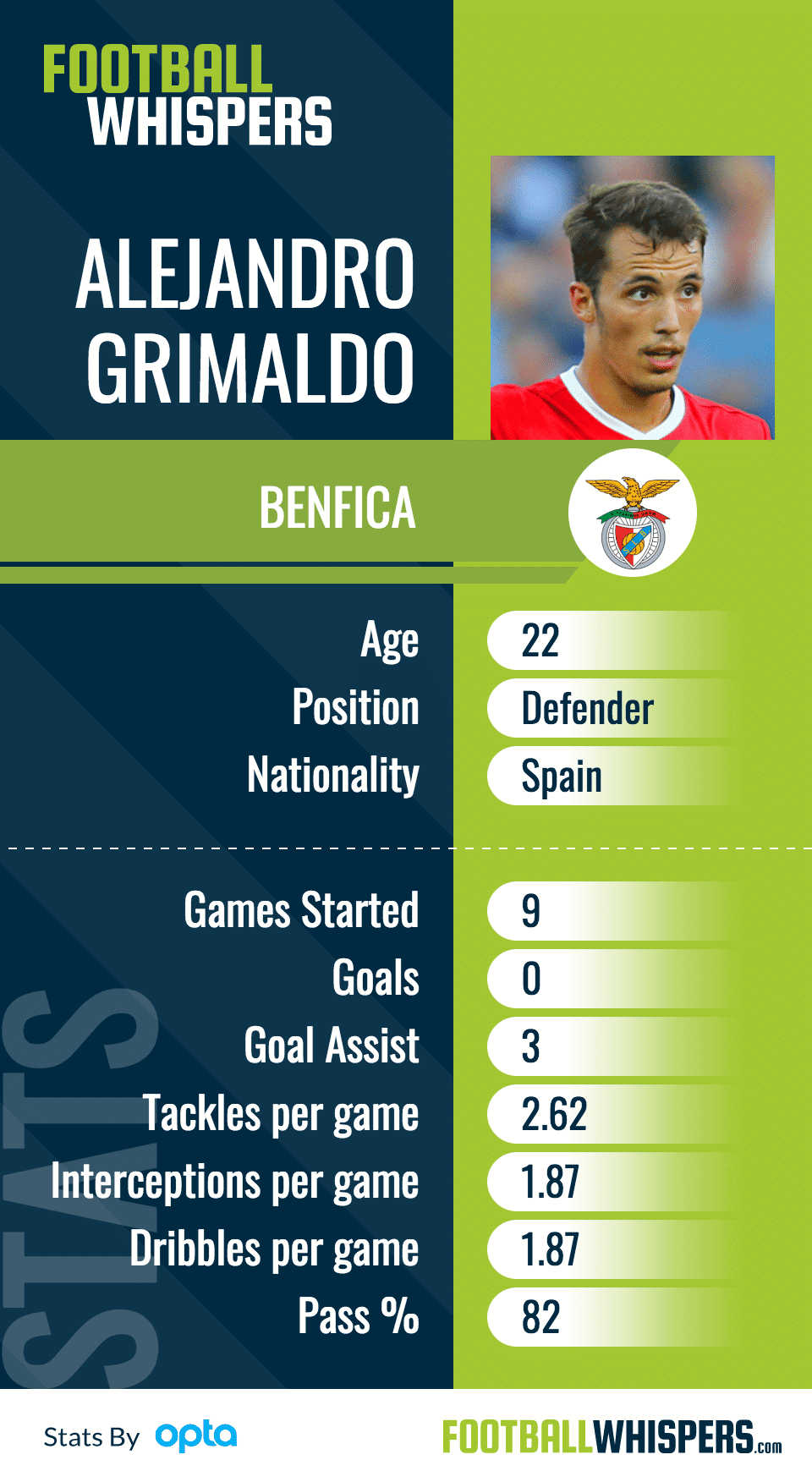 How much is Grimaldo worth?

He certainly won't come cheap. The most recent reports, emanating from talkSPORT via Jornal de Noticias, suggest Grimaldo will cost as little as £25million.

That figure, though, is not in keeping with the €40million quoted by Calciomercato in response to Manchester City transfer rumours in November.

However, there are also reports, per Sports Witness, of a €60million release clause in the defender's contract.

That kind of figure would put Grimaldo on a par with long-term Chelsea transfer target Alex Sandro of Juventus. While no buying club would be obligated to hit that fee, Benfica will push for as close to it as possible.

Why Premier League clubs should move for Grimaldo

Despite his stature, the 22-year-old is perfect for the Premier League where flying full-backs rule the roost. Furthermore, he would be comfortable in a back three system playing as a wing-back – something all of the top six have dabbled with at one time or another.
Grimaldo clearly has some improving to do, highlighted by the fact he has only recently become Benfica's first-choice left-back, but he has the raw tools to be a hit in the Premier League.

English clubs are among the few who could afford the kind of fee it will take to sign someone who, initially at least, might not arrive in England as a first-choice No.3.

With both Manchester clubs, Liverpool, Juventus and Napoli all circling, Spurs could be priced out of a move – another criticism levelled at the club by Rose.