Antoine Griezmann is something of a showman. His goal celebrations – often inspired by video games – are flamboyant. His hairstyle is ever changing, perhaps an ode to his idol David Beckham. And then there's the documentary he made last summer.

The Decision was an elaborate PR stunt. A brand-building exercise. And worked to perfection. In the made-for-TV movie, Griezmann agonised about his future: should he stay at Atlético Madrid or join Barcelona?

Griezmann was tortured by the choice he had to make. He never asked for this interest he claimed, it just happened. It was exhausting; the French star fell asleep in the back of a car in one scene.

But then came The Decision and Griezmann opted to remain at Atlético. He wanted to help the club win the Champions League in their own stadium, the Wanda Metropolitano. Barcelona were snubbed.

The 28-year-old went on to sign a new contract with Atléti. He became the best-paid player in the club's history yet his deal included a caveat. His buyout clause would initially rise to £170million but this summer drop to £100million.

It was a back door out of Atlético. An escape route should he ever need it.

Ten months on from his decision to remain in the Spanish capital, Griezmann wants out. Diego Simeone's side failed in the Champions League – they squandered a first leg advantage and were knocked out by Juventus – and are unlikely to chase down Barcelona in the La Liga title race.

According to several reports in Spain, Griezmann regrets the choice he made last summer. He hopes Barcelona return for him at the end of this season but there is no guarantee the scorned Catalan giants will.

And that could open up a move to the Premier League. All the top-six clubs in the English top flight could not only pay Griezmann's buyout clause but also match his reported £335,000-a-week wages.

Manchester United's interest in the France star is long-standing. Manchester City have been linked this season, too. Chelsea need to sign a forward this summer – if their transfer ban is put on hold – while Arsenal, Tottenham Hotspur and Liverpool all have the financial means to sign Griezmann.

His £100million buyout clause isn't pocket change for even the most wealthy of clubs but that doesn't mean it isn't value for money. Griezmann is a player of immense talent, one who finished third in the 2018 Ballon d'Or. Without that clause, he'd be worth at least £150million. 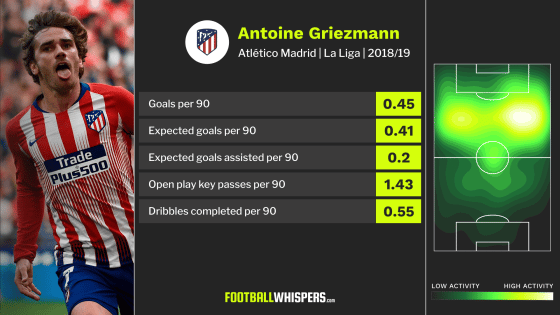 During his four-and-a-half seasons with Atlético, Griezmann has struck 131 goals in 250 games. It's an impressive return given the defence-first nature of Simeone's side.

Atléti rarely control possession; their average in La Liga this season is 48.66, the eleventh highest in the division. They instead sit back, soak up possession and hit teams on the counter.

This has benefitted Griezmann, his pace and ball control vital in helping the Madrid-based side break at speed. Yet there is so much more to his game, so much more for him to give.

For example, among La Liga attackers this season he is inside the top ten for goals, assists, shots on target, forward passes, open play key passes, successful through balls, crosses completed and successful tackles.

He is a complete forward, one who can score and create in equal measure. If let of the leash and freed of defensive responsibility – something which hasn't happened with France, either – Griezmann could become even more of a threat.

It's an enticing prospect for any prospective side. Off the pitch there would be benefits, too. Griezmann is a global star. He's a World Cup winner. He is handsome. He is simply a marketing team's dream – don't underestimate how important that is for English sides.

There will never be a better time to sign Griezmann than this summer. He is in his peak years and would cost a fraction of his true value. And who knows, perhaps in the Premier League he could become the greatest showman.