Greuther Furth got a baptism of fire on their return to Bundesliga. Stefan Leitl will want to put the result behind him as he prepares his charges for Arminia Bielefeld's visit to the Sportpark Ronhof Thomas Sommer.

Stuttgart welcomed backed Greuther Furth with open arms, demolishing them 5-1 in Round 1 of action to give a glimpse of what life in the German top-flight football is all about. Stefan Leitl has another tough task on his hands as he pits his wits with Frank Kramer in the Arminia Bielefeld. The Blues were victorious on their last trip to Sportpark Ronhof Thomas Sommer and should take the three points on offer again.

Arminia Bielefeld failed to trouble the scorers against Freiburg but will fancy their chances against Greuther Furth. The Bundesliga newcomers last outing saw six goals with one of which coming from their end. In the competitive match prior in the DFB Pokal, they lost out to Babelsberg in a five-goal thriller. Bielefeld also saw goals in their cup outing, scoring six of the nine goals on show against Bayreuth.

Against Freiburg, Arminia Bielefeld had 10 attempts on goal with 3 on target but could not move the score. It was a stark decline from the six goals they claimed against Bayreuth seven days prior. Greuther Furth has been luckier in this department, getting on the scoreboard in each of their outings whilst conceding eight goals in return. Given the hosts troubled defence coupled with the ability to make the scoreboard tick, we expect both sides to score.

Greuther Furth vs Bielefeld: Check out the best odds and the latest stats

Return to the German top-flight football was supposed to bring happiness at the Sportpark Ronhof Thomas Sommer but it has been anything but such. They were knocked out of the DFB Pokal at the first hindrance and were made fools in front of everyone by Stuttgart on opening day. With the season just starting, even the most ardent of Greuther Furth fans will be pessimistic about their chances.

Next up for them is Arminia Bielefeld. The Blues showed resolve as they held out agianst Freiburg in a goalless draw. They failed to showcase their scoring potential which was exhibited a week before in a 3-6 thrashing of Bayreuth. Frank Kramer will send his side out against Greuther Furth to relive the DFB Pokal memories as they are a team they have a positive record in recent history.

Questions About Greuther Furth vs Bielefeld 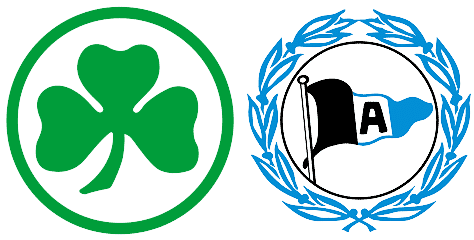 Where is the game being played? Sportpark Ronhof Thomas Sommer.

Which team is the favourite to win? Bielefeld.