Arsenal were in need of reinvigoration. The glory days of the late-1980s and early-90s were long gone; it was the summer of 1996 and, rather than challenging for the title, they had finished the previous Premier League campaign in fifth place.

Uncertainty surrounded Highbury over the future of manager Bruce Rioch – who had done a reasonable job during his year in charge, leading the club up the table from the obscurity of 12th place in 1994/95 – but departments of the Gunners’ side, including England midfield duo Paul Merson and David Platt, were beginning to show signs of age.

Just two days later, a pair of new signings piqued the curiosity of fans and pundits. Former France international defender Remi Garde, aged 30, joined on a free transfer from Strasbourg, and on the same day, a 20-year-old French midfielder by the name of Patrick Vieira arrived from AC Milan for a transfer fee of £3.5 million.

The deals increased speculation that Arsenal’s next manager would be their first ever appointment to come from outside of the United Kingdom. And, within a month, the rumours were proven correct, with Arsene Wenger hired as Rioch’s successor.

The Frenchman arrived from Japanese club Nagoya Grampus Eight with a solid track record from his time in charge at Monaco – and his influence had already been clearly felt through the signings of Garde and Vieira, the latter of whom would go on to become one of the most important players in Arsenal history.

Vieira was born in 1976 in Dakar, the capital city of Senegal, but by the age of eight, had moved to France. It was there that he would begin his football career, joining Cannes as a teenager after spells in the youth teams of Tours and FC Drouais. Cannes had a reputation for developing fine young footballers having produced Zinedine Zidane, and Vieira would carry on this tradition. 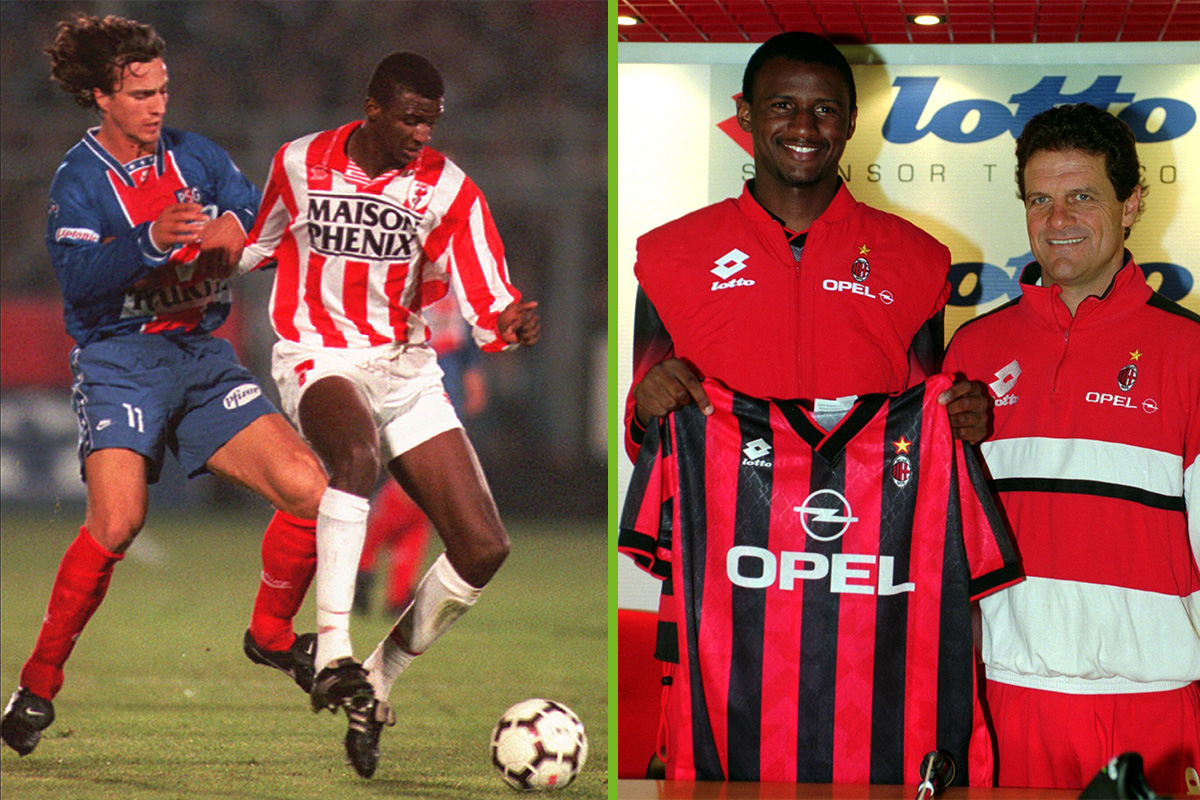 After making his debut for the club at just 17 years of age, he was announced team captain at 19. And, having established himself as one of the most talented up-and-coming prospects in France, he moved to AC Milan in 1995.

The Rossoneri had dominated Italian football throughout the early 1990s and had won the Champions League the year before with arguably the finest performance ever witnessed in a major final, demolishing Johan Cruyff’s Barcelona by four goals to nil.

Fabio Capello had taken Arrigo Sacchi’s iconic side and refined it, bringing about greater functionality, something evidenced by his use of Marcel Desailly as a midfield destroyer.

However, Vieira, perhaps brought in with a view to competing with Desailly for the more defensive midfield role, would struggle to break into the starting line-up. Ultimately, he made just two Serie A appearances for the club, although he has since recalled fond memories of his time in Milan despite his premature departure.

“It was unbelievable,” he told Arsenal Player of his time with Milan. “I felt like a kid to play with Alessandro Costacurta, Roberto Baggio and George Weah. Capello was the manager and when he was doing his tactical training, I was always going behind Marcel Desailly or Demetrio Albertini, so I learned from them. I left because I wanted to be part of the France 1998 World Cup team and I needed to play.”

Vieira’s search for regular game time would take him to English football, with Wenger’s appointment as manager proving influential in the player’s decision to ignore a potential move to reigning European champions Ajax in favour of joining Arsenal.

After a failure to launch in Italy, the transfer was a risk for all involved.

Arsenal had spent money on a relatively unproven, inexperienced youngster, while Wenger had put his reputation on the line for the player, making Vieira his first signing as the club’s manager to involve a transfer fee. Meanwhile, Vieira himself was gambling with his career by throwing himself into a daunting environment. 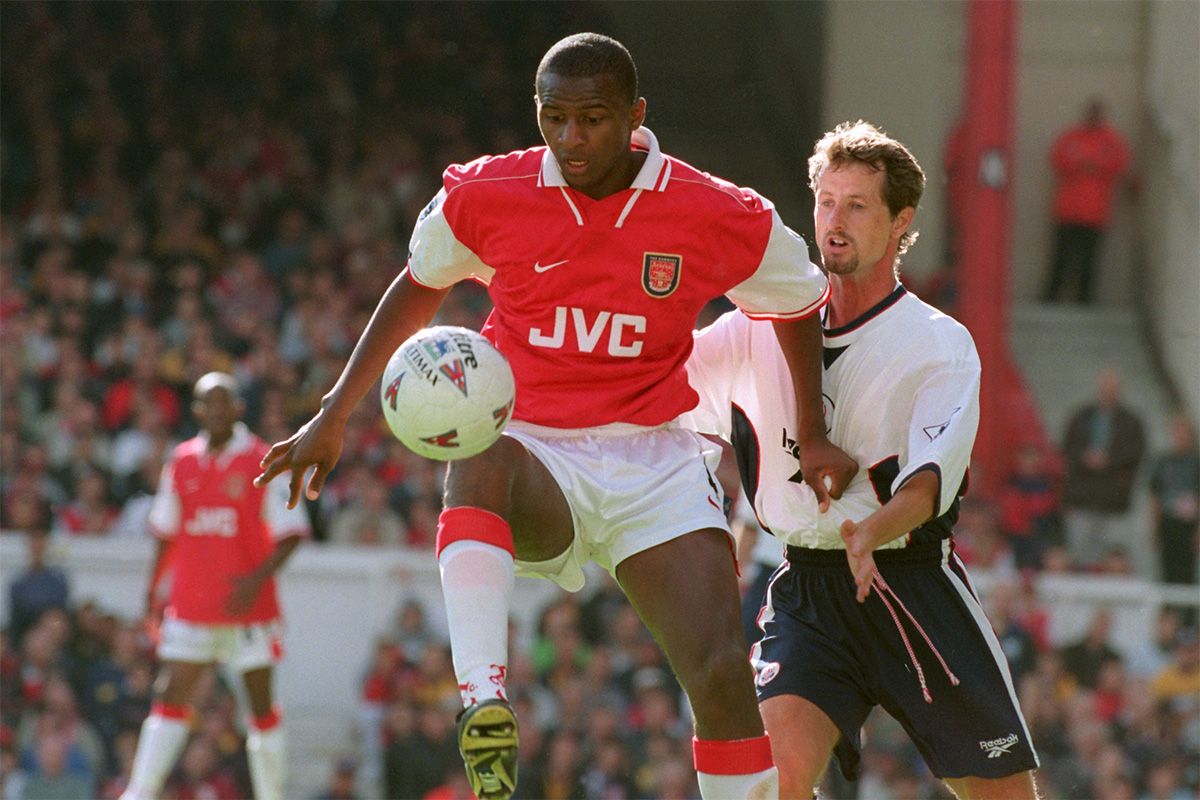 “I had to prove everything because I was coming from Milan and nobody knew me,” Vieira told Arsenal.com when discussing the risks of his signing for the Gunners. “The language was difficult, the culture was completely different, so I had to adapt really quickly. I hadn’t done anything in football… so I had it all to do.”

And he pretty much did it all.

In his first season, Vieira established himself as a regular at the heart of Arsenal’s midfield; his diverse mix of qualities forming an all-round player. Lanky and thin, his physique belied a powerhouse in the making. His jaunty long-legged strides, athleticism and endless reserves of stamina were matched by a technical craft and intelligence seen only in the best. A formidable ball-winner he may have been, but he was also capable of penetrative passes and lung-bursting runs through the middle.

Essentially, Vieira was a dogged defensive harrier, a ball-carrier and a creator all rolled into one. He was able both to apply pressure when defending and to resist it when attacking. At a time when Arsenal’s midfield was ageing, he was the ideal multi-purpose player to re-energise the team, helping them to a third-place finish in his debut campaign.

In the summer of 1997, Merson left for Middlesbrough and Wenger brought in Emmanuel Petit from his old club Monaco to partner Vieira in the centre of midfield. The French duet formed an irrepressible partnership for three seasons; Petit’s cerebral left foot and guile combining wonderfully with Vieira’s devastating tackles and surging runs.

Petit and Vieira were Arsenal’s engine room for the club’s 1998 league and cup ‘double', though the latter’s disciplinary problems were becoming more noticeable. His wholehearted, aggressive style led to him receiving more bookings than any of his team-mates that season, but the dynamo refused to alter his manner on the pitch. 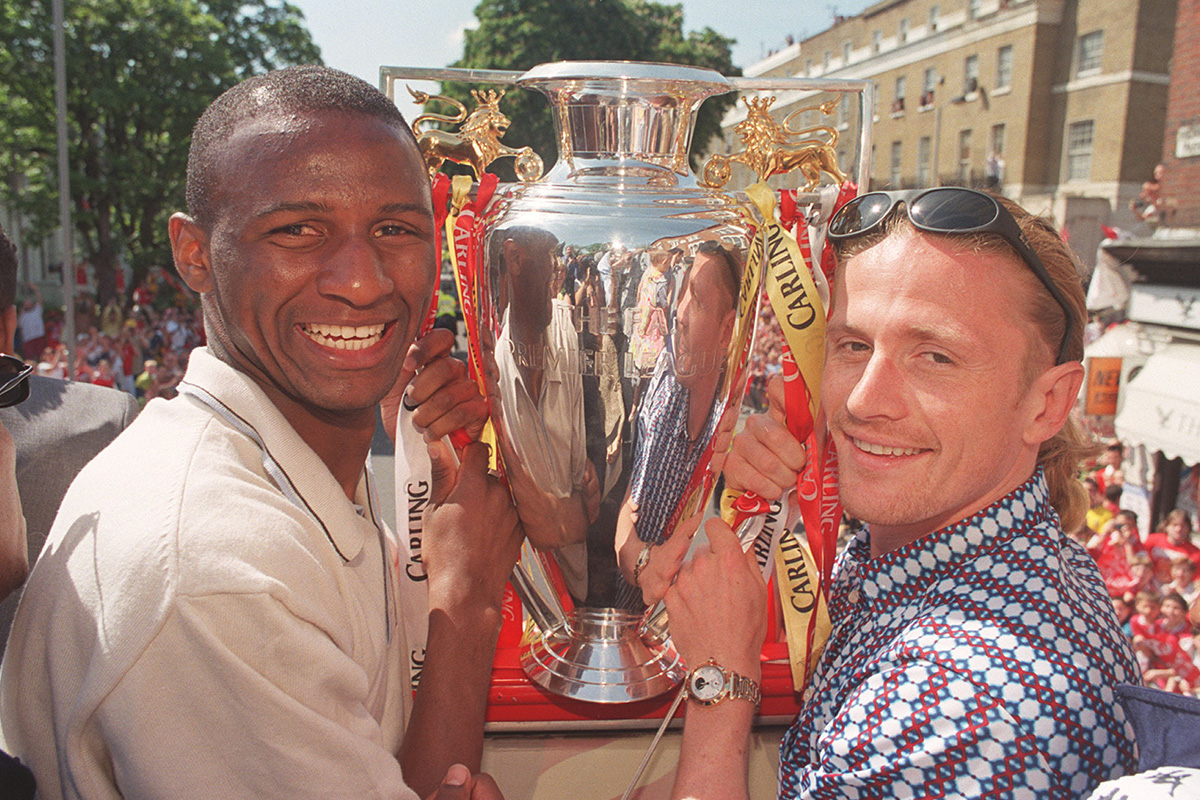 He and Manchester United’s Roy Keane became fierce competitors, bad boys and hard men with a point to prove against one another at a time when their teams were by far England’s best. More than anything, or anyone else, their legendary set-tos defined their teams’ rivalry.

Ultimately, the former unknown would play a vital role for Arsenal for nine seasons, returning to Italy in 2005 after signing for Juventus in a deal worth £13.75m. The sale was made in order to allow a burgeoning Cesc Fabregas to flourish alongside the more defensively-minded Gilberto Silva, but the tactical reasoning did little to ease the pain of Arsenal fans, sad to see a legend leave.

Vieira came to England to prove himself, but he did so much more than that. He was the first big signing of Wenger’s reign; helping to kick-start a fascinating new era in Arsenal’s history. At a time when the London club played some of the best football in the world, Vieira’s energy, technique and intelligence were microcosmic of the team. For a time, he was Arsenal.