Great Olympics line up against Hearts of Oak on 12/06/2022 having secured a place in next season’s top-flight participation. Here is our analysis for the upcoming encounter:

Great Olympics vs Hearts of Oak: Our Top Predictions

Great Olympics is looking for the first win in five matches when it hosts the Hearts of Oak outfit in the coming encounter. Below are our top picks for the upcoming game:

There will be two or three goals the coming encounter:

Back the hosts to get back to winning ways

Great Olympics secured nine wins this season coming to the last home match. The hosts secured two wins from their last five home matches, a run that included games against the first two teams in the league standings. We are backing the hosts to repeat the trick of the reverse fixture against the Hearts to secure a home win.

This is a familiar fixture in the Ghanaian top-flight men's tournaments. The two teams are going up against each other for the tenth time. Here is our insightful preview:

Great Olympics seem to have grown tired of the tight run of the fixtures in the league. A single win from the last five matches does not bode well for a team that was eyeing an international competition spot. However, you can understand that the hosts played against four teams in the top five in their last five games. Great Olympics take the form of an attacking approach to games, to get all the points or face defeat.  The hosts’ only hope for a positive result oozes from the fact that the Sunday opposition only avoided defeat twice in its last five away matches.

Hearts of Oak visits OheneDjan Sports Stadium to play for pride because the CAF Champions League qualification spot is beyond reach with the remaining two matches. The visitors in this fixture are not finishing the season with shoulder-high following a streak of one win in ten away games. The Hearts have lost seven matches this season.

It will be difficult for the manager to turn this around and instead, he will be eyeing the home game to wind up the season in style in front of the home crowd. However, having won four times in this fixture, we expect the visitors to give a good account of their strength in this encounter.

FAQs about Great Olympics vs Hearts of Oak 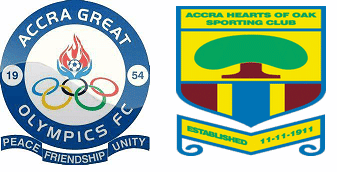 What is the venue for the upcoming Great Olympics vs Hearts of Oak?

OheneDjan Sports Stadium is the venue for the coming encounter.

What was the outcome of the reverse fixture in the Great Olympics vs Hearts of Oak?

When will Great Olympics vs Hearts of Oak kick-off?