One of the more interesting matches to be played on Thursday in La Liga is the Granada vs Real Sociedad duel, so check our preview of this game to find out more about it.

Free betting picks and tips for Granada vs Real Sociedad

If you are looking for the best La Liga betting predictions, we've got you covered right here, including our top betting tips for Granada vs Real Sociedad:

Real Sociedad is in much better form than Granada, which is still looking for their first win of the new season. However, Real Sociedad also has too many injured players to count at the moment and Granada nearly beat Barcelona in the last round, forcing Blaugrana to fight for a draw and get it in the stoppage time. Also, Granada beat Real Sociedad in two of their last three meetings, so our prediction is for Granada to win this game.

The best stats and top odds for Granada vs Real Sociedad

You don't have to waste a lot of time to find the best Granada vs Real Sociedad odds, just check our selection of odds from the best UK bookies:

Their success in the Europa League from last season when they reached the semi-finals made Granada a household name in Europe but the team has struggled at the start of the new La Liga season. After five matches, Granada has three draws and two losses, including a surprising and demoralizing 4-0 loss against Rayo Vallecano. However, Granada was minutes away from beating Barcelona at Nou Camp this weekend, so thigs could be looking up for them. Eteki and Lozano are injured and unlikely to play against Real Sociedad.

After a great last season, Real Sociedad started the new season in La Liga even better, with three wins, one draw, and one loss. This is enough to put them in the fifth place at the moment. The team also drew with PSV in Eindhoven in their Europa League premier last week. The most impressive is the fact that Real Sociedad did all this while dealing with huge injury problems since the team's injury list is too long to list here.

The most frequent questions for Granada vs Real Sociedad 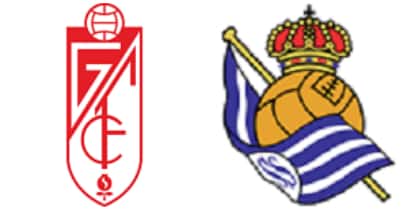