The last game in this round of La Liga is the Granada vs Cadiz duel and we have prepared a detailed preview of this match, along with some free betting tips.

Our top Granada vs Cadiz betting predictions and tips

If you need some help to find the best Granada vs Cadiz bet, check our favourite betting tips for this duel:

While four of the last five h2h duels between Granada and Cadiz have ended in draws, we can see Granada winning this game, despite the fact that they have lost five games in a row.

The reason is simple – we believe that Granada is the better team than Cadiz and this is a great chance for them to break the losing streak and get further away from Cadiz and other teams in the relegation zone.

Both teams have scored in three of the previous five h2h meetings between Granada and Cadiz, so we won't be surprised if that is the case once again on Monday.

In addition to this, both teams have scored in 60% of all Granada matches in La Liga so far, while the same thing happened in 52% of all Cadiz games in the league this season.

The best odds and useful stats for Granada vs Cadiz

If you want to place a bet on the top Granada vs Cadiz odds, check our selection of odds from the best UK betting websites:

This game should be a close one, so let's take a closer look at both teams before their meeting:

Things are probably at their worst point at Granada right now since the team lost five games in a row and they are now only five points ahead of the first team in the relegation zone and their next opponent Cadiz. So, a win in the next game would be huge for them, both from the standpoint of getting further away from other relegation candidates and with a view to break the losing streak.

Granada will be without Neyder Lozano, Santiago Arias and Maxime Gonalons in this game through injuries, while Sergio Escudero is questionable.

It's been a tough season for Cadiz until now and the team is in a very dangerous spot at the moment since they are currently in the relegation zone and five points behind the first team outside of it – their upcoming opponent Granada. In the last six games in the league, Cadiz has one win, three draws, and two losses, which is not enough to get them up the standings.

The team will be without Alfonso Espino through suspension, while Tomas Alarcon is questionable with an injury. Other than that, Cadiz has no further personnel problems.

The most common questions for Granada vs Cadiz 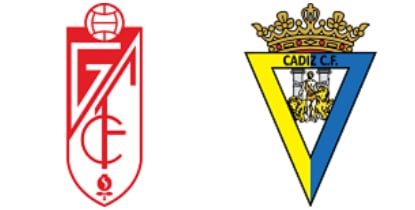