There’s always a bedding in period for new signings, especially when they happen mid-way through a season. But as we head into April, the additions bought in January have had the best part of two months to find their feet with their new employers.

Unlike previous winter windows, there was a lot of movement and Premier League clubs didn’t waste any time flexing their financial muscle – Liverpool, Southampton, Arsenal and Brighton all smashed their transfer records. Big money being spent is closely followed by quick judgments being made. If anything this is amplified in the top flight of English football.

With this in mind, we’ve analysed some of the more eye catching moves from January and, putting club allegiances aside, given them a grade.

Some may claim it’s premature to mark them already but this is just an initial grade – it can be revisited down the line. And, though clubs give the impression otherwise, arrivals are expected to make an immediate impact.

Courted by Manchester City for the best part of a year, if reports are to be believed, Manchester United pulled off a shock by securing the signature of the Arsenal forward ahead of their neighbours.

There were question marks over exactly whether he was needed at Old Trafford with José Mourinho already having Anthony Martial and Marcus Rashford at his disposal. Still the best way to shut the doubters up would have been to perform on the pitch, something the former Barcelona forward has failed to do.

There's no way to dress it up, the United No.7 is floundering in Manchester. The Red Devils may have won four of the six Premier League games he's featured in but from an individual point of view he's failed to live up to the hype.

Key passes per 90 are also down but completed dribbles are up. However, he is now being dispossessed more often.

It paints a picture of a player who feels as though he's got to do everything by himself. Perhaps he does but he's suffering because of it.

Huddersfield Town's capture of Kongolo was viewed as a coup when the deal was announced. This was a player linked with a number of top clubs before he made the move from Feyenoord to Monaco. The Ligue 1 champions loaned him out in order for him to get more first-team football under his belt.

It's not been a dream start for the 24-year-old, however. In his four starts in the Premier League the Terriers have conceded eight goals, although they have come up against Manchester United, Liverpool and Spurs.

But it does appear Kongolo is struggling to adapt to the rigours of the English top flight and the stats back up that theory. There's no shame in that but the Terries should have maybe targeted a player who could have made an impact from the off given they're in a relegation battle.

Of the Huddersfield defenders, Kongolo has the fewest number of passes attempted out of the regular starting centre-backs and his pass success rate is the lowest when compared to the same players, just as is his aerial duels won per 90 minutes.

Ayew's return to the Liberty Stadium was seen as a positive move by those in charge of recruitment at Swansea City. The forward knew the club, having caught the eye there before his big money move to West Ham United, and his brother was there to help him get up to speed quickly.

Yet in his four appearances since his return he's failed to put the ball in the back of the net and has just an assist for all of the effort. However, the Swans have picked up wins in two of those matches.

In terms of xG90 he's 0.16 behind Jordan and is currently as threatening as Federico Fernández. It's not been the homecoming many had envisaged.

Arsenal parted with a reported £57million, a club record, to bring Aubameyang to the Emirates and it was dressed up as a statement of intent. Though, if truth be told, it was probably more on the panic buy side of the transfer spectrum.

He was supposed to be the signing to get the Gunners back on track after a disappointing first half of the campaign resulted in the the club finding themselves in in sixth position. Alexandre Lacazette, a record buy in the summer, was struggling to recapture his Lyon form and Sánchez was now under the control of Mourinho.

The Gabonese speedster scored on his debut, a 5-1 win over Everton, and Arsenal appeared to have their swagger back. However, the following four matches in the Premier League yielded just one win. Defeats to Tottenham Hotspur, Manchester City – a game in which the Arsenal forward missed a penalty – and Brighton weren’t part of the script.

A goal and an assist in the 3-0 win over Watford, however, meant he is averaging a 0.6 goals per 90 since his move to London. An impressive record for most but down on the 0.81 he was averaging for Borussia Dortmund.

His xG is down as well from 1.05 to 0.68,  although still the highest at the Emirates. This coincides with him averaging fewer shots, with Aubameyang relying on volume.

Some fans may be underwhelmed but the 28-year-old is doing exactly what he was signed to do. 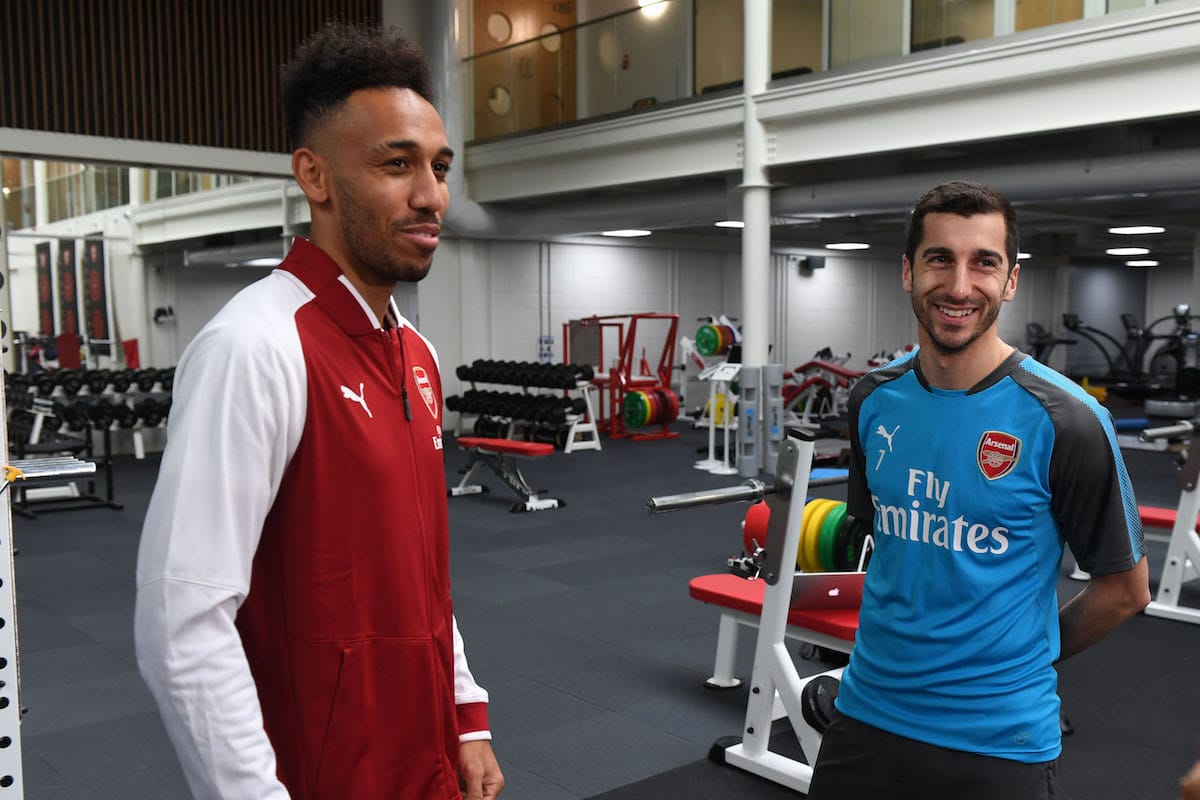 Mkhitaryan’s move to the Emirates was completed in the shadow of Sanchez going the opposite way. But then the 29-year-old went from being underrated to overrated in the space of a day with fans believing he could rediscover his Dortmund form now that Mourinho wasn’t shackling him.

People were passing the move off as a masterstroke by Arsenal. His first start for the Gunners was in the 5-1 win over Everton. He grabbed a hat-trick of assists and looked the real deal alongside Aubameyang and Mesut Özil.

He’s added a goal and assist in the four following league matches, both arriving in the 3-0 victory against Watford. In a way, his form mirrors that of Aubameyang.

The difference is Mkhitaryan was signed to primarily create. He’s averaged more shots per 90 minutes but playing fewer key passes and not completing as many dribbles. But his xA90 has improved by 0.21 to 0.54 – the best in the Arsenal squad.

To put it bluntly, from a creative point of view he’s holding up his end of the bargain.

Everton stumped up more than £20million to sign Walcott. The former Arsenal winger added much needed speed to the forward line at Goodison Park and he had an immediate impact, grabbing an assist against West Brom on his debut before netting twice in a 2-1 win over Leicester City.

Since then he's added an assist to his tally in the 2-1 win over Stoke City. The 29-year-old is thriving in a first-team role and showing those watching exactly why he still has something to offer to England.

His xA90 since the move is 0.28 – the highest in the Everton squad and his xG90 score of 0.35 puts him in fourth position. He's making more key passes and completing more dribbles than he did during his last full season with the Gunners.

Furthermore, no player in the Everton squad has completed more dribbles per 90 and only Gylfi Sigurdßon can boast a better key passes per 90 stat since Walcott joined the Toffees. 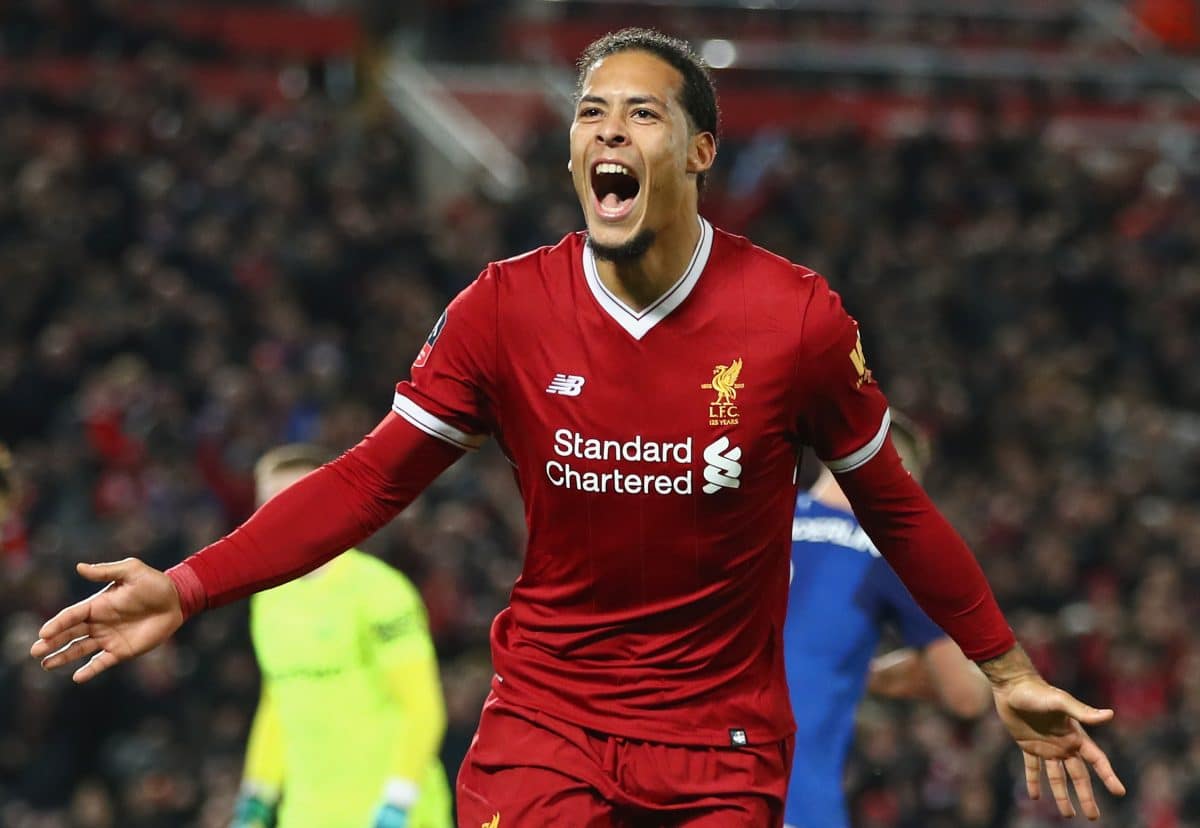 Liverpool's six-month pursuit of the Dutch centre-back eventually had a happy ending. The Reds parted with £75million, a world record fee for a defender, to bring the Southampton man to Anfield.

As far as debuts go, van Dijk's was a fairytale: He rose highest in the final few minutes of a Merseyside derby to head home the winner at the Kop end.

But he wasn't signed for his goal threat. He was identified by Klopp as the solution to the club's defensive woes. Since his arrival, Liverpool have played seven matches in the Premier League and have conceded six goals at a rate of 0.85 goals per 90. It's an improvement on the 1.12 the Reds leaked on average before the Dutchman moved north.

In terms of xGA (expected goals against), Liverpool are conceding fewer high quality chances. Now, this isn't necessarily directly down to the 26-year-old but his influence on the team defensively has been there for all to see.

There have been occasional lapses from the team as a unit, in games against Spurs and Manchester United, but there are now firmer foundations in place for the Reds to build on.

Heading into March it looked as though Tosun had been an expensive mistake for Everton. He'd failed to open his account for the club and wasn't being selected regularly despite Turkish fans taking to social media to question Sam Allardyce's use of the forward.

But then it clicked.

Tosun found the back of the net against Burnley and the floodgates opened. The 26-year-old now has four goals in his last three matches and has helped the Toffees to six points just as it appeared as though they might be slipping into a sticky situation having picked up just eight points from the previous 30 on offer.

He's now the club's third highest goalscorer this season despite having only featured in 424 minutes worth of Premier League action. Only Wayne Rooney and Oumar Niasse have more goals to their name with the former appearing in 1,500 more minutes and the latter being 500 minutes up on the Turkey international.

Allardyce was seemingly biding his time with the £27million signing and getting him up to speed. A Big Sam masterclass? 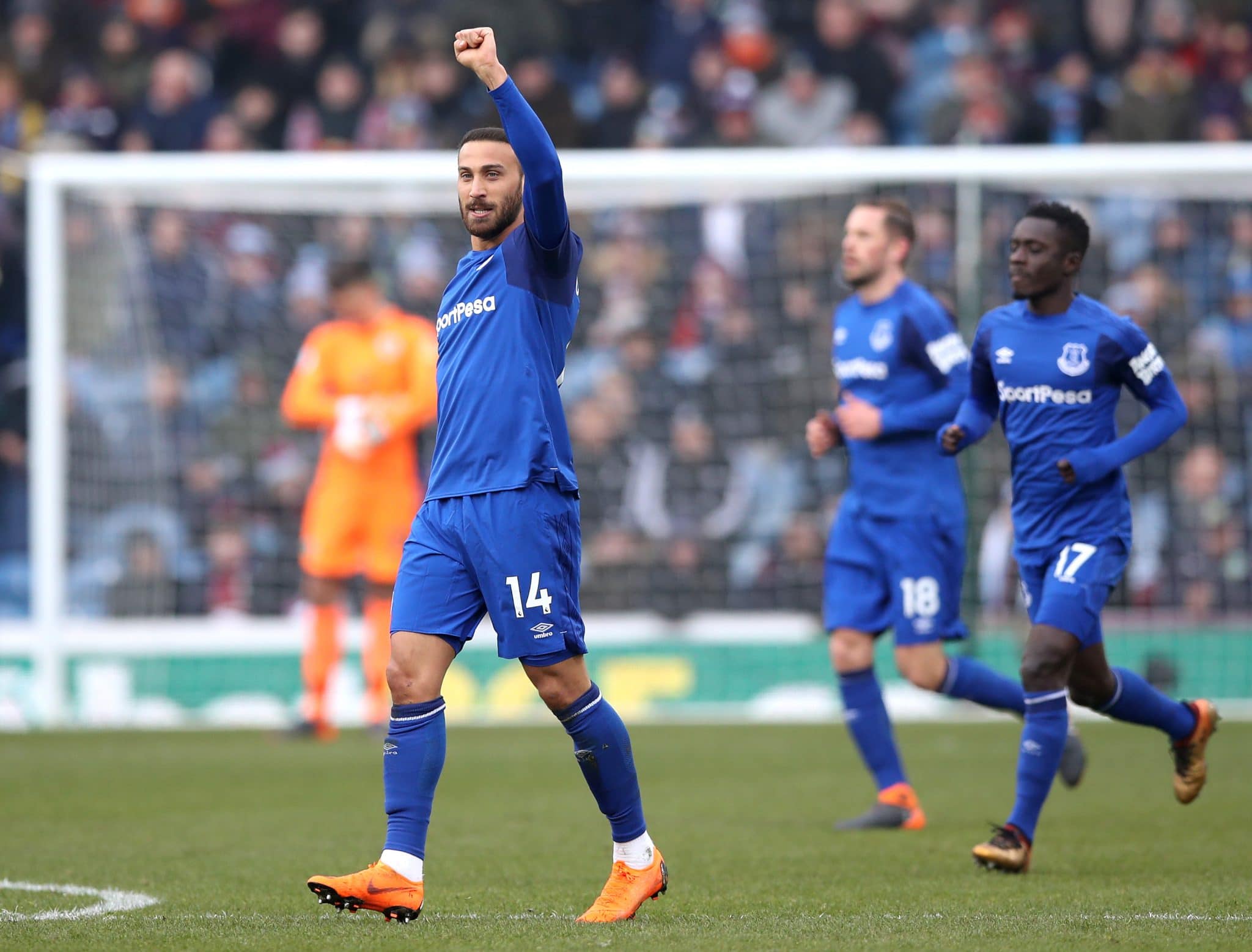 The 30-year-old made the move to Burnley to make room for the new signings in the Everton squad. It wasn't a switch that made people sit up and take notice and, if anything, it felt a little like Jonathan Walters' transfer in the summer; he provided depth and experience.

However, Lennon has made the most of the first-team opportunities since the transfer. He completes 100 per cent more tackles per 90 minutes (2.2) since his move to Turf Moor, something no player in Sean Dyche's squad can better. He also makes more key passes and averages more completed dribbles – the third highest in the Burnley squad for both stats.

When looking at xA90 numbers it's the former Leeds United wonderkid who tops the list for the Clarets with his 0.17 total.

He's managed to keep 23-year-old loan signing Georges-Kévin Nkoudou out the starting XI and his inclusion in Dyche's team is warranted. 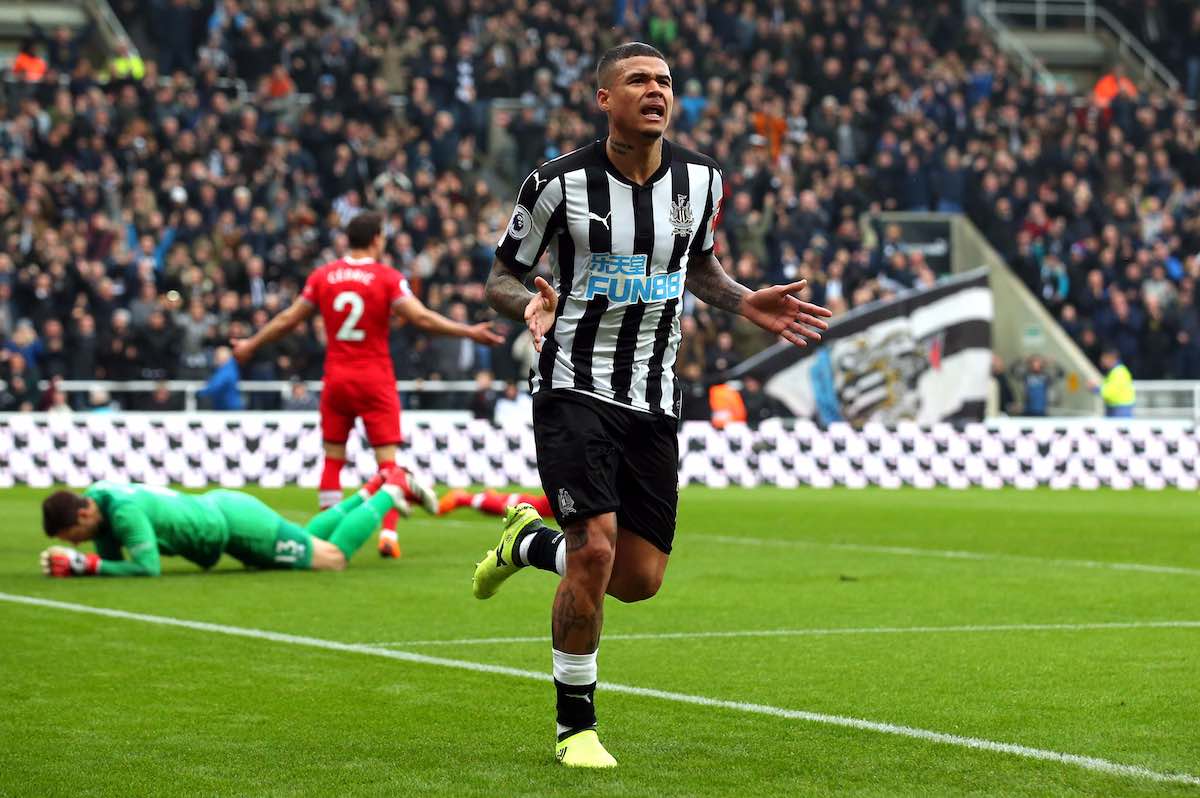 It was a toss-up between the on-loan Chelsea winger and Martin Dúbravka. The 29-year-old keeper caught the eye on his debut against Manchester United, even managing to steal the spotlight away from David de Gea.

Rafael Benítez's men are now conceding fewer goals per game (one) than they were before Dúbravka's arrival (1.38), however, the defence wasn't Newcastle's biggest issue.

It was at the opposite end of the pitch that the Magpies struggled. It has gone somewhat under the radar but Kenedy's impact could be the reason St James' Park is hosting Premier League football next season.

In 445 minutes of Premier League action he's scored two goals and grabbed an assist. He's third on the xG90 and xA90 lists.

The 22-year-old averages the highest number of shots per 90 in the Newcastle squad and only Jonjo Shelvey and Matt Ritchie play more key passes. He's second on the list for completed dribbles behind Jacob Murphy.

He's had quite the impact on the Benítez's forward line, just what they needed.