There are certain transfer rumours that just refuse to die.

Nicolás Gaitán, for example, was perennially linked with Manchester United while at Benfica. Leandro Damião never surfaced at Tottenham Hotspur despite months of speculation, and German star Julian Draxler is yet to join Arsenal.

Another player who's attracted several admiring glances from the Gunners is Mario Götze. The German playmaker was first linked with a move to the Emirates in 2012, when he was a precocious 19-year-old emerging at Borussia Dortmund under Jürgen Klopp.

Over the years, there has been further tentative speculation, like in 2016 when his Bayern Munich career stalled.

He eventually rejoined Dortmund, of course, but spent much of his first season back battling myopathy, a muscular disorder which sidelined him for six months.

The club managed his playing time carefully upon his return and, having re-established himself during Peter Bosz's doomed tenure, he has caught the eye at times under Lucien Favre, scoring eight goals and adding seven assists as Dortmund came up just shy in their quest to end Bayern Munich's Bundesliga dominance.

Götze's renaissance has revived Arsenal's interest, which has caused the 27-year-old to stall on his contract negotiations with Dortmund. His current deal expires in 2020.

If reports are accurate, Unai Emery wants to incorporate the 2014 World Cup hero into his plans as a replacement for Juventus-bound Aaron Ramsey.

Although clearly talented, would Götze be an adequate replacement for the Welshman?

Before we delve deeper into their stats and respective styles, the Football Whispers player persona model highlights a couple of key differences.

Based on data going back to August 2016, we can see that Götze is actually more proficient in chance creation, dribbling and crossing. Ramsey, meanwhile, tends to shoot more, undertakes more defensive duties and is a prominent figure in Arsenal's build-up passing.

However, last season they performed different roles in two wildly contrasting systems. Whereas Ramsey was largely deployed in central midfield alongside Granit Xhaka in Emery's 3-4-1-2 throughout the 2018/19 campaign, Götze took up a more advanced role in Favre's system, often the central playmaker behind the striker or as the furthest man forward, functioning as a false 9.

The most obvious position for Götze in Emery's Arsenal is in the hole between the midfield and the attacking partnership of Pierre-Emerick Aubameyang and Alexandre Lacazette, which has recently been occupied by Mesut Özil.

Of course, it's worth mentioning that Götze has functioned behind Aubameyang in the past. In the early months of the 2017/18 season, the German operated as the No.8 in Bosz's 4-3-3 with Aubameyang leading the line, so there is scope for the Gabon striker forging an effective understanding with Götze like the one he has with Lacazette.

In 2017/18, Götze started half of Dortmund's Bundesliga games but was only involved in five goals. He greatly improved his output in 2018/19 though, managing 15 direct goal involvements to triple his previous haul. 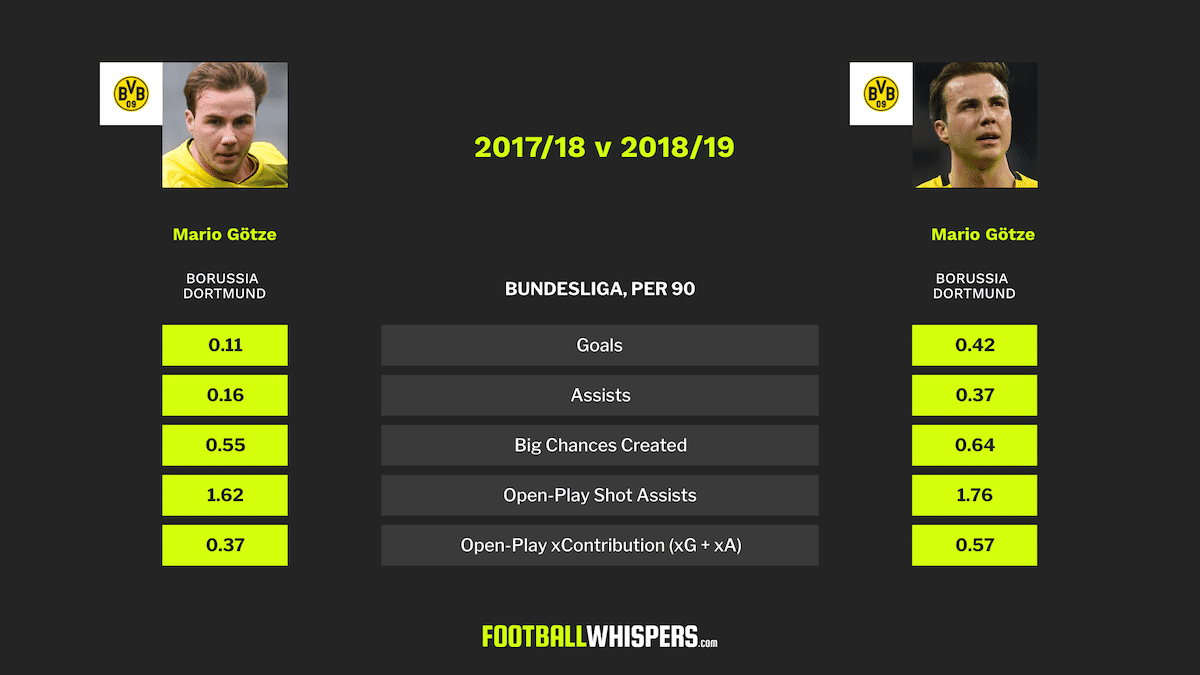 Indeed, as an intelligent playmaker who often drops deep or moves wide to find space, he is one of German football's most prolific creators. Since the start of 2017/18, he ranks fourth in big chances created per 90 with 0.6, behind Thomas Müller, Miloš Jojić and James Rodríguez.

And for all the praise Jadon Sancho has deservedly received during his breakout year, Götze created big chances more frequently than the young Englishman as well as surpassing his expected goals assisted per 90 (0.28 to 0.31).

When he plays, Dortmund's No.10 can be relied on for creating quality chances for his teammates. Having completed more accurate through balls than any other attacking midfielder in the Bundesliga, Arsenal's interest should come as no surprise.

The consensus among Dortmund fans during his first year back was that while he offered flashes of his former self, he failed to evoke the outstanding technician who emerged at the start of the decade.

It's been much more positive this season. Looking a little trimmer, he covered on average 12km per game in 2018/19 and impressed during Marco Reus' absence through injury in February. 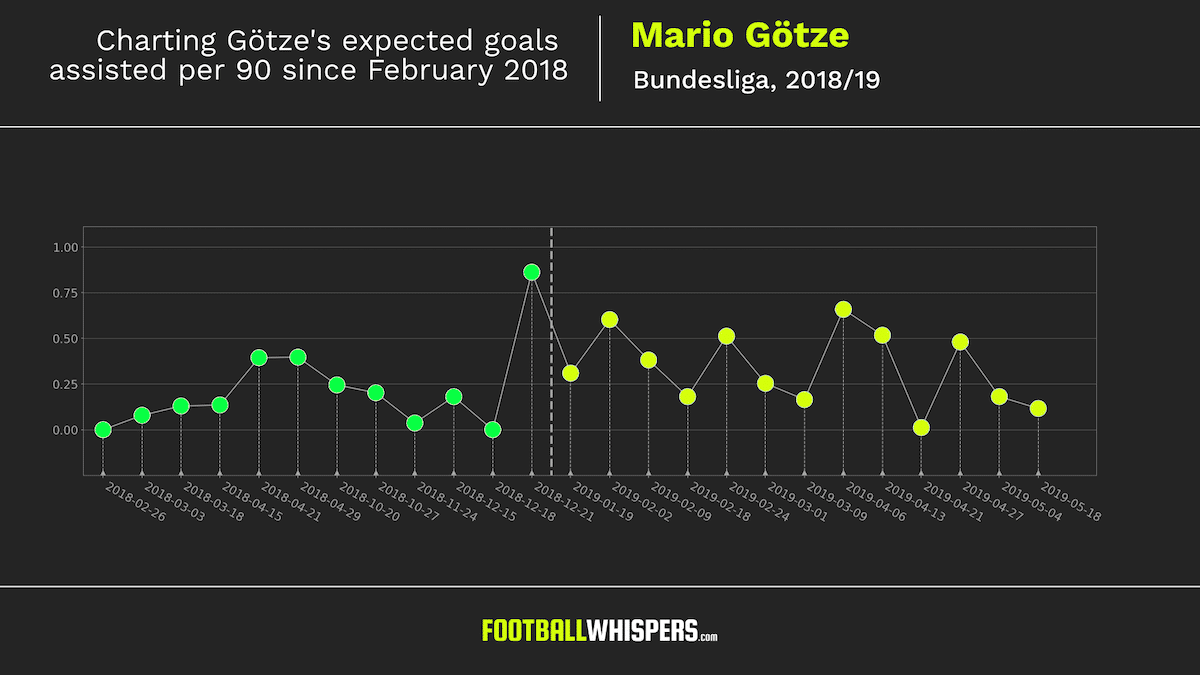 But Dortmund's double acquisition of creative talents Thorgan Hazard and Julian Brandt may have given Götze food for thought. With Ramsey departing and Özil seemingly in decline, there may well be a clear path into the Arsenal team.

Having just turned 27, he can potentially offer the Gunners three or four good years at an elite level and, given his contract expires in 2020, a cut-price deal would be an impressive piece of business for the north Londoners.

He won't single-handedly elevate the team to a title challenge, but few players on the market will. What he would offer, however, is considerable creative prowess, and a skill-set that can be put to good use while working behind two of the Premier League's most dangerous strikers.