There are few players in world football as coveted as 22-year-old Schalke midfielder Leon Goretzka right now. The young Germany international is out of contract at the end of the current season and has a host of elite sides chasing his signature.

Noted as a hugely talented prospect for some time, Goretzka has flourished in Gelsenkirchen of late, developing into one of the Bundesliga's best and most complete midfielders.

Over the past few weeks it looked like his future had been decided, Bayern Munich had reportedly sealed a deal to sign him in the summer.

“We would be crazy if we did not think about signing a German international whose contract runs out,” Karl-Heinz Rummenigge, Bayern's executive board chairman told Sky.

“Now it is up to the player to decide, and it would be nice if he chose Bayern in the end. You only have an agreement when you sign the contract.

“All top clubs like Real Madrid, Barcelona, Manchester United or Juventus wanted him, so it is perfectly legal and normal that the top club from Germany is interested in this player, too.

“The decision will be taken in a few days.”

Also known to be a Liverpool transfer target, the Reds are still confident they can agree a deal for the 22-year-old, using Jürgen Klopp's influence as a way to lure the international.

Who is Leon Goretzka?

Schalke signed Goretzka from Bochum in the summer of 2013, paying a reported €3million for the then-teenager.

The youngster quickly became a regular feature of Die Knappen's first team, playing 24 Bundesliga games in his maiden campaign with the club.

At the end of his first season with Schalke, Goretzka's mature performances had caught the eye of Germany boss Joachim Löwe, who selected the youngster for his preliminary 30-man World Cup squad in 2014.

An international debut soon followed but Goretzka was denied the chance to participate in Die Mannschaft‘s World Cup triumph due to injury, although it was arguably unlikely he would have made the final cut for the 23-man selection.

In the last 18 months, however, Goretzka has made huge developmental leaps. After finishing last season with eight goals from 41 appearances for Schalke, the 22-year-old starred in Germany's Confederations Cup success and top-scored with three goals.

This season, under new boss Domenico Tedesco, Goretzka has become even more crucial to the way Schalke play, tasked with being the energetic heart of the side's midfield, breaking up opposition attacks, conducting play from deep and bursting forward to score – he already has five Bundesliga goals to his name – in his box-to-box-role.

What are Goretzka's main strengths?

As far as the skills desired in any top-level midfield player, Goretzka has everything. He reads the game well, finds space intelligently, possesses near-flawless technique and has an eye for goal. 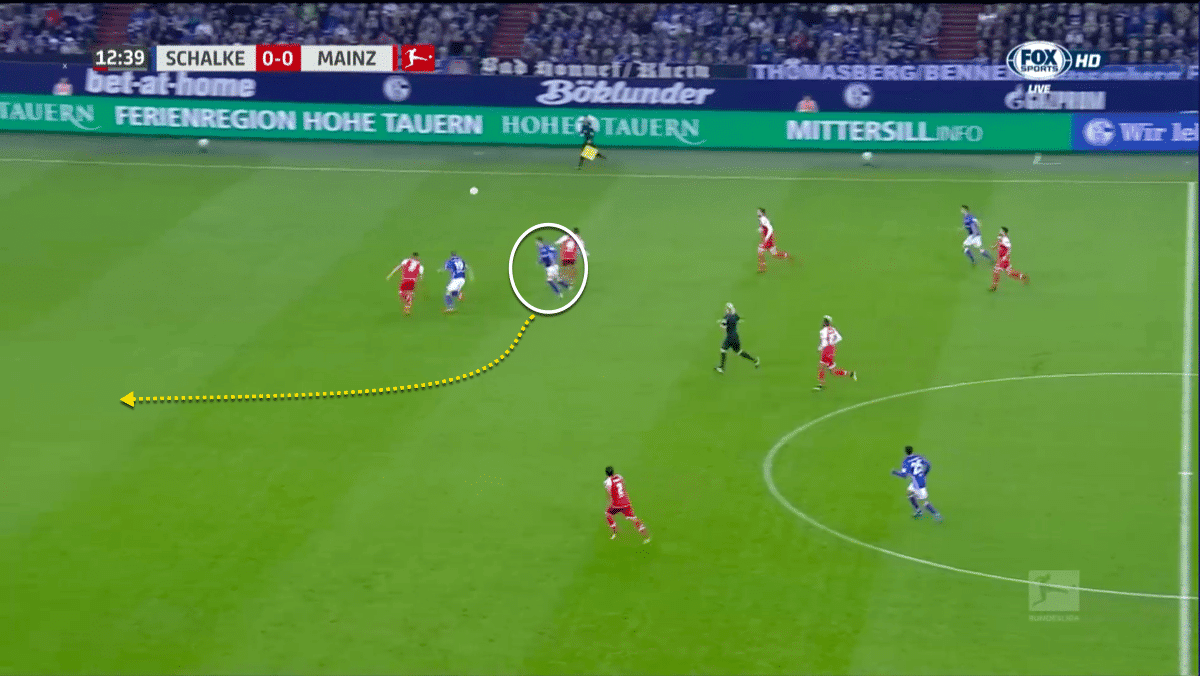 Above, taken from a recent game against Mainz, we see how Goretzka identifies space in advanced areas and commits to breaking forward to join the attack.

With the ball wide on the right and the Mainz defence drawn apart, Goretzka arcs his run into the open zone. 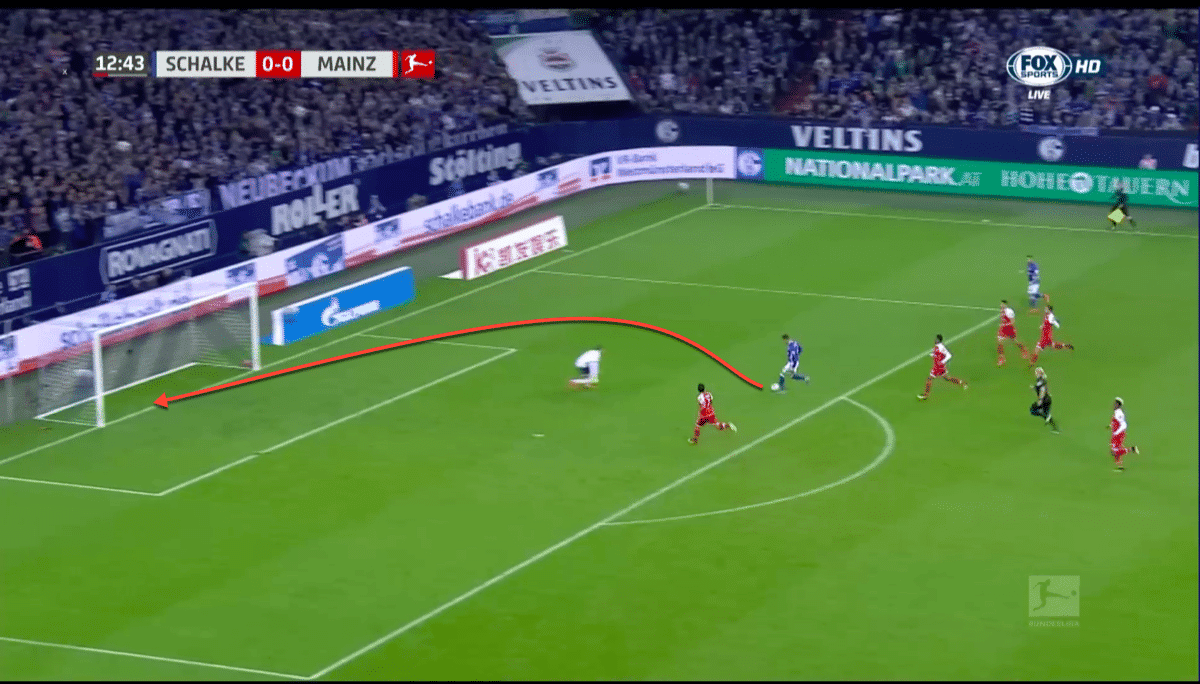 When played through, he takes the ball in stride and confidently lifts it over the onrushing goalkeeper, evidence of his improving composure and how his finishing technique has developed.

Goretzka is more than a mere goal-scorer, though, he is capable of sitting deep to conduct play, utilising a fine range of passing and the kind of vision that allows him to quickly identify team-mates in space. 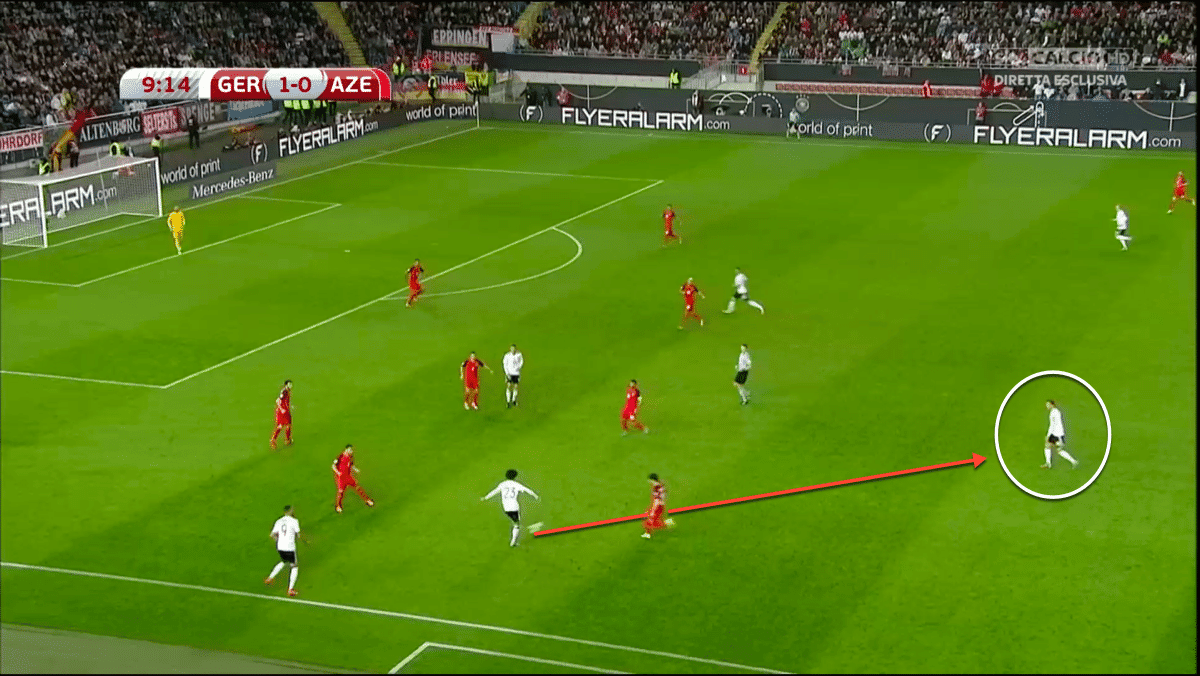 As we see here, in action for Germany against Azerbaijan, Goretka has positioned himself centrally, on the end of the attacking third, and is offering himself up as a simple passing option for Manchester City winger Leroy Sané. 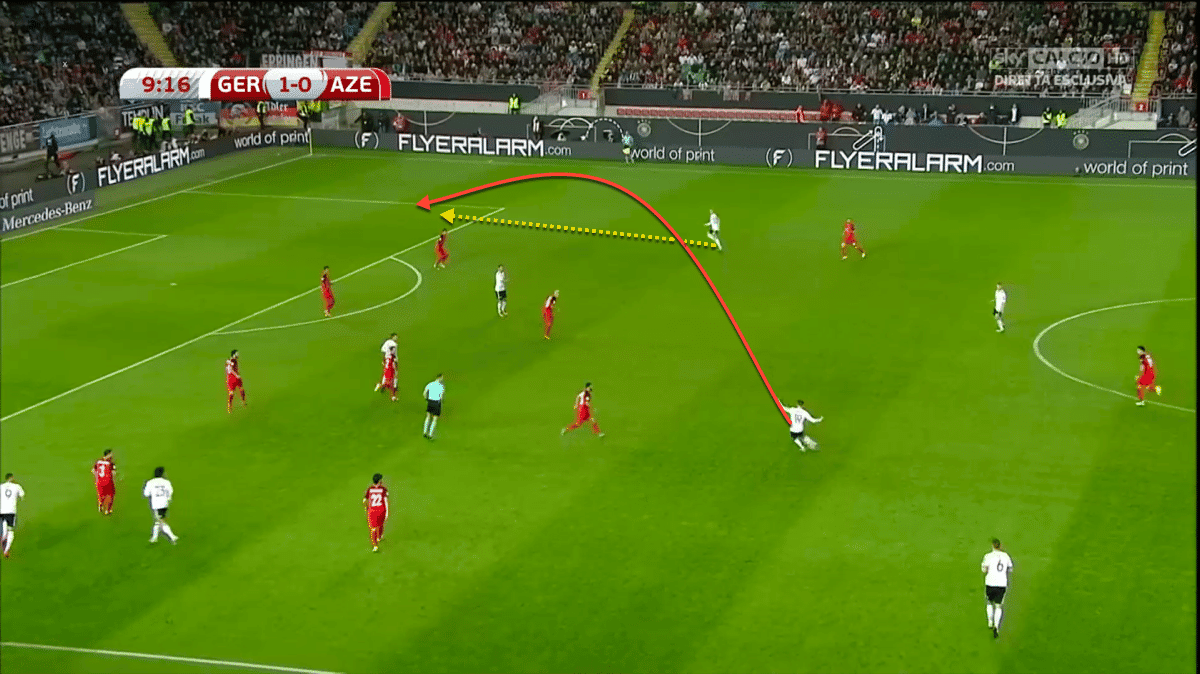 The Schalke man already has a picture of the pitch in his head, and knows exactly where his wants to send the ball before he's received it.

Spotting the run of Julian Brandt down the right wing, Goretzka lets fly with a sumptuous 30-yard pass right into the Bayer Leverkusen winger's path.

What are Goretzka's main weaknesses?

In truth, there is not a while lot wrong with Goretzka's game, despite still being in a relatively early stage of his career.

If there are areas he can improve on, one would certainly be the consistency of his final ball. The German is capable of splitting defences with his acute vision and fine execution, but he could work on doing so more regularly and reliably.

And if a box-to-box role is where his future lies, he would be well served by upping his aggression levels slightly. Although he is a capable ball-winner – averaging 2.1 interceptions and 2.8 tackles per 90 so far this season – he is dribbled past 1.8 times per 90 minutes on average.

If he is, for instance, asked to perform as part of a double pivot in a 4-2-3-1 formation, he would need to improve his ability to halt the opposition's progress slightly. 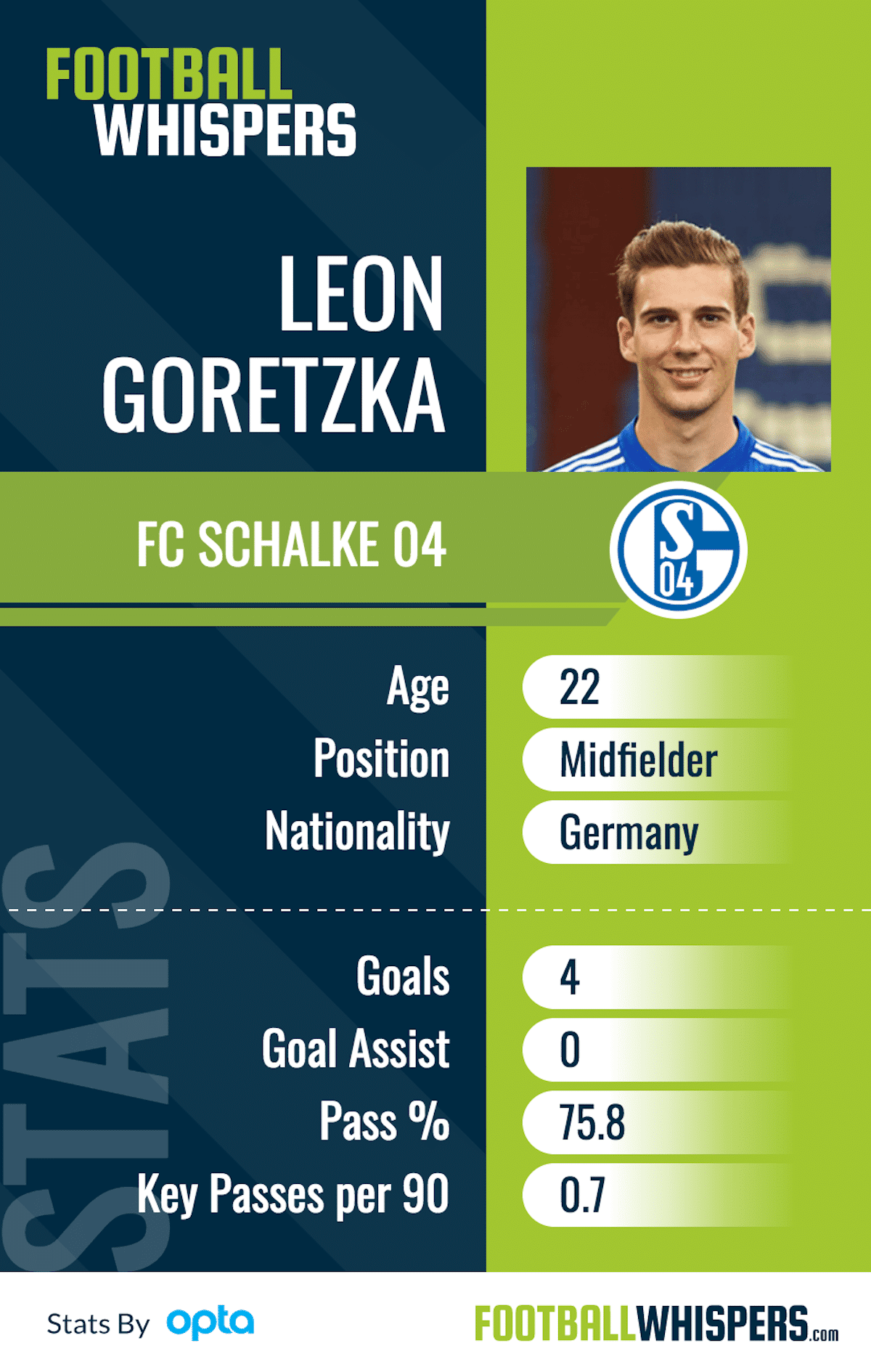 As Goretzka's role this season has evolved to see him become more of a direct goal threat, his creativity stats have declines somewhat, with his key-passes-per-90 average falling to 0.7 from from 1.3, while his shots-per-90 average has risen from 1.8 to 2.6.

How much is Goretzka worth?

In the current market, considering his level of ability and high future potential, Goretzka could easily be valued at around £50million.

However, prospective interested parties need not worry about such a figure as he will be available for free at the end of the current season.

He is out of contract at the end of June 2018 and extremely unlikely to renew terms with Schalke. As such, he will be free to negotiate a summer transfer away from Gelsenkirchen in January.

Why top Premier League clubs should try to sign Goretzka

Standing 6ft 2ins, Goretzka has the physical tools to cope with the rigours of the Premier League, while he is also sufficiently athletic to keep up with the intense pace of the English top flight.

Still only 22, he is constantly improving and is at an age where he is primed to be shaped into a certain style by a new manager. If a box-to-box dynamo is needed, he's your man; if you are looking for a goal-scoring midfielder, he can do that too; if you want someone to sit at the base of midfield and spray passes around the pitch, Goretzka has that ability in his locker.

Already one of the Bundesliga's best, Goretzka's steep upward trajectory has him set to become one of the finest midfield players in world football over the next decade.

And considering he is available for free, there is no better-value option in Europe right now.